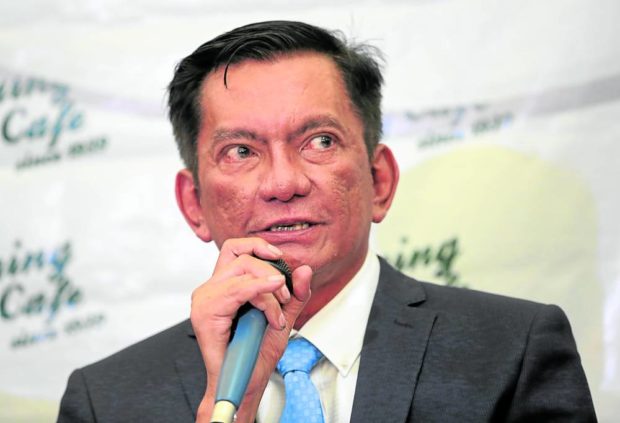 MANILA, Philippines — Amid reservations expressed by other lawmakers, a member of the House of Representatives in charge of refining the Maharlika Wealth Fund bill on Saturday said he was open to more discussions on the various assets where the fund would be invested in.

In a statement on Saturday, Salceda said House Bill No. 6398 would still go through deliberations in both the Senate and the House. “As chair of the House technical working group on the bill, I welcome continued discussion on the matter. I am sure Senator Marcos will also be very active in discussions once the Senate begins hearings on the bill,” he said.

Marcos on Friday told reporters that she objected to using pension funds from the Government Service Insurance System (GSIS) and the Social Security System (SSS), and investing them in foreign corporate bonds.

The senator also pushed for transparency and accountability in the management of the sovereign wealth fund.

Salceda expressed openness to discussing the “mix of assets that the fund will invest in.”

“Some allocation for foreign securities is necessary,” he said. “It diversifies the portfolio and allows the fund to take positions in potentially higher-return investments. A fund that grows faster due to some exposure to high-return foreign investments is better than a smaller and severely constrained fund exclusively investing in domestic investments.”

Salceda said he would welcome a proposal to ensure that a certain percentage of the fund would be placed in domestic investments.

But specifying which investments are allowed per government financial institution may “not be possible” under the bill approved by the House banks and financial intermediaries committee.

“Pooling of funds is a key feature and advantage of the current proposal, since it maximizes the impact that GFIs can make compared to what they can achieve on their own. That said, we can prioritize certain investments in agriculture, infrastructure, and health care,” Salceda said.

He also reiterated his earlier assurance to the public that the funds from the GSIS and SSS would have “zero risk” as the investments would be in the form of preferred shares and convertible debts.

“Finally, on the concern about Bangko Sentral ng Pilipinas investments in the form of foreign reserves, we have already amended the provision so that the BSP’s required investments come from declared dividends, not foreign currency reserves from overseas Filipino workers and business process outsourcing and income,” Salceda said.

The proposed Maharlika Wealth Fund was met not just with reservations from senators but opposition from other groups who questioned the use of funds from the SSS and GSIS that belong to private individuals—workers in the government and the private sectors.

Opponents have launched the “Hands off our SSS and GSIS contributions, NO TO House Bill 6398!” petition at Change.org. It has gathered more than 11,300 signatures as of 9:30 p.m. on Saturday, two days since it was launched.

The principal authors of the bill include Speaker Martin Romualdez, a cousin of Mr. Marcos, and House Deputy Majority Leader Ferdinand Alexander Marcos, the President’s son.

In the version of the bill approved by the banks committee on Thursday, the President was to be the chair of the Maharlika Wealth Fund Corp., the state company that would manage the country’s sovereign wealth fund.

The measure proposes an initial investment of P250 billion pooled from the GSIS, SSS, Landbank and DBP, plus P25 billion from the national government. The money will be then invested in high-yield outlets.The petition against the bill cited, among other objections, the lack of representation from the GSIS and SSS members in the management of the fund.

It also pointed to the President being head of the fund management company, saying that he is the son and namesake of the late ousted dictator who ruled the country with an iron fist.

“We don’t want the fox to guard the chicken coop, right? We will lose all the chickens! Have we not learned from 1972 to 1986?” the petition said.

On Saturday, the Alliance of Concerned Teachers of the Philippines (ACT) joined the opposition to the bill.

Ruby Bernardo, president of ACT-National Capital Region, called the proposed measure a “sinister plan of the Marcos family syndicate” to gamble the future of public workers and to entrust teachers’ hard-earned pension funds to “dubious hands.”

“How dare they even think of dipping their fingers in our hard-earned pension funds? For most of our productive years, working people live off on scant wages further deducted with pension funds, hoping that we will not go hungry upon retirement,” Bernardo said in a statement.

She also cited “suspicious” provisions in the bill that gives exemptions from taxes, procurement laws and competition laws.

“Corruption of public funds is rampant even with these existing laws. What then could happen to our pension without those protection laws?” Bernardo said.

—WITH A REPORT FROM MARIEJO S. RAMOS