What’s in a name? ‘Maharlika’ evokes time of mythmaking 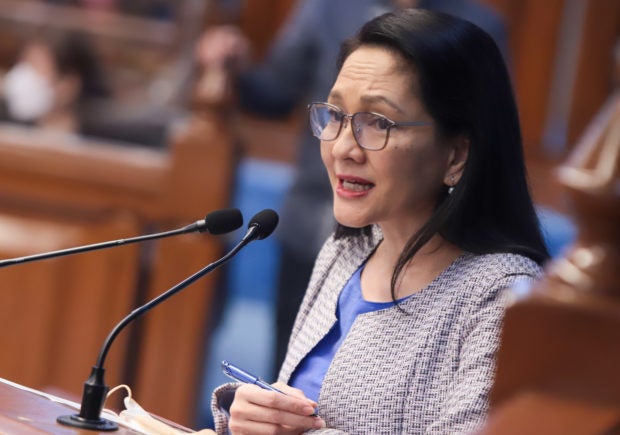 MANILA, Philippines — Ang Mga Maharlika was the supposed anti-Japanese guerilla unit led by the late dictator Ferdinand Marcos, a claim that has been repeatedly debunked.

“Maharlika,” or warrior class, was a term used and popularized by the dictator to mean nobility as a propaganda tool. A national highway and a hall in Malacañang Palace were named Maharlika.

Now, decades after Marcos was ousted, a bill in Congress is seeking to create a sovereign wealth fund to be called Maharlika.

“The mere mention of ‘maharlika’ sends me heebie-jeebies,” Hontiveros said on Friday.

“It’s part of the legacy of the martial law dictatorship, the mythmaking that they are really milking to rehabilitate those images to the detriment of accountability for human rights violations and plunder of the past,” she said.

The role of Marcos during the war, particularly his claim that he was a decorated soldier and leader of the guerilla unit, has been repeatedly discredited by research and archived documents from the United States, which ruled the country as a commonwealth before World War II.

The National Historical Commission of the Philippines (NHCP) in a study released in 2016 ahead of his burial at Libingan ng mga Bayani described his military record as one that is “fraught with myths, factual inconsistencies and lies.”

Its study was based on documents and official websites of US government agencies concerned, among other sources, and was undertaken as “part of its mandate to conduct and disseminate historical research and resolve historical controversies,” the NHCP said.

According to the commission, Marcos himself claimed he had received “major” medals — the Distinguished Service Cross, the Silver Star and the Order of the Purple Heart—but several writers and historians disputed this.

Military records repeatedly stated that the US government never recognized his guerilla unit, Ang Mga Maharlika, and his leadership of it because of grave doubts about its authenticity, according to the NHCP.

In 1986, the New York Times reported that between 1945 and 1948 various US Army officers rejected Marcos’ requests for official recognition of Maharlika, calling his claims distorted, exaggerated, fraudulent, contradictory, and absurd.

The Times added that the United States Veterans’ Administration, with help from the Philippine Army, found in 1950 that those who had claimed membership in Maharlika had actually been committing “atrocities” against Filipino civilians rather than fighting the Japanese.

“At no time did the Army recognize that any unit designating itself as Maharlika ever exist as a guerrilla force in the years of Japanese occupation 1942 to 1945,” the US Army said.

US Army documents found by Sharkey showed brief references to Marcos but no mention of any heroic deeds or medals for heroism.