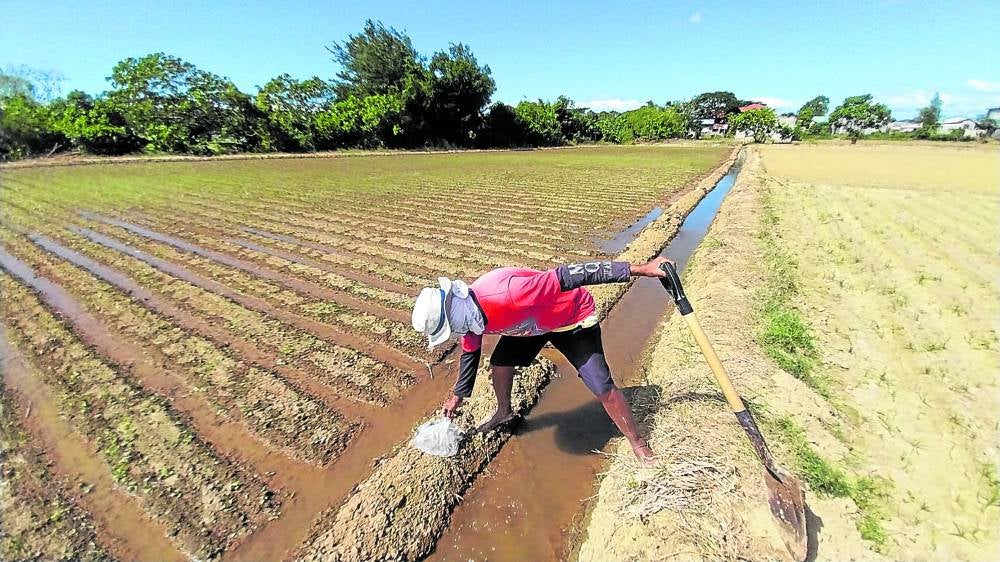 CROPPING, STRUGGLING SEASON Gerardo Pascua, 58, of Bongabon, Nueva Ecija, tends to his onion farm at Barangay Lusuk in this photo taken on Thursday. Pascua and other small-scale growers in the province complain that only big-time traders who buy their produce cheap are earning a windfall from the soaring retail price of onions. —ARMAND GALANG

BONGABON, NUEVA ECIJA—The soaring retail price of onions can already help Gerardo Pascua, 58, earn a decent, stable income and reliably put food on the table, but it has hardly been the case.

Pascua and other small-time farmers in this town, known as “the onion basket of the Philippines,” are still struggling to make ends meet and many of them have actually been forced to plant corn as an alternative crop.

Despite ranging between P280 and P300 per kilo, the prevailing market price of red onions has not directly benefited the farmers since they are still in the cropping season, according to Pascua.

In an interview on Wednesday, he said the last harvest they had was in April this year and most of the onions from that season were already sold to big-time traders, who kept the produce in a cold storage facility.

Unlike him, Pascua said, many of his fellow farmers would seldom place their harvest at the facility in Palayan City, also in Nueva Ecija, since they could not afford the storage fee. They were thus often forced to immediately sell the onions to traders at a low farm-gate price.

“Traders have been buying our harvests at P1,700 per bag, which is equivalent to about 28 kilos,” he said in Filipino.

But for Pascua, who had put some of his harvest in cold storage, any profit he would make could still shrink because onions tend to lose weight while being kept there.

“A bag of onions usually go down to about 25 kilos over a period of time while at the storage facility,’’ he said.

According to Pascua, big-time traders and farmowners would also keep their stock of onions at the cold storage facility until the next harvest season.

“All the stocks harvested (last dry season) are now with the traders,” Pascua said,

He said he and his colleagues had been baffled of late by the staggering rise in the price of onions, leading them to suspect “manipulation” on the part of the traders.

Officials of the Department of Agriculture (DA) and the Bureau of Plant Industry said they were still trying to check the supply situation and determine the cause of the rising retail prices of red onions in the market.

Pascua also lamented that the farm-gate price of onions, pegged at P60 per kilo during the last harvest season in April, could no longer help them cope with the rising cost of farm inputs.

He recalled spending at least P100,000 on his 6,000-square-meter farm as fertilizers got more and more expensive.

He said a bag of urea fertilizer, for example, would cost him P2,500, and he usually needed 13 bags of it for his farm in one cropping season.

But due to recent storms that inundated their farms and, again, the rising cost of fertilizers and pesticides, Pascua said some farmers had grown tired of devoting their land to onions.

Aside from red creoles, farmers in this town also grow other bulb varieties called yellow granex and red shallots.

Data from the DA showed that onion production in the province accounts for 54 percent of the country’s annual output.In 2019, more than 2,300 hectares of farmland here were planted to onions, according to recent reports from the municipal agriculture office.

But a year later, the total area growing the crop dwindled to 1,376.84 ha as some farmers abandoned onion production due to mounting income losses.

Pascua confirmed the reports, saying several farmers in their town have already switched to corn, which gives higher yields.He said the national government must look into their “worsening situation” and help by providing them with input subsidies.

Vergara said the measure was aimed at extending assistance to onion growers not only by increasing production and reducing costs but also providing training and marketing support.

Red onions for P300 per kilo: Supply not solely to blame