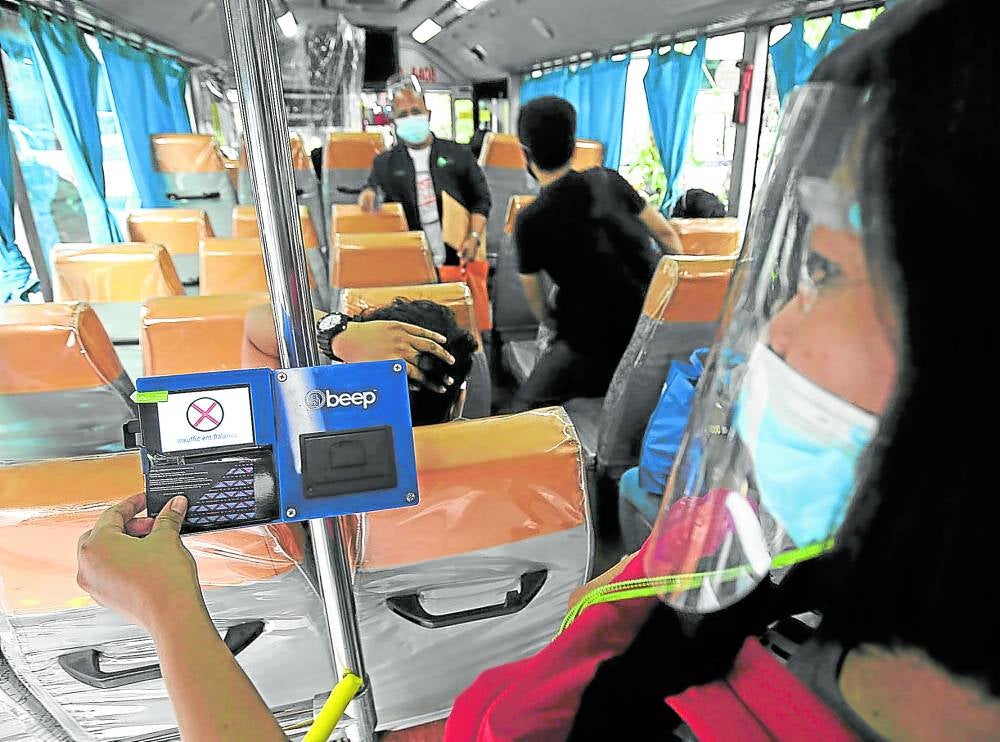 COST ISSUES AGAIN A commuter gets her fare card from a train station booth. —INQUIRER PHOTO

Amid commuter complaints of a shortage in stored value fare cards, branded as Beep cards, in train stations in Metro Manila, the Department of Transportation (DOTr) on Thursday said that the private card provider has promised to deliver 150,000 cards at the soonest time.

DOTr officials said they met with representatives of AF Payments Inc. (AFPI) and the government’s card provider claimed it had several issues in making the contactless cards that replaced the previous magnetic card system under a concession agreement signed in 2016.

“The shortage, according to AFPI, was due to issues in the supply chain of electronic chips and a special gas from Russia that are used in manufacturing the cards, as well as logistics, high production costs and the closure of manufacturing sites in China due to the pandemic,” said Randolph Clet, project manager of the DOTr automated fare collection system, in a television interview.

But commuters pointed out that despite the claimed shortage of Beep cards in some LRT and MRT stations, AFPI started selling the cards at P188 per piece, without load and excluding shipping fee, on e-commerce platforms Shopee and Lazada.

In a statement on Monday, AFPI said it launched official online stores for Beep cards to ease the shortage of cards in various train, bus and modern jeepney stations in Metro Manila, but on Facebook Marketplace, another e-commerce platform, Beep cards are being sold at P120-P150 without load.

The advocacy group Digital Pinoys on Wednesday asked the DOTr to scrap its contract with AFPI after the latter started selling more expensive Beep cards online despite supposed “supply chain” issues on top of the complaints of “overpriced” Beep cards at the height of the pandemic in 2020.

“They said the supply is not enough, [but] how come they are able to sell it in their stores on online shopping platforms for a much higher price?” Digital Pinoys national campaigner Ronald Gustilo said in a statement.

But Clet echoed an official statement of AFPI saying the sale of Beep cards outside of train stations was not within the concession agreement signed in 2016 and only cards sold in train stations are covered by government subsidies.

Clet also said the DOTr and railway operators are willing to accept proposals from other fare card issuers, as long as they meet the requirements for the government’s automated fare collection system.

But that was not enough for Sen. Grace Poe, chair of the Senate committee on public services, who demanded that the DOTr explain its failure to correct the problem, even with the allotted funds as subsidies to the public transport sector.

“We have allocated billions for the development and modernization of our railways system. Our people must feel the fruits of their hard-earned taxes,” she said, adding that the current situation was a step back from the aims of the government.

In a statement, Poe lamented how the shortage has added to the struggles of commuters who now have to spend longer time for Beep cards.

“The time spent lining up for every single-journey ticket is a moment wasted for our already weary commuters,” she said.