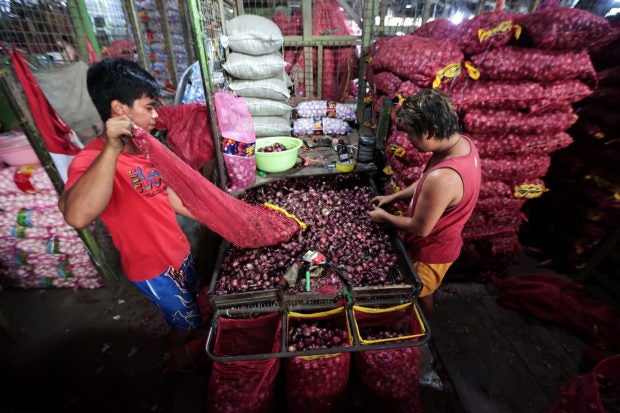 MANILA, Philippines — The retail price of red onion in Metro Manila has surged to P300 a kilo as of Monday from P180 a year ago, but the Department of Agriculture (DA) would not say whether there is a supply shortfall.

Agriculture Assistant Secretary Kristine Evangelista said the price of red onion ranged from P280 to P300 a kilo based on its price survey around the capital region.

“Based on our monitoring of the markets, we have observed a spike in the price of red onion,” Evangelista said at the Laging Handa public briefing, adding that the DA was coordinating with the Bureau of Plant Industry (BPI) to determine the reason behind the surge.

Evangelista said farmers were expected to begin harvesting their produce between the second week and last week of December and this could ease the upward pressure on prices.

“Now, we are looking at the volume to be harvested because this will help boost local supply,” Evangelista said.

In the case of white onions, Evangelista said they were linking local producers directly to institutional buyers to be able to sell their produce.

“We are expecting a harvest of white onions from our farmers,” she said, adding that fast food chains and other big buyers were already in talks with cooperatives on supply deals.

In the meantime, Evangelista said the DA was opening more Kadiwa stores where consumers could buy onions for only P170 a kilo.

The Kadiwa ng Pasko was launched on Nov. 16 simultaneously across the country and featured food items and products made by micro-, small- and medium-sized enterprises.

Through the project, consumers can also buy rice at P25 a kilo. Evangelista said several Kadiwa stores were available in Davao, Tacloban and other areas in the provinces.

Meanwhile, the Fisheries and Aquaculture Board of the Philippines (FAB) is urging the government to allow the entry of imported seafood in wet markets.

“We appeal to Your Excellency to maintain the status quo and continue to allow access of imported seafood to wet markets, supermarkets and online markets until the new (directive) shall have been finalized,” FAB chair Chingling Tanco and director Jess Cham said in a letter to President Marcos, who also sits as agriculture secretary.

The group was referring to ongoing efforts to consolidate Fisheries Administrative Order (FAO) Nos. 195 and 259, which would address concerns about market access, as well as availability and affordability.

FAB’s appeal was in reaction to the recent pronouncement of the Bureau of Fisheries and Aquatic Resources (BFAR) that it was illegal to sell salmon, salmon head and belly, and imported pompano in the wet markets.

It cited BFAR’s 2020 legal opinion stressing that all market places, including supermarkets and online markets, are considered wet markets.

The BFAR opinion “is causing turmoil not only in the wet markets but also in supermarkets. The economic impact and disruption will be severe across the supply chain—from importers to wholesalers to retailers to fish vendors and ultimately to hospitality/food service and consumers,” it warned.

The Philippines, according to FAB, has a supply deficit of 1.5 million metric tons (MT) of seafood annually. Round scad (galunggong) accounts for 400,000 MT of the total.

“The effort of BFAR in informing wet market operators that imported pink salmon and pompano should not be sold in wet markets is a welcome development—both for the food safety of our consuming public and the economic security of our fisherfolk,” said Tugon Kabuhayan convener Asis Perez, a former BFAR director.