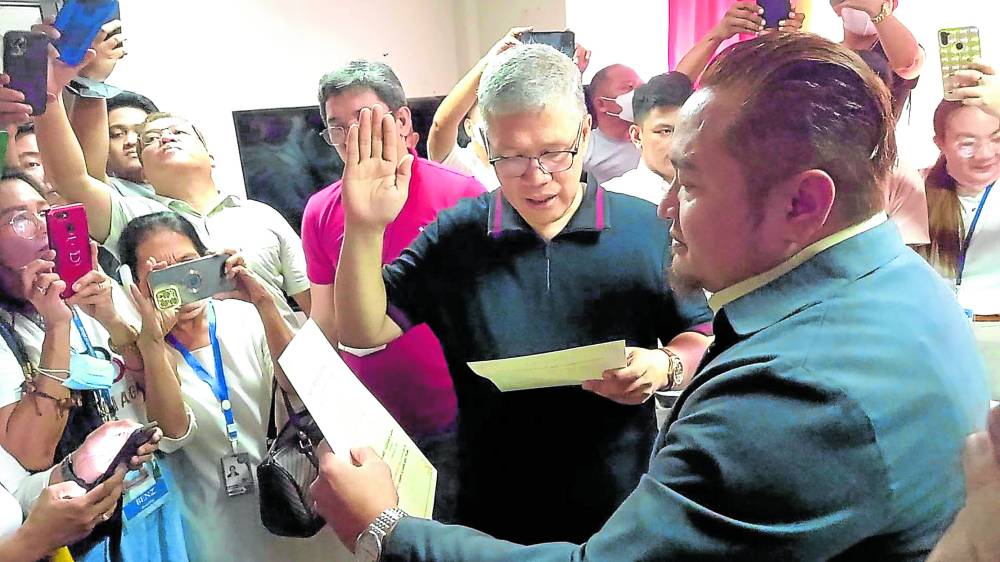 TRANSITION Albay Vice Gov. Edcel “Grex” Lagman takes his oath of office as governor before lawyer Ian Macasinag, dean of the College of Law of Bicol College, on Thursday. He replaced Gov. Noel Rosal who was disqualified by the Commission on Elections for alleged vote-buying. —MICHAEL B. JAUCIAN

LEGAZPI CITY—Albay Vice Gov. Edcel “Grex” Lagman on Thursday assumed office as governor of the province after the Commission on Elections (Comelec) affirmed a resolution of its First Division that disqualified Gov. Noel Rosal from running for the province’s highest post.

Lagman took his oath before lawyer Ian Macasinag, dean of the College of Law of Bicol College, during a ceremony at the Albay Public Safety Emergency Management Office here.

“It is indeed providential that I have succeeded [Rosal] by operation of law to the governorship of Albay after the Comelec en banc disqualified [him] with finality … in a case of which I was not a party,” Lagman said in a statement.

On Tuesday, the Comelec upheld its First Division’s resolution that disqualified Rosal from running as Albay governor in May.

At a press briefing in Manila, Comelec spokesperson John Rex Laudiangco said the Comelec issued a writ of execution that was served to all respondents on the same day.

The Comelec directed the Department of the Interior and Local Government (DILG) to immediately implement the disqualification order, as it also asked Rosal to “cease and desist from his powers and functions” as governor, vacate the post and relinquish it to Lagman.

Also through the rule of succession, the highest-ranking member of the provincial board will replace Lagman as vice governor.

Prior to Lagman’s assumption as governor, a writ of execution was served by the DILG regional office in Bicol, but no one from the provincial capitol received it, prompting the DILG representatives to post the order inside the premises.

Lagman said he would reach out to Rosal’s supporters. “We need healing after four months of [instability]. There had been serious politicking here [in Albay],” he said.

Lagman also said that he would reinstate all capitol employees that were previously put on “floating status” due to the leadership issue.

The Inquirer tried to reach Rosal for comments on Thursday but he was not immediately available.

Despite the Comelec ruling, Rosal may still file a petition within 30 days from notice of the decision through the Supreme Court, Laudiangco said.

Rosal and his wife, Legazpi City Mayor Carmen Geraldine Rosal, were accused of vote-buying when they allegedly violated a provision of the Omnibus Election Code against the release of public funds during the election period for the May polls.

The Comelec ruling stemmed from a petition filed in April by defeated Legazpi City council candidate Joseph Armogila, who sought Rosal’s disqualification for reportedly approving, in his capacity as then mayor of Legazpi, the cash assistance for tricycle drivers and seniors.

In his petition, Armogila said the distribution of the payout happened during the 45-day campaign spending ban between March and April.

The Comelec’s First Division granted Armogila’s petition to disqualify Rosal from running as governor, saying the former Legazpi mayor committed an election offense by violating the ban on public spending.

On Nov. 27, Rosal told the Inquirer that he was hoping that the Supreme Court would issue a temporary restraining order (TRO) in his favor against the finality of the poll body’s disqualification order against him.

But the status of the request for a TRO, which he filed on Nov. 21, was not immediately known, although the Comelec’s “certificate of finality” mentioned that no TRO was issued by the High Court within five days from receipt of the parties to the resolution that would have prevented the poll body’s en banc resolution from being final and executory.