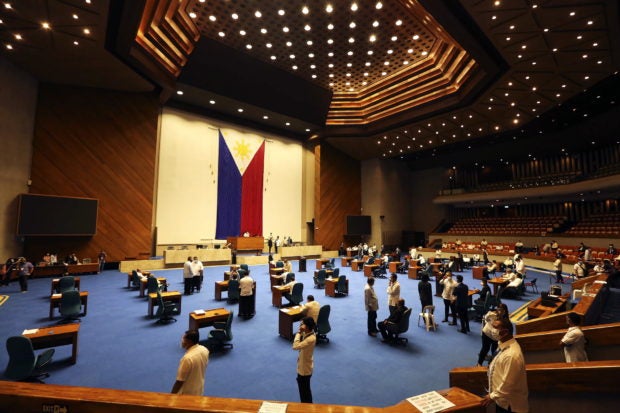 SOCIAL DISTANCING Members of the House of Representatives practice social distancing during the COVID-19 pandemic. Others join plenary sessions via Zoom. FILE PHOTO

MANILA, Philippines — Substitute bills of several priority measures have been approved by the House of Representatives Committee on appropriations to ensure that the proposals would move despite the bicameral conference committee hearings on the 2023 national budget.

Among the substitute and consolidated bills which needed approval from the appropriations committee are the following:

House Bill (HB) No. 2 was one of the first bills filed by then-incoming House Speaker Ferdinand Martin Romualdez as he and other lawmakers sought to renew the push for a more sturdy medical workforce, especially during times of emergency.

Romualdez noted in his bill that the Philippines’ doctor-population ratio is below the recommended 10 doctors per 10,000 individuals — or short of around 200,000 health workers.  This is crucial, the authors said, as the COVID-19 pandemic exposed the need for more health workers in the country, especially after doctors and nurses were exposed to the disease.

Currently, the House panel is busy with the bicameral conference committee, which discusses disagreeing provisions in the House and Senate versions of the proposed P5.268 trillion national budget.

After approving these bills within their respective committees, the proposals would then be forwarded to the plenary for second reading, where amendments and debates would be held.  If a majority of the House members vote in favor of the bills, it will reach the third reading, where another vote will take place before the bill is approved.