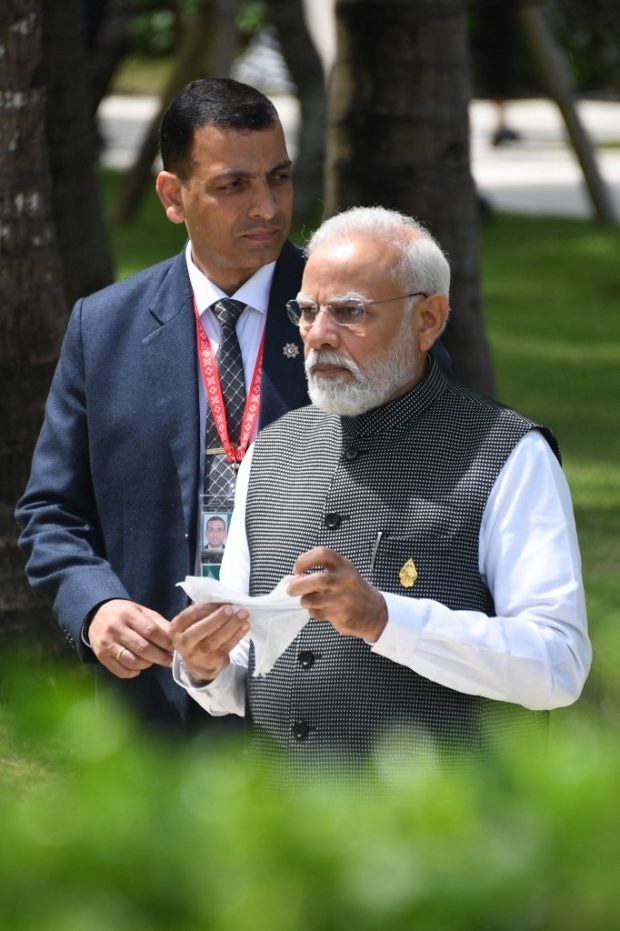 India’s Prime Minister Narendra Modi walks to the lunch meeting during the G20 summit in Nusa Dua on the Indonesian resort island of Bali on November 15, 2022. (Photo by SONNY TUMBELAKA / POOL / AFP)

New Delhi and Moscow have ties dating back to the Cold War, and Russia remains by far India’s biggest arms supplier.

India has shied away from explicit condemnations of Russia over the war despite its economy being stung by the soaring oil and commodities prices that followed.

Modi has pressed Russian President Vladimir Putin to end the conflict, including at a face-to-face meeting on the sidelines of a major regional summit in September.

He reiterated that call in an article outlining India’s ambitions for the G20 forum — of which Russia is a member — released by the government and published by the Telegraph newspaper in Britain.

“Today, we do not need to fight for our survival – our era need not be one of war. Indeed, it must not be one!” Modi wrote.

The invasion of Ukraine, a country known as the “breadbasket of Europe”, has periodically disrupted grain shipments and raised the spectre of a global food crisis.

Modi said India would “seek to depoliticize the global supply of food, fertilizers and medical products, so that geo-political tensions do not lead to humanitarian crises”.

“As in our own families, those whose needs are the greatest must always be our first concern.”

New Delhi has long walked a tightrope in its relations with the West and Moscow — and the Russian invasion of Ukraine has highlighted the difficulty of that balancing act.

It has repeatedly brushed off calls from Washington to condemn Moscow, despite pursuing greater security ties with the United States.

The Asian giant of 1.4 billion people is also a major consumer of Russian oil, ramping up discounted purchases in the wake of a Western embargo.