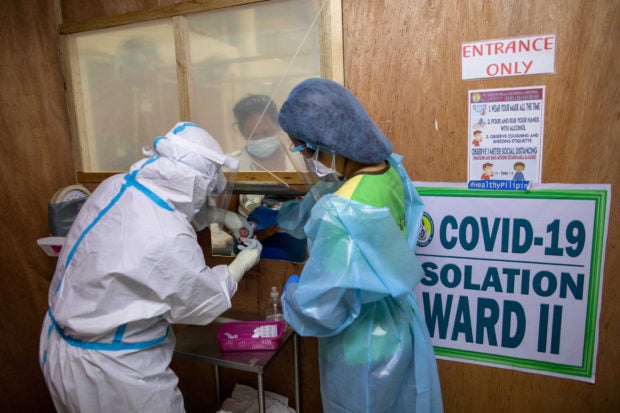 FILE PHOTO: Health workers get a blood sample from a newborn baby through a makeshift window on the COVID-19 isolation area of the government-run Dr. Jose Fabella Memorial Hospital, amid the coronavirus disease outbreak, in Manila, Philippines, September 18, 2020. REUTERS/Eloisa Lopez

MANILA, Philippines — A bill aiming to create a medical reserve corps to ensure the country’s preparedness to handle health emergencies like the COVID-19 pandemic has been refiled at the lower chamber.

Leyte 1st District Rep. Ferdinand Martin Romualdez and Tingog Party-list Reps. Yedda Marie Romualdez and Jude Acidre filed House Bill No. 2 to institutionalize a medical reserve corps (MRC), which they said is necessary especially since the World Health Organization said that the Philippines only has six doctors per 10,000 Filipinos.

The doctor-population ratio is below the recommended 10 doctors per 10,000 individuals, thus, the country is short of around 200,000 health workers.

The proposed measure is anticipated to be tackled in the incoming 19th Congress.

“The COVID-19 pandemic has exposed the inability of the country’s health care system to cope with the surge of patients needing medical care due to lack of medically-trained personnel,” reads the Explanatory Note of House Bill No. 2, which was filed on June 30 but copies of the proposal was released to members of the media on Monday.

“Compared to other Southeast Asian countries, Singapore has 23 doctors per 100,000. Vietnam, Thailand, and impoverished Timor Leste each have eight doctors per 100,000 people. In developed countries such as Italy and the United States, the doctor-population ratio is 40 and 26 per 10,000 population, respectively,” it also states.

If enacted, the measure would institute a hierarchy where the reserve corps are headed by licensed medical physicians who are no longer practicing in the hospital; followed by medical students who have completed first four years of their studies; and licensed allied health professionals.

The MRC would be under the supervision of the Department of Health (DOH), and may be activated to do contact tracing and monitor suspected cases during outbreaks, to aid private and public health professionals.

“This bill likewise proposes the establishment of mobilization centers in every province, where medical reservists can register for duty.”

According to the bill, the MRC may also be deployed by the sitting President to compliment state forces’ medical personnel during wartime, a state of lawless violence, or during a state of calamity.

And as a safeguard, the bill noted that medical reservists who do not respond to the deployment without justifiable reasons would be required to reimburse the government for all expenses related to his or her recruitment, training, and compensation.

A similar bill was filed in the 18th Congress – House Bill No. 8999 or the Medical Reserve Corps Act – which the House of Representatives passed on third reading.

But the proposed measure was not enacted into law.

Read Next
4 Chinese nationals nabbed as P256-M tobacco products, gear seized in Cavite
EDITORS' PICK
Percy Lapid’s kin: ‘We demand that his cowardly assassins be brought to justice’
Nothing’s certain so here’s how everyday Filipinos can make the most out of their Plan B
Do all the things you do, faster
PNP vows to bring justice for slain Percy Lapid; says probe underway
House energy committee chair Arroyo bats for cheap electricity
‘Seniority’ requirement despite vacant posts in DOH bothers senators
MOST READ
Student stabs teacher dead in Samar town
Trixie Angeles quits as press secretary due to health reasons
Not rehired?: Trixie Angeles not on list of reappointed Cabinet execs
Final net satisfaction rating slightly decreases for Robredo, Sotto — SWS
Don't miss out on the latest news and information.