Laya as CCP head: Culture can flourish in the ‘kanto’ | Inquirer News

Laya as CCP head: Culture can flourish in the ‘kanto’ 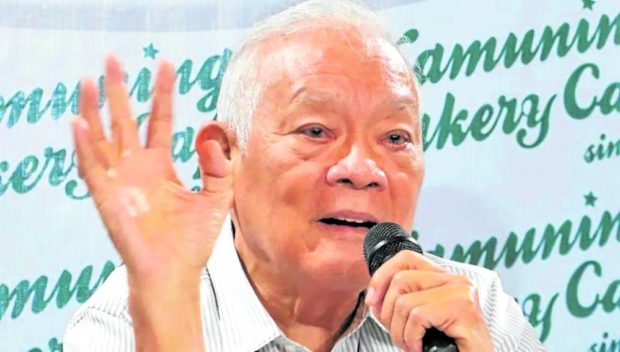 Jaime Laya, chair of the Cultural Center of the Philippines

MANILA, Philippines — Jaime Laya, the Central Bank governor during the Marcos dictatorship, is back under another Marcos as the chair of the Cultural Center of the Philippines (CCP) where he plans to promote culture and the arts through innovative ways that appeal to the youth.

Two of his visions are the “Kanto Canta” music competition and revitalizing the “balagtasan,” a Filipino form of debate done in verses that integrate rapping to adapt to modern times.

“The idea of Kanto Canta is that it needs to be their original composition and use indigenous musical instruments like the nose flute, guitar or bandurya,” he said on Wednesday during the Pandesal Forum at Kamuning Bakery in Quezon City.

Participants will submit a music or performance video shot in any “Pinoy kanto” or area and uploaded on YouTube.

Laya said the competition started last year with many participants; some winners even managed to secure commercial contracts.

To debunk impressions that it is only for the elite and older people, Laya said the CCP would motivate the youth through initiatives that use new technologies like anime and digitization.

The CCP also intends to provide a career progression for winners of the National Music Competitions for Young Artists Foundation created under Ferdinand Marcos Sr.’s Proclamation No. 1173, Thirteen Artists Awards (TAA) and students of the Philippine High School for the Arts (PHSA).

The TAA is a triennial conferment founded by the CCP in 1970 that recognizes outstanding contemporary visual artists.

“When you win in these competitions, people tend to forget you. At PHSA, we pick and support students with potential but after graduating, they are also forgotten,” Laya said.

He said the CCP will identify the most promising performers and artists and give them scholarships or support for advanced studies.

“We want to continue it so we would have renowned artists in the future like Lea Salonga and Cecile Licad,” Laya said.

The government-owned and -controlled cultural center was one of Marcos Sr.’s iconic legacies.

In a Senate hearing last September, CCP president Margarita Moran-Floirendo announced that it would temporarily close its doors for two to three years to make way for renovation and structural retrofitting.

Laya said that the renovation had nothing to do with the current Marcos administration, particularly former first lady Imelda Marcos, because the budget was approved under President Duterte’s term.

Laya, now 83 years old, was the first minister of budget and management, then became governor of the Central Bank of the Philippines from 1981 to 1984, before he was ousted by Marcos Sr. amid crucial debt negotiations with the International Monetary Fund and the Philippines’ commercial bank lenders.

But from 1984 to 1986, he was promoted to minister of education, culture and sports and headed the National Commission for Culture and the Arts and the Association of Certified Public Accountants in Public Practice.

During the forum, he shared that he was discovered by the late dictator’s chief economic planner Gerardo Sicat, who insisted on his appointment even if “President Marcos did not know me at all.”

When Sicat was able to compel Marcos Sr., he said, “Don’t you think I should meet him first before I appoint him?”

In Malacañang, he said Marcos Sr. called him “Jimmy” and “spent one hour persuading me to join the government.”

Laya said he was initially uninterested because he was already the dean of the University of the Philippines (UP) College of Business Administration and a partner in the accounting firm SGV.

“I was 33 years old. Imagine, he is the martial law dictator, talking to me, persuading me, so I got flattered,” he said.

“I told him I will join them for one year,” but right then and there, he was immediately sworn in.

Laya was one of the first Philippine officials to say publicly that the 1983 assassination of opposition leader Benigno Aquino Jr. had hurt the economy as investors pulled out of the country due to the heightened political unrest following the killing.

He expressed confidence in the leadership of President Ferdinand Marcos Jr. and his “excellent economic team (who) I’m sure know what they’re doing.”

He advised current leaders to make long-term plans and think about the welfare of the next generation of Filipinos 50 years from now, instead of just “short-term remedies.”

He is currently the chair and president of Philtrust Bank and treasurer of the Opera Guild of the Philippines.

Did you know: Cultural Center of the Philippines