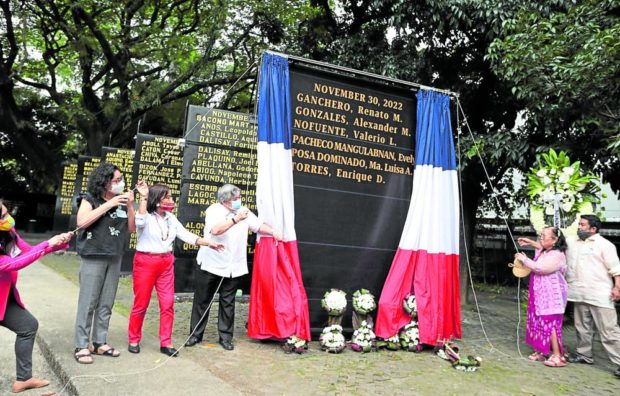 MORE OF THE FALLEN ARE RAISED | The names of six more martyrs and heroes in the fight against tyranny during the Marcos dictatorship that were added to the granite Wall of Remembrance at Bantayog ng mga Bayani in Quezon City were unveiled on Wednesday, Nov. 30, 2022, during ceremonies to mark the birthday of revolutionary leader Andres Bonifacio. (Photo by NIÑO JESUS ORBETA / Philippine Daily Inquirer)

At Bantayog ng mga Bayani, martyrs and heroes in the struggle against martial law and the Marcos dictatorship are honored and memorialized in the black granite Wall of Remembrance, where new names are added each year.

The names of the six more — students Renato M. Ganchero and Alexander M. Gonzales, and teachers Evelyn P. Mangulabnan, Valerio L. Nofuente, Maria Luisa Posa-Dominado and Enrique D. Torres — have been etched on The Wall. The two students and four teachers were honored during rites on Wednesday, Andres Bonifacio Day.

Also honored publicly though belatedly on Wednesday were a desaparecido priest, two human rights lawyers and another student whose names were among the first to be etched in Bantayog’s Wall of Remembrance in 1992.

Aguilar advocated for the poor, especially those who suffered at the hands of the powerful. He lived simply, always attended rallies, and gave legal aid to victims of human rights violations. He worked full-time with the Free Legal Assistance Group founded by the late Sen. Jose W. Diokno.

Although frequently invited to speak publicly even outside of Dipolog City, Aguilar was not known to have aspired for public office. Before martial law was declared in 1972, he was already editing a local paper in Dipolog City called Nandau (Subanon for today’s news).

After the 1983 assassination of Sen. Ninoy Aquino, Aguilar headed the Zamboanga del Norte Chapter of the Coalition for the Restoration of Democracy.

He told friends about death threats he had been receiving, but shrugged them off saying, “I am prepared to die.”

Unlike Aguilar, Amatong belonged to a prominent political family in Dipolog City. He was a well-known lawyer and was publisher and editor of the Mindanao Observer.

Amatong took up human rights cases and championed freedom of speech and of the press. Defying martial law restrictions, his newspaper published articles critical of the Marcos regime and military abuses. He exposed the military’s gambling protection racket, extortion, and fabricated reports used for blackmail.

Amatong and Aguilar were scheduled to leave on Sept. 24, 1984, for Tampilisan for a fact-finding mission and the exhumation of the bodies of two people from the town who were summarily executed.

On the night before their trip, two men came up to them as they were walking down a street and shot them at close range.

Two bullets that slammed into Aguilar’s chest and another that hit his nape killed him instantly. Amatong died eight hours later in the hospital.

In an outpouring of grief and sympathy, tens of thousands of supporters attended the funeral of the two human rights defenders.

Redemptorist priest Rosaleo “Rudy” B. Romano was an outspoken human rights defender based in Cebu City. Ordained in 1964, he served as a vocation director and studied theology in Ireland.

Upon his return, he helped organize the Ama-Sugbu, a militant workers’ alliance in Cebu, and was the spokesperson for the city-wide transport strikes in 1984 and 1985.

Romano was at the forefront of the antidictatorship movement in the Visayas and was executive secretary of the Coalition Against People’s Persecution and national vice president of Bagong Alyansang Makabayan.

On his last visit home, Romano’s father pleaded saying, “They will torture you, you will die early.”

Romano replied: “Don’t worry, Tatay, if I die, I have no family and you will know who killed me.” Those were the last words the father heard from his son.

On July 11, 1985, Romano was on his motorcycle when he was stopped by armed men in Tisa, Labangon, a city suburb. Local residents said the men seemed to have been waiting for him for hours. They seized the priest and he was never heard from again.

There were indications that the military was involved in his disappearance. Romano was 44 when he was abducted.

Immanuel M. Obispo was a scholar and biology major at De La Salle University in Manila. Although he had a slight build and a limp because of polio, he engaged in many extracurricular activities.

He joined the League of Filipino Students, participated in protest rallies, and criticized the Marcos regime in articles he wrote for student publications.

On Oct. 17, 1984, Obispo failed to return home. His family found him dead in a hospital where, they learned, he was brought, still alive, after he was said to have been hit by a train. Still, questions about his death remained. Why were there cigarette burns on his chest? Who was the fake priest who called his teacher and gave false information? Obispo was 20 when he died.

Never Again, Never Forget The six new honorees bring to 326 the names engraved on The Wall which stands several meters away from the 45-foot bronze monument created by the late renowned sculptor Eduardo Castrillo. The monument depicts a defiant mother holding on to her fallen son.

The monument, the commemorative wall, and other structures at Bantayog Memorial Center are dedicated to the nation’s modern-day martyrs and heroes who fought tyranny and martial rule (1972-1986), to restore freedom, justice, and democracy in the country.

Through its Never Again, Never Forget Project, Bantayog counters “attempts by certain groups to rewrite Philippine history and confuse the young generation” about the truths of the Marcos dictatorship and martial law.

6 fallen activists to be honored at Bantayog