An air of defiance hung over the Bantayog ng mga Bayani freedom park in Quezon City on Thursday morning as dozens of martial law survivors swore to resist the whitewashing of the horrors of Ferdinand Marcos’ dictatorship.

At the park 10 kilometers away from the National Museum where the dictator’s son and namesake Ferdinand Marcos Jr. was to take his oath as the 17th President of the Philippines at noon, the survivors—mostly in their 60s and older—literally passed the torch of memorializing the abuses of martial law to youth representatives of the party list group Akbayan and the Philippine Educational Theater Association (Peta).

The youth representatives accepted the challenge to “never allow that dark period to happen again.”

They were to have converged at Liwasang Bonifacio, the freedom park nearest to the National Museum, said Bayan secretary general Renato Reyes. But it was already occupied by Marcos supporters, with whom members of the Manila Police District (MPD) had a Zumba session in the morning.

“What matters to us is to hold a successful and peaceful program that will not lead to any untoward events,” Reyes told reporters.

Plaza Miranda is the “second nearest” freedom park to the National Museum, per the MPD. 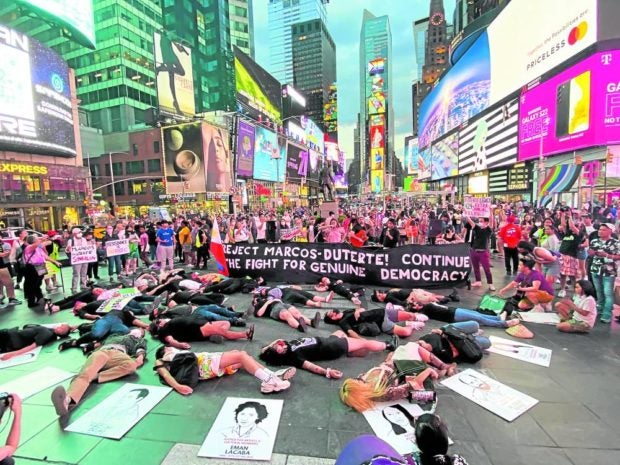 At the Bantayog park, Loretta Rosales, former lawmaker and former chair of the Commission on Human Rights (CHR), said their oathtaking was the kind that Filipinos should recognize—“one that promises to resist revisionism and to never forget history, to continue fighting for the truth.”

Lamented playwright-activist Bonifacio Ilagan: “The generation that fought against Marcos Sr. 50 years ago is slowly vanishing. Many have passed away, so there is a need for continuity.”

Ilagan, who was arrested and tortured during the Marcos dictatorship, said that currently, “there is no effort to institutionalize” the memory of martial law. “With Marcos as president and [Vice President] Sara Duterte as education secretary, it would be an even harder fight,” he said.

“But remember,” he added, “in the 1970s, the antidictatorship movement started to thrive even without institutional support… It is now up to the masses to take up the charge in the movement.”

The martial law survivors pledged to “continue offering their life in the fight against the distortion and lies manufactured … to favor Marcos Jr.’s candidacy” as president.

They called on the new President to acknowledge the rights violations of his father and the ill-gotten wealth of their family when they ruled the country from 1966 to 1986, before they were forced to leave Malacañang in a bloodless revolt.

The martial law survivors and the youth representatives exchanged vows before the Wall of Remembrance, on which the names of 320 martial law heroes are inscribed.

“With our martyred friends and colleagues as witnesses, we pledge to never stop surfacing the truth about the abuses and excesses of the Marcos dictatorship, and most of all, to thwart any further attempts to distort history,” they said. 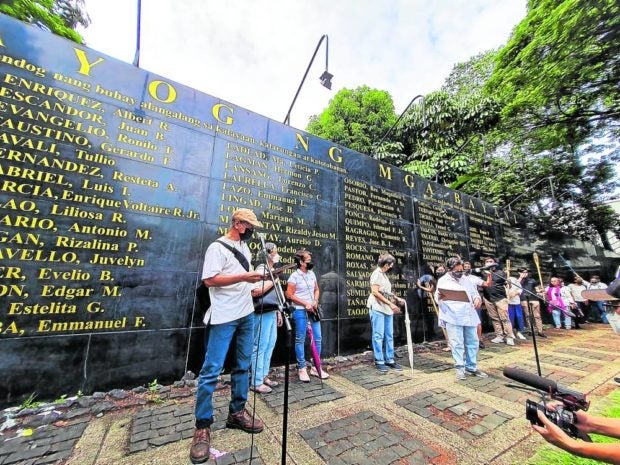 OLD WOUNDS, NEW PLEDGE Survivors of martial law atrocities committed in the 1970s and early 80s under the Marcos regime take an oath to “guard against tyranny, falsehoods, and the trampling of people’s rights and livelihood,” in a program held on Thursday at the Bantayog ng mga Bayani in Quezon City. —KRIXIA SUBINGSUBING

May Rodriguez, also a martial law survivor, said it was a symbolic act that the gathering was held at the Bantayog park as another Marcos was inaugurated as President.

The park is one of the few spaces in the country dedicated to memorializing the abuses of the dictatorship and honoring the thousands who were killed, arrested and forcibly disappeared.

“It has always been an important location because it represents a time in our nation’s history where people stood up to a government that was not legally constituted,” said Rodriguez, the executive director of the foundation overseeing the Bantayog park. “Elsewhere you might be exposed and unsure, but here we hope there is some level of protection.”

The fight against the whitewashing of martial law abuses also starts at Bantayog, which houses a museum and historical research center dedicated to the events of the period 1965-1986.

Rodriguez said it would take “great political cost to close down Bantayog, or to erase similar efforts.”

“The survivors of martial law survived precisely because they found ways and means to express themselves despite the worst kinds of repression,” she said. “I believe that while we face a future of anxiety, we will still be able to survive this government.”

Bayan’s Reyes said the move to Plaza Miranda was agreed upon by the protesters and the MPD during their “last-minute dialogue.” He said it was also “upon the request” of the police.

Despite the move, Reyes was satisfied with the venue they were allowed. “Plaza Miranda was a historic [place] during the Marcos dictatorship, and that is why this is a good place to be, to remember during those dark times,” he said.

The MPD pegged the attendance at the Plaza Miranda rally at 1,000.

After the program, the protesters marched to Recto Avenue, where they dispersed.

Former Bayan Muna Rep. Satur Ocampo, a martial law survivor himself, joined the protest action which, he said, would not be their “last” even with another Marcos as President.

“We reject the proposition … to forget the past and just concentrate on the future without resolving the problems and sufferings of the people during the dictatorship,” Ocampo said. “You cannot just ask someone to move forward. He cannot escape accountability for what happened before.”

Three activists were arrested in Quezon City before the presidential inauguration.

The Akbayan Youth chair, Dr. Raymond John “RJ” Naguit, and Benjamin Alvero and Jane Labongray of the Sentro ng mga Nagkakaisa at Progresibong Manggagawa-Youth were taken by six policemen around 10:30 a.m. while they were hanging a protest banner on a footbridge near the CHR on Commonwealth Avenue.

Naguit was the second nominee of Akbayan party list group in the May elections. But it did not clinch a seat in the House of Representatives.

The labor coalition Nagkaisa condemned the arrest, saying in a statement: “This is unacceptable in a democratic society. We condemn this reprehensible act. It seems this new government is afraid of its own shadow on the eve of its first day of governance.”

According to Nagkaisa, the cops “forcefully” took the banner from the three activists and dragged them into police vehicles.

“Throughout the incident, the officers refused to explain why the arrest was being made and were very rough with the detained,” Nagkaisa said.

It said Labongray was “grabbed violently [by] the arm and nape despite complying with the officers involved.”

Akbayan said the three activists were detained at the Quezon City Police District headquarters in Camp Karingal and released around 3 p.m. No charges were filed.

The MPD said it had no report of arrests made in connection with the presidential inauguration. —With a report from Dexter Cabalza