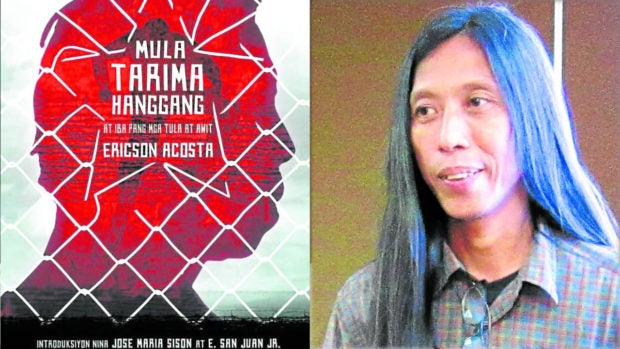 REVOLUTIONARY POET | Ericson Acosta, a consultant to the communist rebels in peace talks whose poetry collection (left) won the 35th National Book Awards for Best Book of Poetry in Filipino, was killed by Army soldiers in the outskirts of Kabankalan City, Negros Occidental, before dawn on Wednesday. (Photos courtesy of PABLO TARIMAN)

BACOLOD CITY, Negros Occidental, Philippines — As the country commemorated the birthday of Filipino revolutionary hero Andres Bonifacio on Wednesday, two alleged communist rebels were killed in what the military described as a gun battle at a hinterland village in Negros Occidental.

The National Democratic Front of the Philippines (NDFP) identified one of those killed as its consultant, Ericson Acosta, husband of the late New People’s Army (NPA) guerrilla and fellow poet Kerima Lorena Tariman, who was killed in Silay City in August last year.

Brig. Gen. Inocencio Pasaporte, commander of the Army’s 303rd Infantry Brigade, said the two men who were killed were still unidentified and that he could not confirm the NDFP’s claims.

He maintained, however, that the two died in an encounter with soldiers from the 94th and the 47th infantry battalions.

NDF-Negros spokesperson Bayani Obrero disputed the military’s account that Acosta and his companion, peasant organizer Joseph Jimenez, were killed in a clash.

He said in two separate statements that the military was “twisting truths” about the deaths of the two men. He said they were arrested “alive” at around 2 a.m. on Wednesday in Sitio Makilo, Barangay Camansi, in the outskirts of Kabankalan City.

He said that a few hours later, Acosta and Jimenez were tagged as casualties in a “fake encounter,” calling their killings “bloody murder.”

“The entire revolutionary forces and the broad masses in Negros offer the highest tribute to Ka Ericson Acosta. Likewise, NDF Negros extends sympathies to Ka Ericson’s family, especially his son, and all those he has inspired,” Obrero said.

“Today, the Filipino people have lost a revolutionary, propagandist, poet, songwriter, journalist, and thespian,” he said.

The rebel spokesperson said Acosta was in Kabankalan to check on farm workers in the southern part of the province and share developments on the Comprehensive Agreement on Social and Economic Reforms (Caser).

Caser was one of the agreements between the NDFP and the Philippine government being threshed out by the two sides before former President Rodrigo Duterte terminated the peace talks in 2017.

A Wednesday evening NDF-Negros statement said that according to the family of Jimenez, the bodies of Acosta and the peasant organizer showed “indications” that they were “stabbed and hacked.”

Before the two men were seized, the soldiers fired upon the house of the family of Ronald Francisco, where the two were resting.

The mother and sibling of Francisco said he, his wife Ronalyn, and their three children were taken to the headquarters of the 47th Infantry Battalion on Wednesday morning and could not be contacted, it said.

It added that the Kabankalan police station refused to file a blotter report when Francisco’s mother informed them about the incident.

Pasaporte told the Inquirer in a phone interview that there had been no proof that Acosta was an NDFP consultant. He said that the political arm of the Communist Party of the Philippines (CPP) identifies an “important or key NDF person” as one of its consultants when that person is killed or arrested.

“The Army recovered the bodies but they have yet to be identified. There was no arrest made,” Pasaporte said.

The Army reported finding the bodies after soldiers clashed with about 10 NPA rebels at Sitio Makilo at 2:10 a.m. on Wednesday.

It said that the villagers had complained that the rebels extorted food supplies from them every day, prompting them to report their presence to the Army battalions.

The two battalions conducted joint combat operations in the area and a gun battle ensued, lasting five minutes. The rebels withdrew southward and another clash occurred at 2:15 a.m. The guerrillas then scampered away, leaving the bodies of their comrades.

Acosta, 50, was conducting human rights research in Samar when he was arrested and detained in 2011. The charges of illegal possession of explosives against him were withdrawn by the Department of Justice due to numerous irregularities made by the authorities, starting from the time he was arrested. He was freed in 2013.

The poet, writer and cultural worker founded the Alay Sining group in the University of the Philippines (UP) Diliman.

He and his wife met on campus and both served as editor of the Philippine Collegian, the UP student newspaper. Their 19-year-old son, Emman, is a UP mathematics major.

Acosta was the winner of the 35th National Book Awards for Best Book of Poetry in Filipino for his work “Mula Tarima Hanggang at iba pang mga Tula at Awit” published by UP Press.

His father-in-law, Pablo Tariman, described Acosta as “the quiet type, obsessed with poetry and not patient with social injustice.”

“He was a good father and a good son,” Tariman said in an interview with the Inquirer.

“Ericson shared my daughter’s passion for poetry, but it is poetry in the service of the people. I grieve because my grandson has lost his parents. But I admire the principles they believe in. He was a true patriot up to the last hours of his life,” he said.

“That he joined my late daughter now is a consolation. That he died while the country is observing Andres Bonifacio Day is telling us something. Heroes are made to fight and not content with staying in the background,” Tariman said.

He said he had a “different view” from his daughter and son-in-law but respected their beliefs.

The statement from NDF-Negros about Acosta’s death “did not surprise me anymore,” he said.

“I knew that when they chose this life, this was what I should expect,” Tariman said.

“He was an artist in the service of the people, especially the poor peasants. He stood for his revolutionary principles and served the people to his very last breath,” Reyes said.