From kimchi stew to building a wall: Where did Yoon’s media relations go awry? | Inquirer News

From kimchi stew to building a wall: Where did Yoon’s media relations go awry? 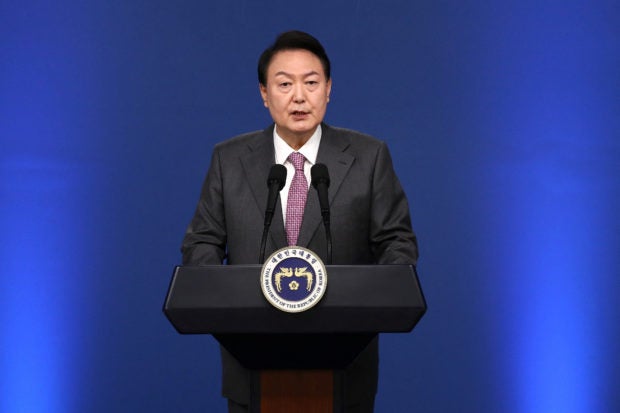 South Korea’s President Yoon Suk-yeol delivers a speech as he holds his first official news conference, after taking office in May, to mark 100 days in office, in Seoul, South Korea, on August 17, 2022. Chung Sung-Jun/Pool via REUTERS/File Photo

SEOUL — A few days after taking office, President Yoon Suk-yeol made a surprise visit to the press room and casually reminded reporters of his promise to treat them to kimchi stew as a gesture of his desire to communicate with the media.

Soon after, Yoon became the first president to hold morning interviews in the lobby of the presidential office, taking questions on contentious matters.

At a press conference on the 100th day of his inauguration in August, Yoon said “I think the process of carrying out the presidency should be transparently exposed and sharp criticism and various comments from the public should be accepted.”

“So I came to Yongsan, and in the past, it was in a separate building called Chunchugwan (formerly the Cheong Wa Dae press room), but I made sure that the press room was on the first floor where I and the staff work together,” Yoon said.

Seven months later, the daily meeting with reporters has been suspended and a wall was erected to separate the press corps from the main entrance that he walks in. And now, talk of relocating the press room from the building is calling into question Yoon’s promise of keeping the media close to aid communication with the public.

The presidential office announced they “have not reviewed in detail or decided on” the relocation of the press room. But a senior official said on condition of anonymity that it was true that they “reviewed” it, but nothing was confirmed due to the opposition from the public affair team.

Some political commentators noted Tuesday that the prosecutor-turned-president appears to have failed in handling the media and that he should have been more professional in facing criticism, as other seasoned politicians have learned to do.

Yoon won the presidency in March only six months after entering into politics, an unprecedented case in Korean political history.

“The purpose (of holding daily interviews with the press) was good,” political commentator Park Chang-hwan said. “But, it was not easy for a novice politician (like Yoon) to handle all that. (To keep his promise) he needs to be a ‘veteran’ in politics who can ‘accept’ criticism,” he said.

Observers pointed out that Yoon frequently reacted emotionally to reporters’ questions and made extemporaneous remarks that made headlines all day. For his part, Yoon also tried to change the atmosphere by presenting more polished and prepared remarks, but it didn’t last long, they added.

Kang Youn-gon, a professor at the School of Media and Communication at Chung-Ang University, said that Yoon should have learned that relations with the media covering politics should be different from those covering the prosecution.

Reporters covering prosecution usually write articles by collecting information leaked from the prosecution, which “controls information,” and it is also possible for the prosecution to “use the press in a more favorable way” for their investigation, the professor said. “However, this is not the case with political journalists.”

The president has an obligation to “listen to even criticism” and they are obliged to “communicate with the best of their ability” despite unfriendly reports, the professor said.

The conflict between Yoon and the media began as the president was embroiled in controversy when caught making vulgar remarks to an aide during his trip to New York in September, which MBC later relayed.

Later, MBC reporters were excluded from the presidential plane on his recent trip to Southeast Asia. The two sides have had multiple disputes, including an altercation during one of Yoon’s morning briefings.

Last week, Reporters Without Borders called on President Yoon to reverse his decision to bar journalists with public broadcaster MBC from the presidential plane and also called for the reinstatement of the president’s daily meetings with the press.

“Even the highest elected representative should not decide which media can report on them or which questions are suitable to be asked,” said the RSF East Asia Bureau Head Cedric Alviani in an email response to The Korea Herald.