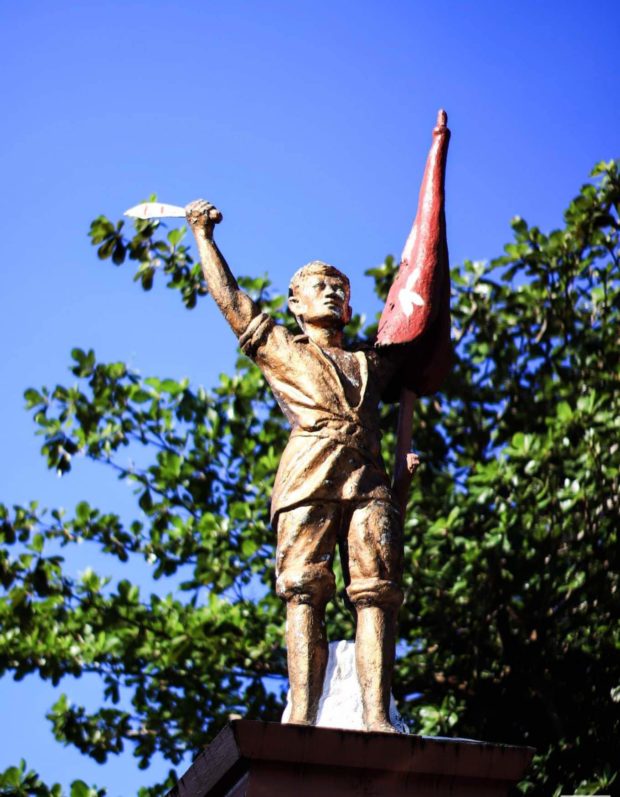 ONLY ONE IN BICOL. The statue of Andres Bonifacio in Sto. Domingo, Albay is kept clean and gleaming owing to its importance as the only statue of the hero in the entire Bicol region. During the 159th birth anniversary of the hero on Wednesday, Nov. 30, local officials placed flowers around the statue to commemorate the event. Contributed photo from Sto. Domingo municipal government

LIGAO CITY — Employees of the Sto. Domingo local government in Albay province, along with personnel from the Philippine National Police and Bureau of Fire Protection, commemorated the 159th birth anniversary of national hero Andres Bonifacio.

In a simple and brief program on Wednesday morning, Nov. 30, the officials offered flowers to his monument at Pugad Lawin Park in front of the town hall.

“It is more than an honor to recognize Bonifacio on his day because of the courage and love he showed that led to the country’s democracy,” Mike Bansale, acting administrator of Sto. Domingo, said.

Bensale said even when it is not a special day for Bonifacio, Mayor Joseling Aguas Jr. had ordered to keep the statue clean always, owing to its importance.

The Bonifacio statue in Sto. Domingo is the only statue of the hero in the entire Bicol region. It was built in 1925 and deemed older than the monument in Caloocan, which was built in 1933.