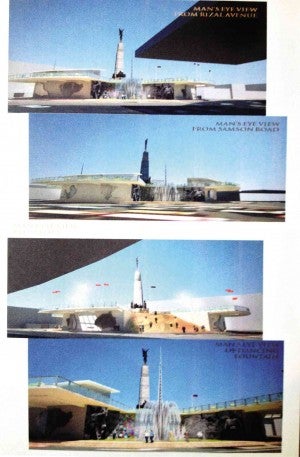 REVIVING AN ICON
The Guillermo Tolentino masterpiece has been ‘’lost’’ amid towering buildings and billboards, according to Caloocan City officials. That’s why plans are being drawn up to make it more visible, accessible and enjoyable. inquirer file photo

Soon, a trip to see the “Supremo” in Caloocan City may involve taking not just a history lesson but a leisurely stroll.

Children may run freely and safely on a circular track, past murals depicting how the quest for Philippine independence took shape. Families can enjoy landscaped gardens and waterfalls, steps away from a cultural performance.

But still, at the center of it all would be the monument to Andres Bonifacio, leader of the Katipunan secret society that waged the revolution against Spain, and whose 150th birth anniversary is being marked on Nov. 30.

This was the vision unveiled by Caloocan Rep. Edgar Erice, who on Friday presided over a meeting on how to reinvent the Bonifacio Monument, which today “seems lost amid the commercial establishments, the traffic jams and the towering billboards around it.”

The iconic landmark forms the center of a rotunda that connects Edsa, Rizal Avenue, Samson Road and MacArthur Highway.

Architect Dennis Villaneuva, who made initial plans for the project, clarified that the actual sculpture depicting Bonifacio and the Katipuneros—created by National Artist Guillermo Tolentino and unveiled in 1933—would never be touched.

“However, we will raise the entire monument, including the base with the image of the sun with eight rays, by about seven meters from ground level. This is to make sure that it will be very visible from wherever you’re coming from,” Villanueva said.

The raised monument would then be surrounded by gardens, an amphitheater and a stage where programs could be held.

It would be accessible through four underpasses, with entrances near the four roads leading to the rotunda. Shops may be built along the length of the underpasses, as well as an underground museum, tentatively named Museo ni Bonifacio.

The ground-level section may feature murals or sculptures depicting the eight provinces that rose up against Spanish colonial rule.

“In coming up with this plan we considered the aesthetics, as the monument is very much lost in the traffic and the buildings surrounding it. We also considered safety, so pedestrians can go there without disrupting traffic. Finally, we want to bring back its relevance as a historical landmark, a focal point unrivaled by any billboard there,” Villanueva said.

Erice stressed that the project was still in its infancy and could cost around P400 million.

“We have a very cooperative government in place. We support this and we will devote part of our funds once the plans become final,” said Mayor Oscar Malapitan.

Over the years, Caloocan City officials have tried to come up with plans relating to the monument. In 2003, for example, then Mayor Rey Malonzo considered relocating it to ease traffic congestion in the area.

Representatives of the National Historical Institute and the National Commission on Culture and the Arts, who were invited to the meeting, expressed neither approval nor disapproval of the plan but asked that it be further studied.