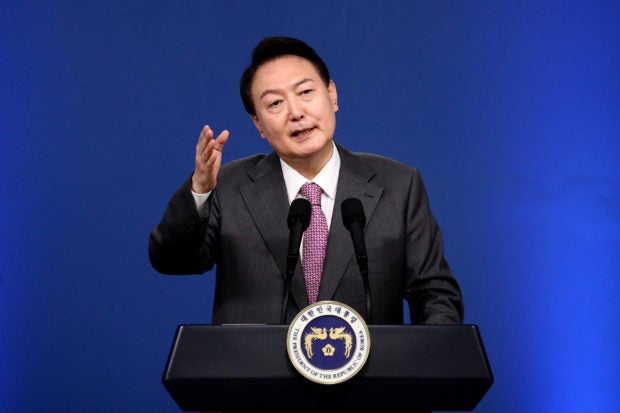 SEOUL — The presidential office said Monday that daily morning interviews with President Yoon Suk-yeol will be suspended indefinitely, a day after it erected a wooden wall that separates the press room from the main entrance of the building, amid an intensifying war of nerves with local news outlet MBC.

The interviews “cannot be continued” in regards to the recent “unsavory” situation, the office said, adding that fundamental measures are needed to prevent recurrences. The “unsavory” situation refers to arguments between an MBC reporter and the presidential official during an in-office interview Friday.

The decision was made six months after Yoon opened his daily briefings with press, as the first Korean president to do so, with an aim to improve communication with the public. Locating the press room within the presidential building was said to have been decided in a similar context.

The recent fuss kicked off when Yoon was asked about the exclusion of MBC reporters from the presidential plane on his recent trip to Southeast Asia. Yoon replied that the broadcaster showed “very malicious behavior to alienate the alliance, a key axis of our national security, with fake news that is different from the truth.”

The alliance refers to that with the US. Yoon was embroiled in controversy when he was caught by a hot mic making vulgar remarks, which was relayed by MBC back in September during his trip to New York.

When an MBC reporter hit back, asking Yoon what MBC did maliciously, the president left without giving an answer. Afterward, a war of words continued for about two minutes between Lee Ki-jung, secretary for public relations planning, and the MBC reporter.

Media experts expressed concerns about the presidential office’s arbitrary halting of the regular morning interviews, urging the office for a resumption.

Such moves can be interpreted as a “too emotional response” regardless of the authenticity of the MBC reports, said Shin Yool, a political science professor at Myongji University. “Even if the other side gets emotional, the ruling power needs to maintain rationality.”

“The in-office interviews are Yoon’s trademark to communicate with reporters and show transparency in government operations. The office should resume them,” Shin said.

It is worrisome that Yoon has a strained relationship with the media as it could disrupt state affairs, said Choi Jin, head of the Institute for Presidential Leadership in Seoul. “Communication with the public is the basis of all state affairs.”

Kang Youn-gon, a professor at the School of Media and Communication at Chung-Ang University, said Yoon should be more active in dealing with the media when he faces challenges instead of showing that he “would keep (his) mouth shut if there are unfavorable reports.”

This move has quickly turned into a political battle.

The main opposition Democratic Party of Korea and minor opposition Justice Party denounced the presidential office’s response to sever communications with the media.

Rep. Park Yong-jin of the Democratic Party asked on Monday via Facebook, “Is it Yoon Suk-yeol’s media policy to bully critical media and limit reporters’ coverage and take care of close reporters separately?”

He referred to a recent trip to Bali, Indonesia, when Yoon called on two reporters — from CBS and Channel A separately — after finishing his schedule in Phnom Penh, Cambodia. About an hour after the private jet took off, the crew took the reporters to the front compartment where Yoon sat. Several reporters testified that they returned to their seats about an hour later. The two reporters have personal ties with the president.

Democratic Party spokesperson Ahn Ho-young said in his commentary that the decision to temporarily suspend the morning interviews was “a very authoritative idea and a small-minded decision,” and pointed out that “refusing uncomfortable questions is closed communication.”

The ruling People Power Party fired back, putting the blame on MBC.

“The temporary suspension of door-stepping was caused by MBC,” said Park Jung-ha, a senior spokesman for the People Power Party, adding. “MBC is a public broadcaster, but there is no apology for all the controversies so far.”

Rep. Kwon Sung-dong of the ruling party also said in a Facebook post, “MBC tried to alienate the alliance by manipulating subtitles for remarks during the presidential trip and sending distorted emails to the White House and the US State Department.”

In September, MBC’s US correspondent sent emails to the White House and State Department to ask for their position on Yoo’s remarks. The presidential office later blamed MBC, saying the US State Department responded to the effect that “our relationship with Korea was strong, but (MBC) did not report it.”