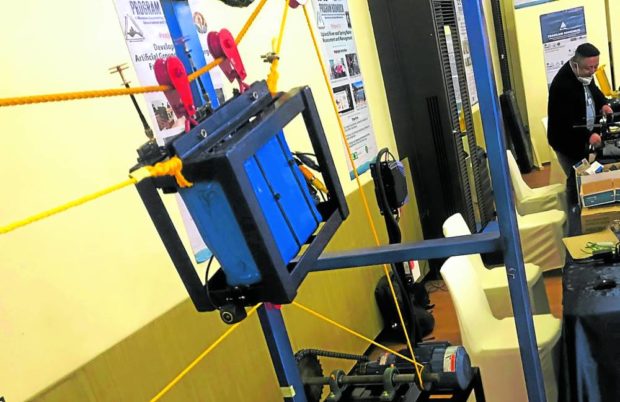 BAGUIO CITY, Benguet, Philippines — The farming town of Bauko in Mountain Province on Tuesday broke ground for an 800-meter cargo cable system that would efficiently deliver produce to the closest trading post and replace the need for more farm-to-market roads.

Bauko Mayor Randolf Awisan said his town was raising a counterpart fund of about P1 million to build the cargo system designed for micro, small and medium farm entrepreneurs that would run on electricity.

These projects are being undertaken by a collaboration of universities called “Project Boondock” to address problems that are unique to upland communities, such as landslides that frequently block vegetable transport routes and extreme rainfall that destroys mountainside farms.

The country receives as much as 4,064 millimeters of rain annually, but Baguio alone receives 3,500 to 3,800 mm of yearly precipitation, said Jacob Saytoc, a science research specialist from the Ecosystem Research and Development Bureau of the Department of Environment and Natural Resources.

Extreme weather and poor terrain periodically disrupt the salad vegetable industry of Benguet and sections of Mountain Province and Ifugao, which have a combined trade value of P14 billion as of October, according to the Department of Agriculture (DA).

As much as 80 percent of Metro Manila’s daily supply of carrots, cabbage, lettuce, cauliflower, potatoes and green beans are sourced from Benguet.

The cable car project, called the Cableways for Agricultural Resource Transport System (Carts), could be a climate change solution because it does not use fossil fuel, and would be a tool for economic recovery given the impact of unstable world fuel prices on the vegetable supply chain, according to project leader Janice Kay Aquino, a Saint Louis University (SLU) civil engineering professor.

According to Aquino, one of the first engineers to acquire a master’s degree in mountain engineering from SLU, food security is a key driver of the economy, given that 40 percent of the country’s land area is used to grow food, and employs one out of three Filipinos.

However, most of the Cordillera’s terrain has slopes higher than 30 percent, and the transit of agricultural produce and farm input remains a challenge even though 96 percent of the region’s main roads have been paved with concrete, she said.

Since the 1960s, winch and pulley systems have been employed by farmers to haul crops, Aquino said.

Conventional pulley systems are driven by diesel-powered engines, but some farmers are more creative and have “repurposed the engines and motor parts of trucks that no longer work,” she said.

This ingenuity was a drawback for at least one community in Benguet’s Tublay town, “which waits for an individual, who knows how to drive, in order to operate their cable car device,” Aquino said at the summit.

The makeshift cable car requires an ignition key, and could be launched forward by shifting to first gear.

Each Carts carriage could carry up to 500 kilograms of crops when it crosses steep mountains and rivers by cables controlled by electric motors, which can be activated by a remote keypad or through a smartphone app, Aquino said.

The system is augmented with a series of cameras to allow operators a “first-person view” of the cargo while in transit.

“Mayor Awisan and his predecessor (Abraham) Akilit also pushed the idea of improving Carts so it can also carry farmers in the future,” Aquino noted.

Carts, Aquino said, measures how much savings the farmers would earn from using cargo cable cars instead of roads.

According to the Official Gazette, the DA has invested P650 million this year for the improvement of Cordillera’s farm-to-market roads.

Project Boondock is also exploring measures to sustain the slope stability of the rice terraces in Mountain Province and Ifugao, and harness the Chico River, which courses through Mountain Province and Kalinga, while protecting riverside communities, said project leader Nathan Vincent Lubrica, an engineering professor at the University of the Cordilleras.

The project is also testing devices that would direct rainwater into aquifers to control flooding while storing rainwater for irrigation during dry spells, Lubrica said.

Cordillera families grapple with high prices as inflation climbs to 6.6%