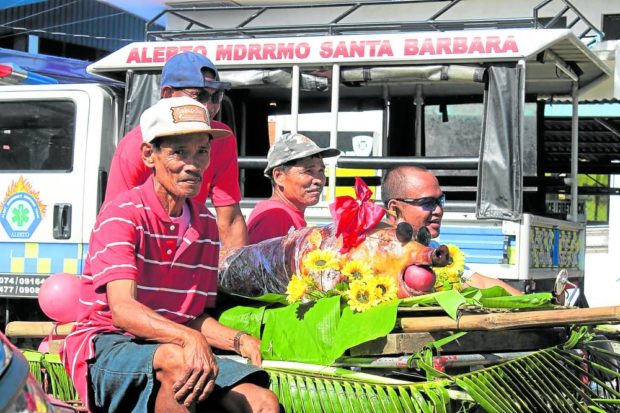 ILOILO CITY—The town of Santa Barbara is determined to become the “lechon capital” of Iloilo province despite its cases of African swine fever (ASF) and after drawing flak for holding the first festival to showcase its roasted pigs on Sunday.

Santa Barbara Mayor Dennis Superficial said he and the municipal government “are taking responsibility” for the event’s outcome, which was criticized after organizers prepared only a limited number of lechon that had been reserved by early buyers and left visitors craving for more.

“We miscalculated as to how many lechon we were supposed to prepare. Originally, we intended [to have] 120 lechon, and because we thought that it was too much, we halved it to 60. But we didn’t realize that this was not enough,” Superficial told the Inquirer.

“The lechon makers were anxious that we may not sell enough lechon, [so] they accepted reservations. But then, there were many reservations and there were also many who bought [during the festival] who weren’t able to get their share because of these reservations,” he added.

The festival was staged to help the town’s hog growers earn amid the threat of ASF.ASF, according to the World Organisation for Animal Health, is a highly contagious viral disease of domestic and wild pigs, whose mortality rate can reach 100 percent. The disease, however, is not a danger to human health, but has devastating effects on pig populations and the farming economy, it said.

Even with the backlash, Superficial said the local government would continue staging the festival, hoping to set up measures to spur the recovery of the local swine industry.

“We want to sustain the lechon supply here so we can be known as the lechon center of Iloilo. We haven’t fixed our plans yet but we want to open [our doors] to those who love lechon [by selling] every Sunday here at the plaza,” the mayor said.

The Iloilo Provincial Veterinary Office, as of Nov. 23, logged 1,628 ASF cases in the province, with 47 recorded in Santa Barbara.

Iloilo Gov. Arthur Defensor Jr. said a pork festival in the province will be beneficial in the prevention, containment, depopulation, and recovery against ASF.

On Nov. 24, Defensor issued Executive Order No. 545 which will implement the “Festival Kontra ASF,” which will feature activities to help backyard hog farmers.

Santa Barbara is the first town to launch the project. ASF cases were also reported in the towns of Oton, San Miguel, Alimodian, and Leganes.

Swine fever hits hog farms in another town in Iloilo