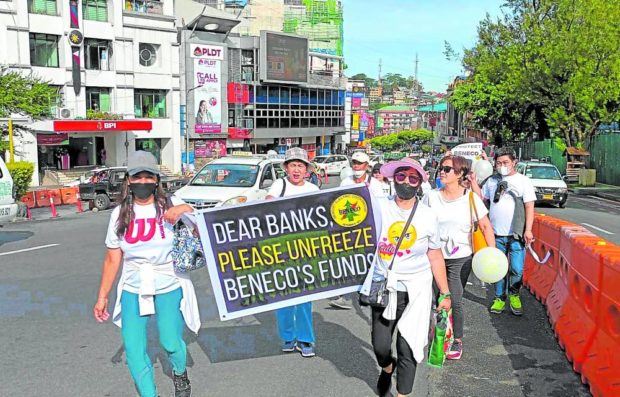 LEADERSHIP FEUD | Members and customers of Benguet Electric Cooperative (Benguet) stage a prayer rally in October to mark the first anniversary of the police takeover of the utility amid its leadership feud with the National Electrification Administration. Banks froze Beneco’s accounts but a local court last week directed the release of funds to pay the cooperative’s bills. —CONTRIBUTED PHOTO

BAGUIO CITY, Benguet, Philippines — A court here has directed a bank to pay some of the obligations of the city’s power utility, whose accounts have been frozen because of a leadership dispute with its regulator.

China Savings Bank Inc. was instructed to allow Benguet Electric Cooperative (Beneco) to withdraw P45.7 million from its account and settle its dues with the National Grid Corp. of the Philippines (NGCP).

The Nov. 24 decision issued by Judge Cecilia Corazon Dulay-Archog of the Baguio Regional Trial Court Branch 7 addressed a “motion for release of deposit” that was filed on the same day by Beneco amid its legal standoff with the National Electrification Administration (NEA).

Beneco officials and some of the cooperative’s members have sued the NEA for appointing a former Malacañang official as the utility’s new manager during the last months of the administration of former President Rodrigo Duterte.

They questioned the eligibility of lawyer and former Assistant Secretary Ana Maria Paz Rafael of the Presidential Communications Operations Office, as well as the procedural violations allegedly committed by the NEA board of administrators in replacing general manager Melchor Licoben, an engineer and a Beneco career employee.

But since August, the Baguio City Council has been leading negotiations between Beneco, Rafael’s camp and several banks in the city which froze P449 million of the utility’s accounts last year following Rafael’s designation.

Unable to access its operational funds, Beneco has failed to keep up with its monthly obligations to suppliers and other services, such as the electricity generated by Team Energy. The firm is a joint venture of Japan’s Tokyo Electric Power Co. and Marubeni Corp., which operates the 1,200-megawatt Sual Power Station in Pangasinan province.

Dulay-Archog was informed on Nov. 24 that Beneco had been billed P45.7 million for transmission arrears in October by the NGCP that had to be settled by Nov. 25.

The court then ordered China Savings Bank “to process and allow the withdrawal by Beneco in the amount of P45.7 million from its account with the plaintiff bank to be utilized for the payment of Beneco’s obligation to the NGCP.”

Dulay-Archog is hearing an interpleader filed by China Savings Bank, which asked the court to determine who has rights over the Beneco accounts.

Her decision was made following a Nov. 17 agreement between Beneco and the NEA-appointed group that the utility’s accounts would be used to settle Beneco’s debts pending a resolution by the Court of Appeals as to who manages Beneco.

In July, Dulay-Archog, in a separate case, also restrained the Bank of the Philippine Islands from disbursing Beneco funds to “unauthorized” individuals.

Beneco had sued several banks for “breach of contract” when they allegedly opened the utility’s deposits to people who were not members of the cooperative. Three of these banks are government-owned, and one of these allowed the withdrawal of about P50 million meant for Beneco’s rural electrification program.