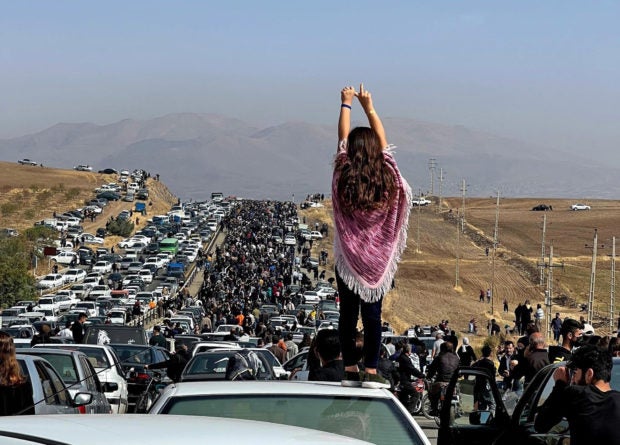 This UGC image posted on Twitter reportedly on October 26, 2022 shows an unveiled woman standing on top of a vehicle as thousands make their way towards Aichi cemetery in Saqez, Mahsa Amini’s home town in the western Iranian province of Kurdistan, to mark 40 days since her death, defying heightened security measures as part of a bloody crackdown on women-led protests.  (Photo by UGC / AFP)

TEHRAN — More than 300 people have been killed in Iran since protests erupted over the death in morality police custody of Mahsa Amini on September 16, a Revolutionary Guards general said Tuesday.

“Everyone in the country has been affected by the death of this lady. I don’t have the latest figures, but I think we have had perhaps more than 300 martyrs and people killed in this country, including children, since this incident,” Brigadier General Amirali Hajizadeh, head of the Guards’ aerospace division, said in a video published by the Mehr news agency.

The toll includes dozens of police, troops and militia killed in clashes with demonstrators or murdered.

The latest official toll is much closer to the figure of at least 416 “killed in the suppression of protests in Iran” published by Oslo-based group Iran Human Rights.

The group says its toll includes those killed in violence related to the Amini protests and in distinct unrest in the southeastern province of Sistan-Baluchistan.