In search for better emergency response, PH told there’s no such thing as natural disaster 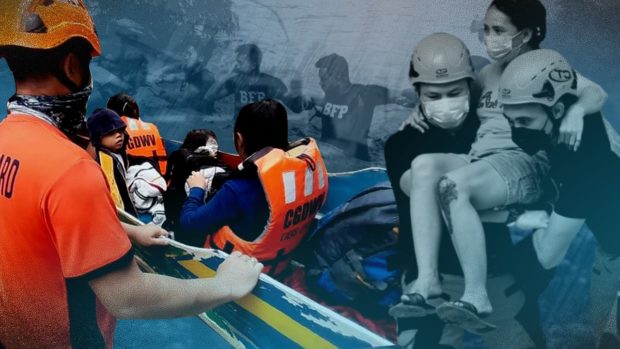 MANILA, Philippines—Following the damage and casualties caused by strong typhoons that battered the Philippines, President Ferdinand Marcos Jr. announced a plan to improve the country’s disaster risk and response system.

However, an expert believes there is much more to be done to truly make a difference in how the country manages and reduces risks of disasters and hazards.

Earlier this month, Marcos made public his plan to place the National Disaster Risk Reduction and Management Council (NDRRMC) under the supervision of the Office of the President (OP)—“a suggestion that has been going around for many years.”

“I think that overall, we can say that the response to the disasters—the disaster response has been a good one,” said Marcos.

“However, I believe that there are ways when we can even make it more streamlined,” he told reporters during a visit to Tacloban City for the ninth-year commemoration of Super Typhoon Yolanda (Haiyan), the strongest typhoon to make landfall in recent memory.

Marcos said the government is continuing efforts to refine the procedures, processes, and organization. He added that placing the NDRRMC under the Office of the President (OP) would make it a “more robust system.”

READ: Moving NDRRMC to Office of the President: What difference will it make?

The President, however, did not explain how he would handle the agency—which would be added to his responsibilities as President and secretary of agriculture—to make disaster response “more streamlined.”

According to political science professor Gerardo Eusebio, moving the NDRRMC under close management and accessibility to the OP “would make the fulfillment of its task with greater efficiency.”

When asked if the plan would make a difference in the country’s disaster response and risk reduction management, Timothy James Cipriano—a geographer and professor whose research focuses on hazards and disasters—said he believes otherwise.

“If you’re going to ask me whether it could make a difference, I don’t think it will. Maybe to a certain extent, it’s possible,” Cipriano told INQUIRER.net. 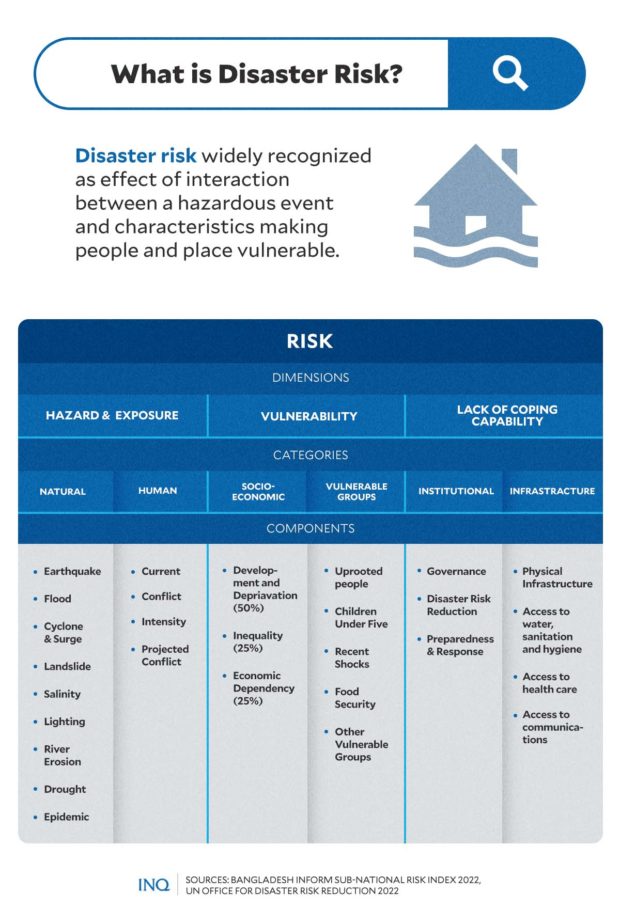 “I’m not sure how exactly [Marcos Jr.] will make [NDRRMC] more robust […] how exactly he will improve coordination in terms of disasters,” he added.

Cipriano stressed that although the country has made strides in disaster risk and preparedness since the creation of NDRRMC after Republic Act (RA) No. 10121 became law, there are still many things to be considered and issues to be addressed.

“There’s so much to be desired in terms of implementing on the dot what the law says,” Cipriano said, emphasizing that “there’s less emphasis on community efforts, although it is being recognized by the law that there is a need for community or grassroots efforts for us to reduce disaster risks.“

Several parts of the law also emphasized the role of NDRRMC in monitoring and providing necessary guidelines and procedures on Local Disaster Risk Reduction and Management (LDRRM).

Among the powers and functions of the agency, as stated in Section 6 of the law, include:

According to Cipriano, there is a need to strengthen the country’s local response system.

“We need to empower the local governments further [because] they are the first responders,” he said.

“[Since the] local government units are the first respondents, most of the resources must be allocated towards them. We’re not just talking about funding. Rather, we’re also talking about personnel,” he added.

He also stressed the need for better risk assessment at municipal and barangay levels—while taking into account climate change projections—which will then be integrated into the disaster risk reduction plans, land use plans, comprehensive development plans, and all the plans the national government requires of LGUs.

“I think that’s what we need more. We need to strengthen our local response system further.”

Another reason cited by Cipriano on why it is unclear whether the President’s plan to move NDRRMC under OP would make a difference is how disasters are currently being seen or framed.

“Like once a disaster ended, we [automatically] go back to our [day-to-day] lives. But in fact, there are what we call compounding hazards that also lead to complex disasters,” he continued. 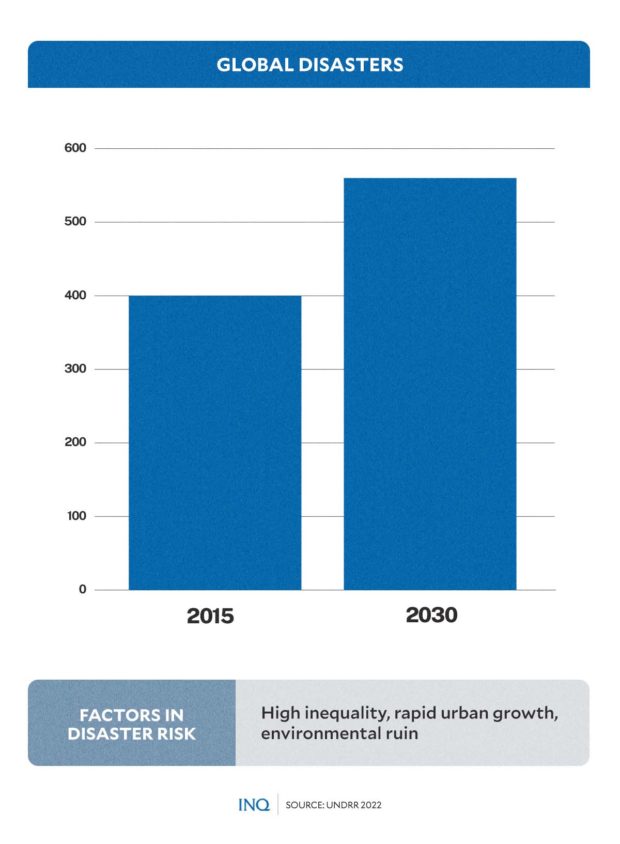 Disasters, as defined by RA 10121, are the result of the combination of exposure to a hazard, the conditions of vulnerability that are present, and insufficient capacity or measures to reduce or cope with the potential negative consequences.

The United Nations Office for Disaster Risk Reduction (UNDRR) emphasized that “there are no such things as natural disasters.” However, it believes that disasters often follow natural hazards.

The UNDRR considers disaster risk as the combination of the severity and frequency of a hazard, the number of people and assets that are exposed to the hazard, and their vulnerability to damage.

“Hazard, vulnerability, and exposure are influenced by a number of risk drivers, including poverty and inequality, badly planned and managed urban and regional development, climate change, and environmental degradation,” it added.

While Cipriano stresses the need to see hazards as interacting events, he believes that the country’s disaster risk reduction and management systems still need to be prepared to deal with those interacting events and complex disasters.

“We see disasters as a one-off event that happens, [and then] after that, we recover,” he said.

Aside from understanding how disasters are framed, Cipriano also noted that the country should invest more in long-term plans for disaster risk reduction management rather than just focusing too much on response alone.

According to the UNDRR, disaster risk reduction or dealing with disasters has been historically focused on emergency response.

However, as more people recognize disasters as something that is not natural, UNDRR noted that “ it is only by reducing and managing conditions of hazard, exposure, and vulnerability that we can prevent losses and alleviate the impacts of disasters.” 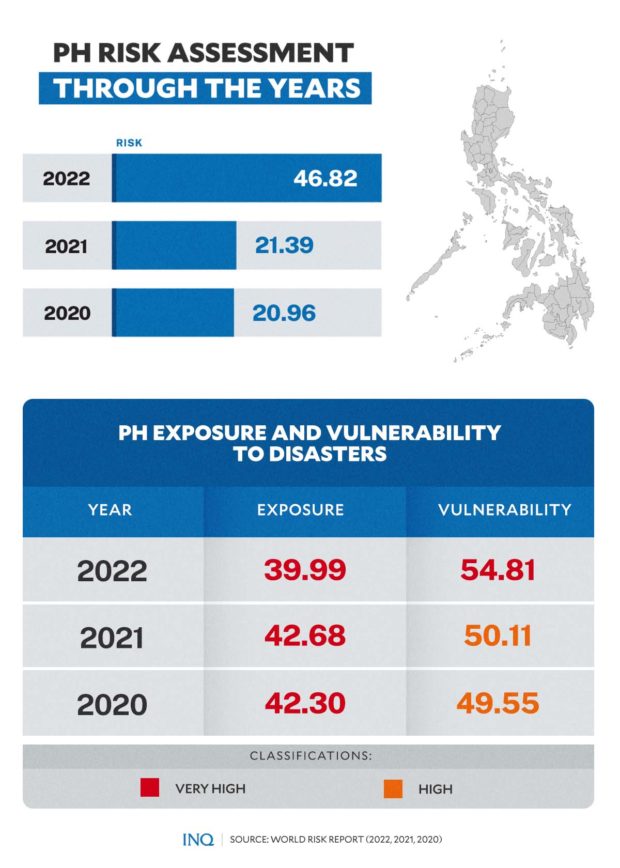 “Since we cannot reduce the severity of natural hazards, the main opportunity for reducing risk lies in reducing vulnerability and exposure,” the UN agency said.

“Reducing these two components of risk requires identifying and reducing the underlying drivers of risk, which are particularly related to poor economic and urban development choices and practice, degradation of the environment, poverty and inequality, and climate change, which create and exacerbate conditions of hazard, exposure, and vulnerability,” it added.

By addressing these underlying risk drivers, UNDRR believes disaster risks could be reduced. It could also help lessen the impacts of climate change and maintain the sustainability of development.

Based on the World Risk Report 2022 by Germany-based Bündnis Entwicklung Hilft and the Institute for International Law of Peace and Armed Conflict at Ruhr University Bochum (IFHV), the Philippines—out of 193 countries—had the highest disaster risk, with an index score of 46.82.

The current iteration of the WorldRiskIndex also noted that it had been updated, which now follows 100 indicators compared to the previous 27.

“In particular, the inclusion of indicators on how populations have been affected by disasters and conflicts in the past five years, as well as on refugees, displaced persons, and asylum seekers in the new index—also against the backdrop of the major global migration movements—results in a significantly more accurate representation of the realities of life in many countries,” said IFHV Research Associate Daniel Weller.

The WorldRiskIndex also considered that aside from the occurrence, intensity, and duration of extreme natural events, disaster risks are also shaped by social factors, political conditions, and economic structures.

“As long as we don’t invest in key development issues such as poverty [and] inequality,” Cipriano said, “we remain to be the riskiest country in the world.”

“If we don’t invest in development and if we don’t see development as part of disaster risk reduction efforts, then we always end up rebuilding after every single disaster,” he added.

“[W]e always end up rebuilding after every disaster, and this one hurts the most because even if we have good laws on DRR (disaster risk reduction), it’s just a matter of implementing,” he continued.