Moving NDRRMC to Office of the President: What difference will it make? | Inquirer News

Moving NDRRMC to Office of the President: What difference will it make? 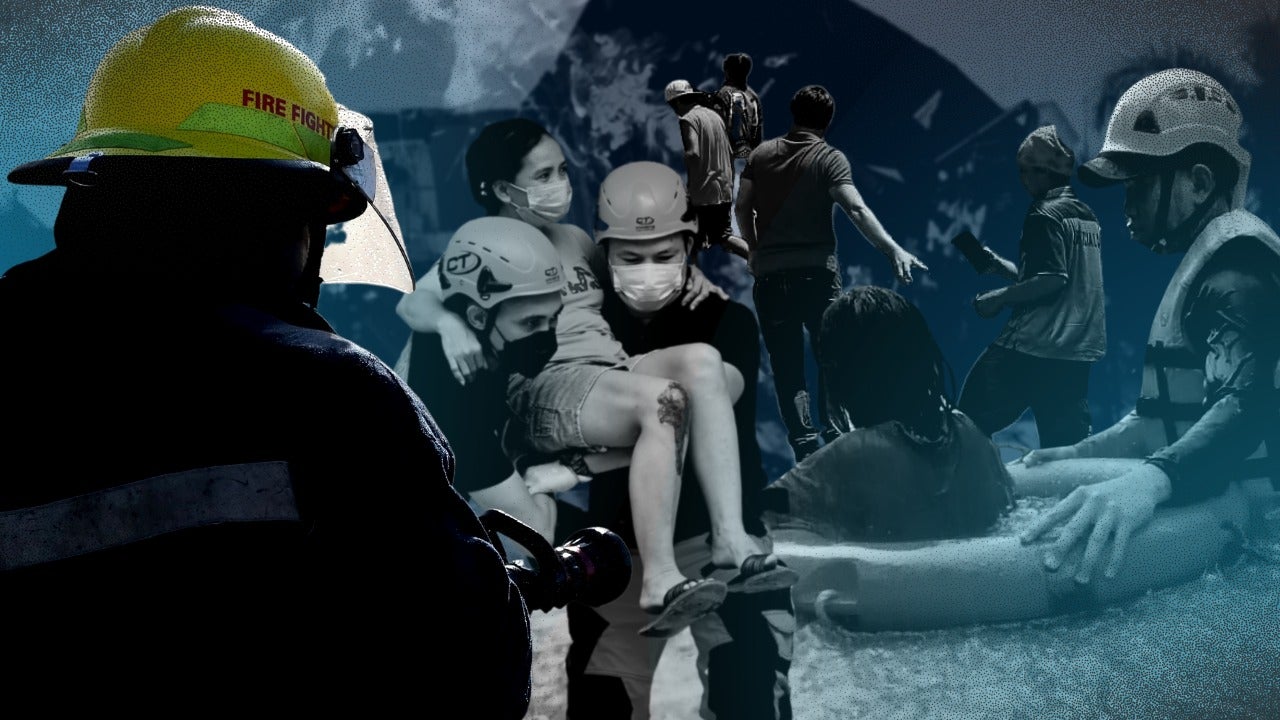 MANILA, Philippines—The damage and casualties caused by strong typhoons on the Philippines these past months have highlighted the need for improved disaster risk reduction and management.

Recently, President Ferdinand “Bongbong” Marcos Jr. presented an idea: Place the National Disaster Risk Reduction and Management Council (NDRRMC) under the supervision of his office. A plan, which he said, has been suggested “for many years now.”

“I think that overall, we can say that the response to the disasters—the disaster response has been a good one. However, I believe that there are ways when we can even make it more streamlined,” Marcos told reporters during a visit to Tacloban City for the ninth year commemoration of Super Typhoon Yolanda (Hayan), the strongest typhoon to make landfall in recent memory.

Marcos said the government is continuing efforts to refine the procedures, processes, and organization. He added that placing the NDRRMC under the Office of the President (OP) would make it a “more robust system.”

“There’s the NDRRMC, and they are the ones who are tasked to do this. But I think it would be equally, if not a more robust system if we put it under the Office of the President,” he said.

“So that’s what we are planning to do in the near future,” Marcos added.

READ: Marcos Jr. says NDRRMC to be under Office of the President in ‘near future’

When asked whether the president’s plan was constitutional, political science professor Gerardo Eusebio said he believed “it is within the constitutional mandate of the President as chief of the executive branch to absorb the direct supervision of the NDRRMC.”

“We all know how important the performance and functional efficiency of this agency be maintained and sustained at all times. The recent typhoon has caused damages in the billions of pesos,” Eusebio told INQUIRER.net. 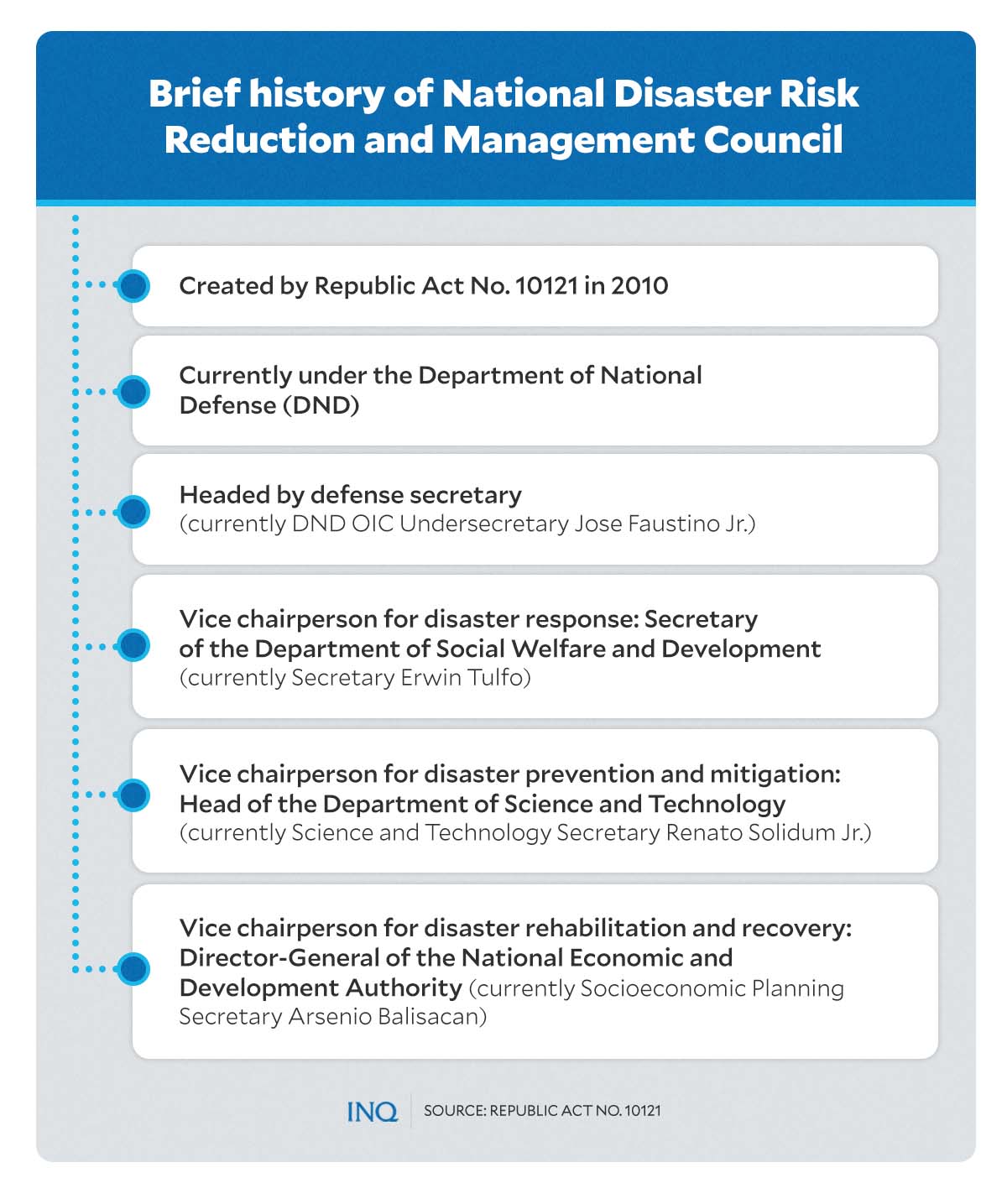 Paeng also brought over P6 billion worth of damage to agriculture and P1.5 billion in damage to livestock, poultry, and fisheries.

Echoing the president’s statement, Eusebio stressed that the plan does not necessarily mean that the country’s disaster risk and management agency underperformed—“but we note its importance albeit crucial role in governance.”

“As such, it could be deduced that under close management and accessibility to the Office of the President would make the fulfillment of its task with greater efficiency,” he added.

The NDRRMC, described by the Office of the Civil Defense (OCD) of the Department of National Defense (DND) as the “highest organized and authorized body for disaster Risk reduction and management (DRRM) in the Philippines,” was established in 2010 by Republic Act No. 10121.

According to RA 10121, or the “Philippine Disaster Risk Reduction and Management Act of 2010,” among the many functions and responsibilities of NDRRMC is to advise the president on the status of disaster preparedness, prevention, mitigation, response and rehabilitation operations being undertaken by the government, civil society organizations, private sector, and volunteers.

The NDRRMC is tasked with informing and recommending action to the President when it is needed to declare a state of calamity in areas extensively damaged. It is also expected to “submit proposals to restore normalcy in the affected areas”—including calamity fund allocation.

The agency is currently—and as stated by RA 10121—under DND and is chaired by the defense secretary. 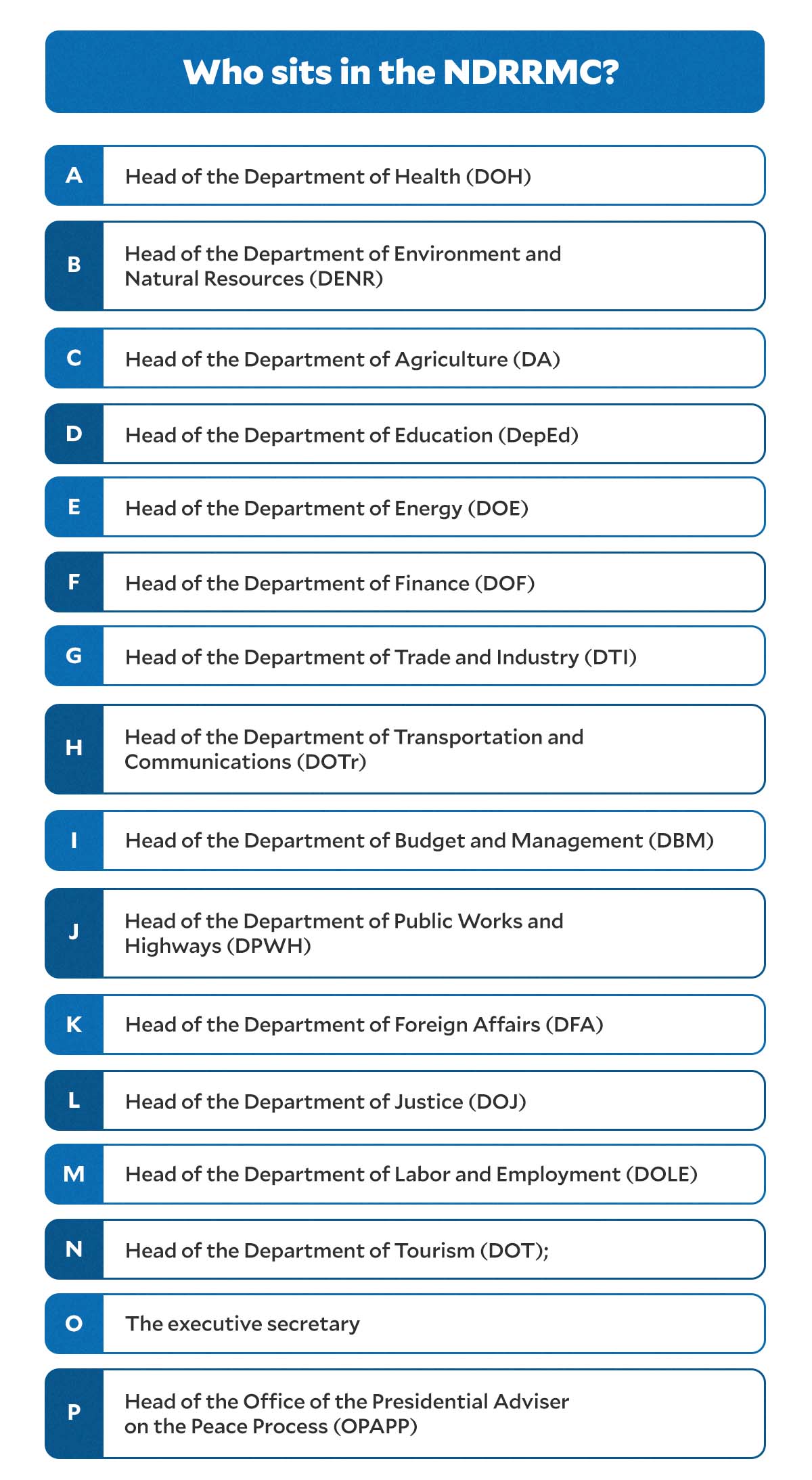 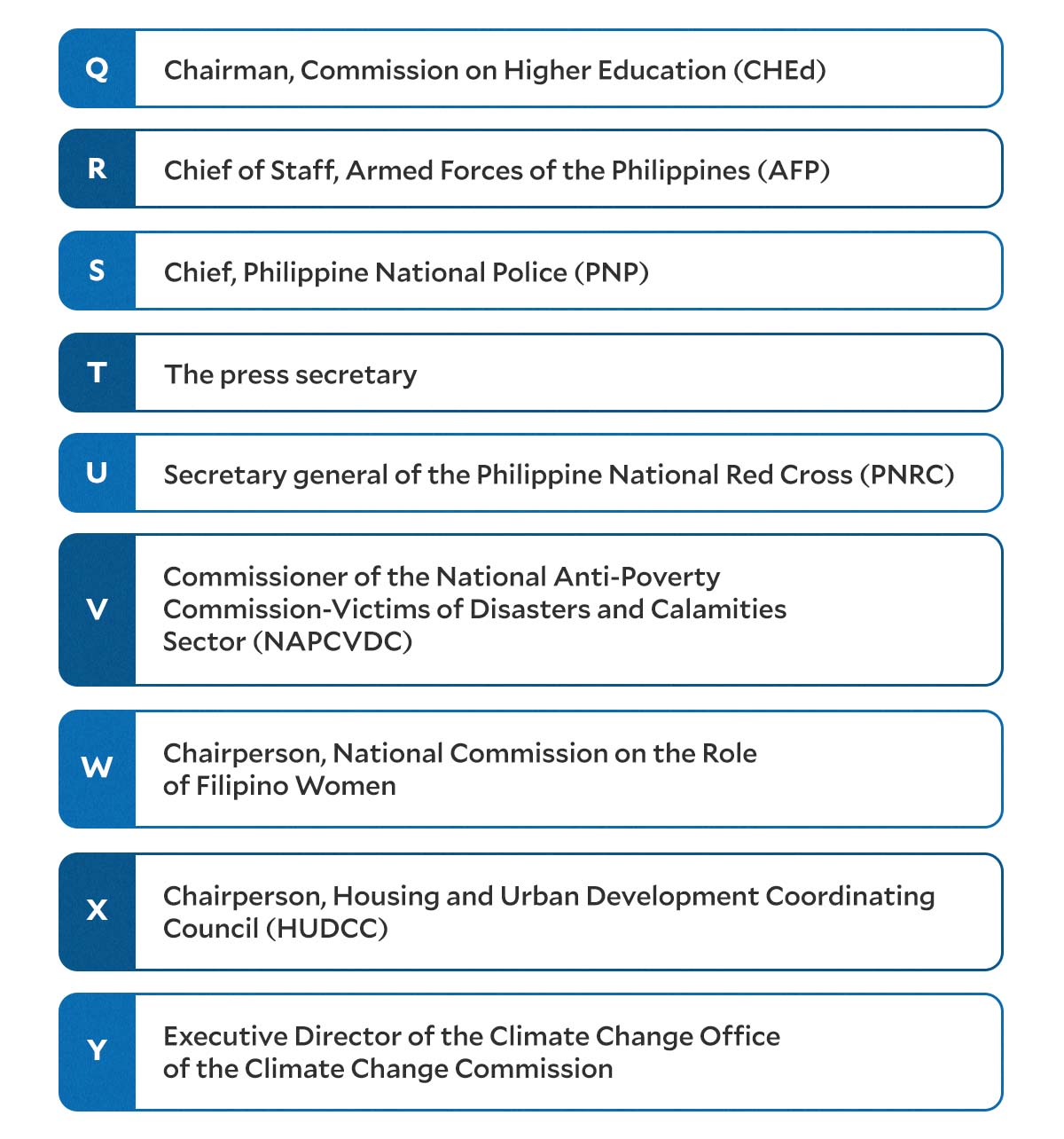 The law also contained a long list of the NDRRMC’s members, composed of the secretaries of the country’s various government departments and agencies.

Maria Ela Atienza, a political science professor at the University of the Philippines, said the functions of NDRRMC “involves the coordination of all crucial government agencies at both national and local levels as well as active involvement of civil society.”

“With the involvement of government departments and specifically the department secretaries who are alter egos of the president, it can be interpreted as already being under the Office of the President,” she told INQUIRER.net.

Sought for her opinion on Marcos Jr.’s plan, Atienza commented: “Perhaps, if they want to amend the law, they can explicitly add a provision that specifically states that the NDRRMC is under the OP.”

“The reason we need full-time department secretaries in modern national government bureaucracies is because we do not need a president to handle the specific day-to-day activities of very specialized agencies. The president has overall supervision and is accountable for the performance of all government agencies,” Atienza said.

“The NDRRMC, as [it] is currently organized, is composed of Cabinet secretaries representing their own departments as well as local governments and civil society groups. They have specific [or] specialized mandates in relation to DRRM. Of course, they are also viewed as representing the head of government, the President,” she added. 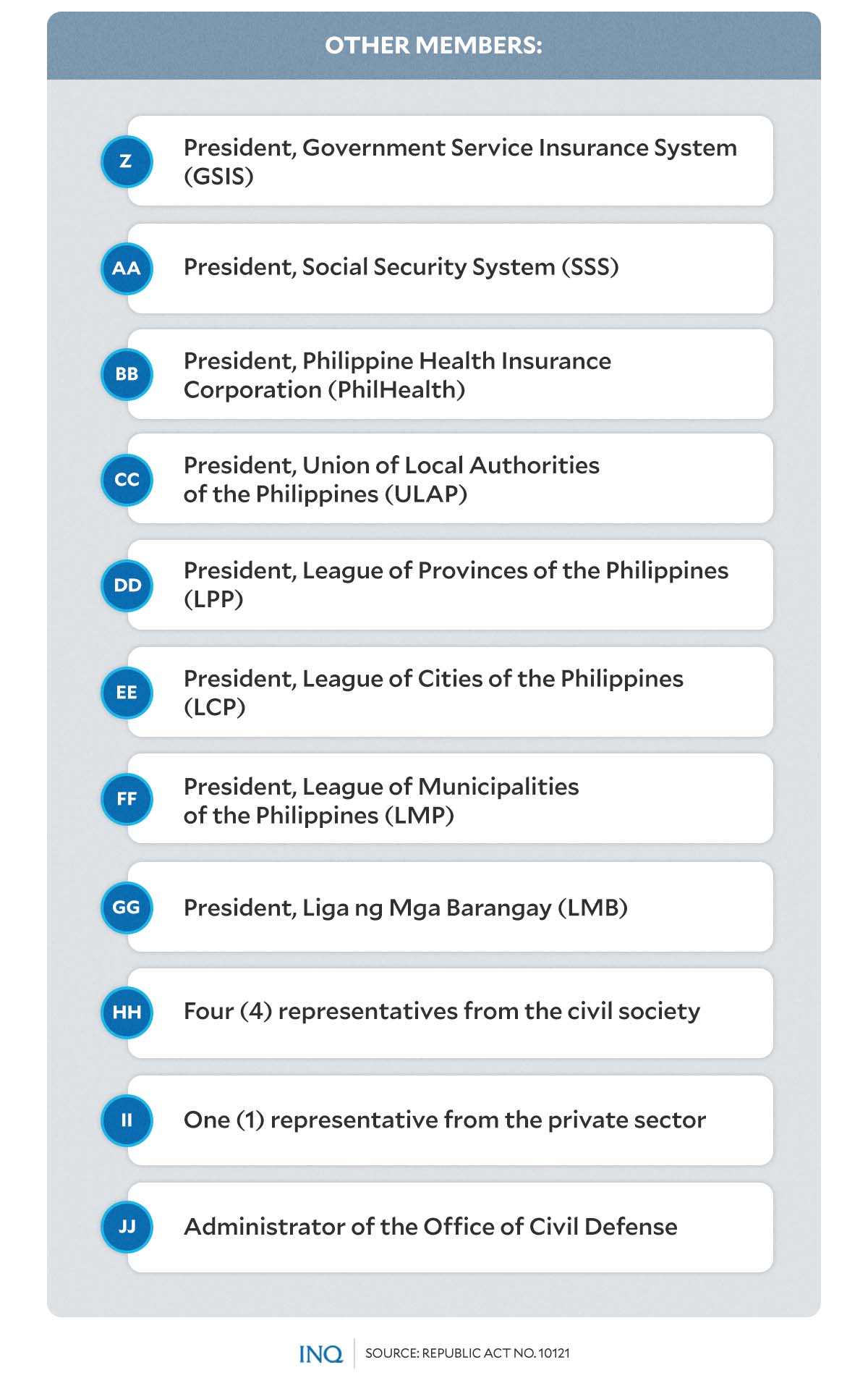 While the president is still expected to carry out his duty to lead the government and coordinate with the NDRRMC in improving the country’s disaster response, Atienza said Marcos should let experts lead their respective offices.

“While each president has their own pet programs and advocacies and sometimes temporarily perform specific secretary positions, it would be best for the president to allow qualified people with specialization needed by the respective offices to head these departments and agencies,” said Atienza.

“They are all accountable to him, after all. Their performance will also be a reflection of his leadership.”