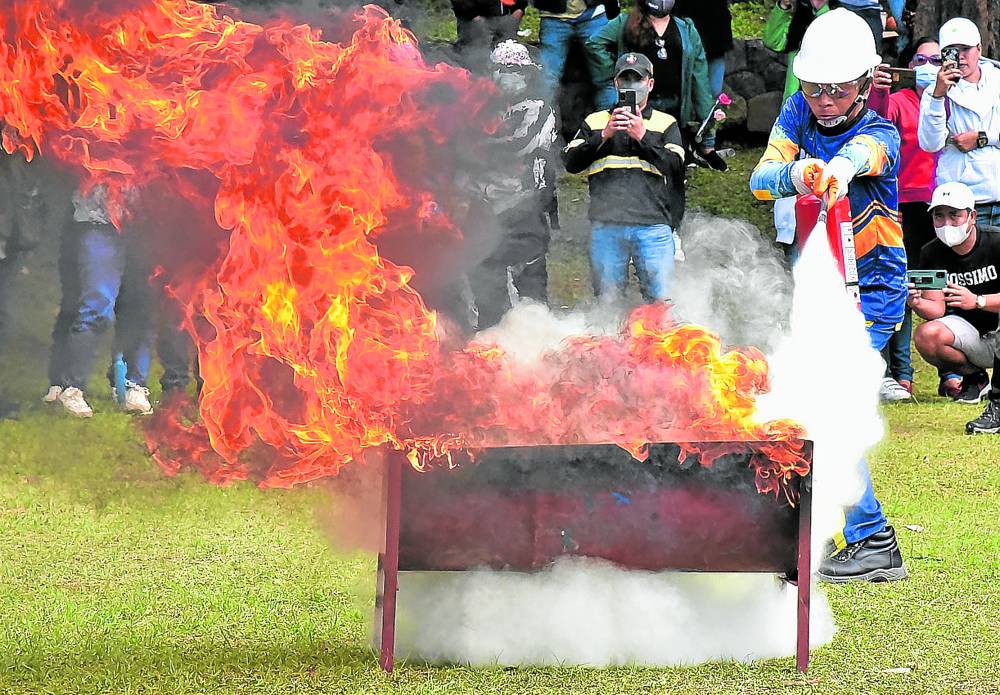 FIRE STOPPERS Mine workers from across the country displayed their skills at firefighting during a Nov. 18 skills competition, the culminating activity in this year’s Mine Safety and Environment Conference in Baguio City. —EV ESPIRITU

BAGUIO CITY—The Department of Environment and Natural Resources (DENR) should come up with better incentives and regulations to help pocket miners who have not been earning enough despite the risks of digging through small tunnels, a former government official said here.

The small-scale mining sector shoulders part of the blame for toxic mine waste that pollutes waterways because some unlicensed operations were in remote locations and could not be properly regulated, according to some industry accounts.

A number of mining operators have also used mercury to dissolve rock ore containing gold, based on studies.

Domingo said the People’s Small-Scale Mining Act of 1991 (Republic Act No. 7076), and several provincial ordinances were enacted to legitimize micro and small to medium enterprises in the mining industry.

RA 7076 created the “Minahang Bayan,” which are exclusive zones for licensed pocket miners, whether artisanal (hammer and mortar operators) or small-scale operations that use heavy equipment.

“But after 31 years [since the law was enacted], the government has declared only 49 Minahang Bayan areas over a period of more than two decades,” Domingo said during the Annual National Mine Safety and Environment Conference here last week. 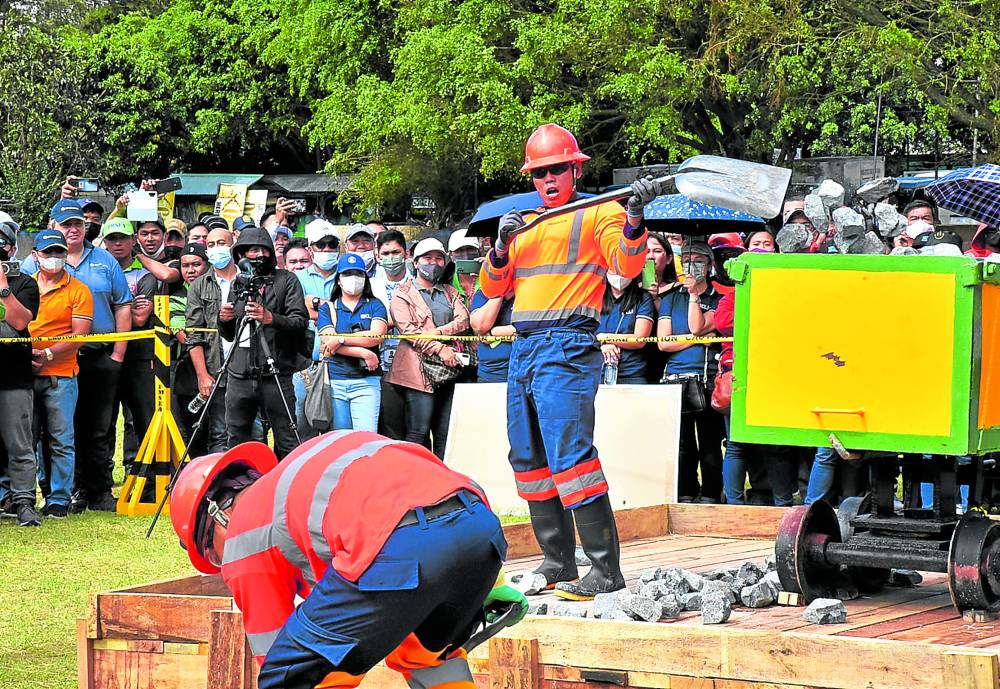 GOLD DIGGERS During this year’s mining conference in Baguio City, mine industry workers demonstrate the skills they need to work in the country’s mine tunnels in search of gold and other minerals. —EV ESPIRITU

Securing permits to operate in Minahang Bayan is also too complicated and expensive, he added.

Instead of simply waiting for applicants, MGB should explore and identify future Minahang Bayan sites, he said.

“We must be proactive. What happens now is that the government declares areas already occupied by miners as Minahang Bayan,” Domingo said.

He said DENR should put up custom mills to reduce or eliminate mine pollution from pocket mining.

The mills may also serve as a convergence point for small miners, who may trade their gold at buying stations to be put up by the Bangko Sentral ng Pilipinas there, Domingo said.

According to Domingo, the pocket miners’ financiers and the black market for gold take a huge portion of their revenues.

“So when a small-scale miner runs out of money, he looks for anyone willing to buy his ‘bahay,’ their term for gold, which is the size of the head of a matchstick, regardless of the price that is going to be offered,” Domingo said. “Where are the benefits we speak about for small-scale miners then?” Insurance system

The government should also build an insurance system for pocket miners, such as a Small-Scale Miners Protection Fund, he added.

According to the National Coalition of Small-Scale Miners of the Philippines, over 500,000 pocket miners make a living from small-scale mines all over the country.

Small-scale mines proliferated across the country in the late 1970s and early 1980s when world metals prices shot up to a high of $800 an ounce, and pocket miners learned to extract gold from rocks using the carbon in pulp technique (also referred to as gold cyanidation), Domingo said.

“They (indigenous peoples) have been panning gold in river systems since time immemorial until the beginning of commercial mining during American times,” he said at the symposium.

Benguet province is home to the country’s pioneer mines, beginning with the first corporate mine, Benguet Corp., which was established in 1904. Sangilo Mine was put up in 1924.