Harris isn't for women, all she cares about is US military expansion – Brosas | Inquirer News

Harris isn’t for women, all she cares about is US military expansion – Brosas 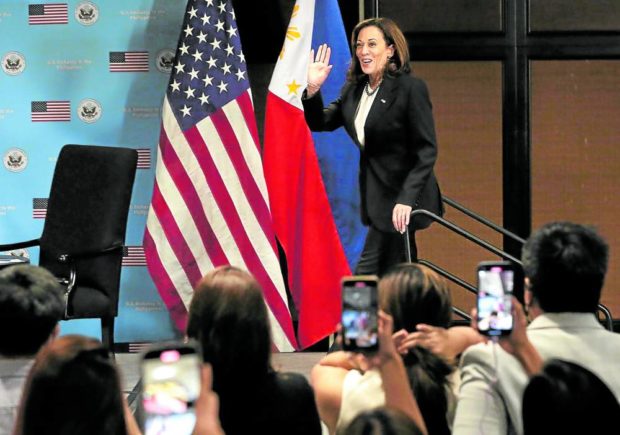 FILE PHOTO: US Vice President Kamala Harris arrives at Sofitel Philippine Plaza Hotel on Monday, November 21, 2022, for a town hall meeting where she talked about the empowerment of women and girls. (Photo by RICHARD A. REYES / Philippine Daily Inquirer)

MANILA, Philippines — Kamala Harris is not an icon of women’s empowerment. Her visit to the Philippines is only for military expansion, putting Filipino women at heightened risk of abuse and exploitation.

Gabriela Rep. Arlene Brosas vented her ire and irritation over the US vice president’s recent visit to the Philippines, who also spoke at a women’s rights event during her stay.

Brosas, in a press briefing on Thursday, claimed Harris carried with her the geopolitical agenda of the US, which does not focus on empowering women but strengthening their military position in Southeast Asia.

In particular, her trip included discussions of additional Edca sites, such as the two stations in Palawan amid Chinese aggression in the West Philippine Sea.

Harris was in the Philippines for a state visit and met with government officials like President Ferdinand Marcos Jr. and Vice President Sara Duterte. She discussed women’s empowerment and climate change in one of her talks on the sidelines.

According to the US official, democracy is defined by the status of women in society. But Brosas countered Harris’ supposed posturing, noting that the Enhanced Defense Cooperation Agreement (Edca) places women in peril.

“We urge our fellow Filipinos to reject the nuclear deal between the US and the Philippine government, as well as the construction of more EDCA sites across the country which will make Filipino women more vulnerable to violence and abuse,” the lawmaker said.

(Harris brings with her the US geo-political agenda, which would surely hurt the country, like the civil nuclear cooperation agreement, which would bear nuclear wastes that can affect public health and the environment.)

Brosas was referring to negotiations for nuclear energy cooperation between the US and the Philippines – the “123 Agreement” — kickstarted when Harris visited the country.

The 123 Agreement is a deal that the US forges with allies – based on Section 123 of the US Atomic Energy Act –  which disallows partner countries from using the partnerships for nuclear energy to create nuclear weapons.

But Brosas and her fellow Makabayan bloc lawmaker, Alliance of Concerned Teachers Rep. France Castro, are wary that the deal combined with the Edca – which allows US troops to operate in the country – would put the Philippines in China’s crosshairs considering the Washington-Beijing rivalry.

“First of all, even if they say that it is for civilian use, that is an experimental technology. That’s why we said that we would be guinea pigs in that cooperation. Second, there is a huge risk of being involved in that with China and US tensions […] These problems, we should not be involved between China and the US because that is dangerous,” Brosas said.

“If the nuclear sites are placed near our military bases where the US also takes base, we can be targeted by China – we know the status of the rivalry between China and the US, and it would be very risky and possibly damaging to Filipinos. We call on the Marcos Jr. administration to study this intently,” Castro added.

Last Tuesday, Makabayan bloc legislators filed a resolution seeking an investigation into negotiations around the 123 Agreement, believing it may pose more dangers than advantages.

A senior US official who spoke anonymously after Harris’ arrival in Manila last Sunday, November 20, said it is important that the Philippines and US start talks on the 123 Agreement so that the US can provide exports of nuclear material and equipment.

In a fact sheet released on the same day, Harris’ office said the start of the 123 Agreement negotiations signifies that the US is committed to addressing the Philippines’ energy problems.