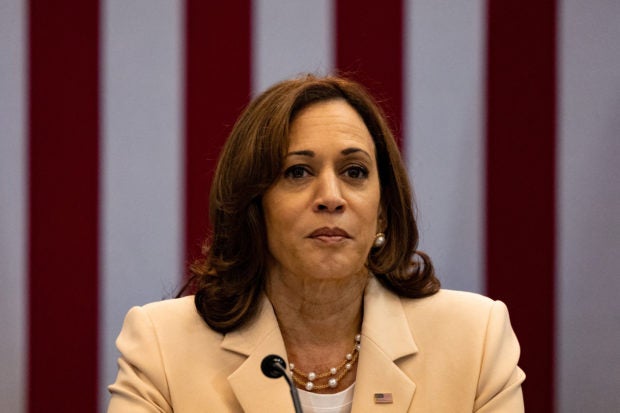 MANILA, Philippines — US Vice President Kamala Harris will tackle not only security matters in her visit to Palawan but also climate issues affecting fisherfolk, according to a senior US administration official.

The official spoke in an interview on Sunday evening (Philippine time) on the condition of anonymity.

“The vice president will be speaking publicly in Palawan. I think we’ve discussed before that the purpose of her trip to Palawan was beyond just getting outside of the capital city — which is something she likes to do in the country she visits and is always interested in seeing things outside the capital. It’s to underscore the importance of environmental protection,” the official said.

“Palawan is a place where fishing communities are setback by environmental challenges — both from climate change but also from illegal unreported fishing. So the climate crisis is the theme of the vice president’s trip. Frankly, it’s been a theme that she stresses wherever she goes,” he added.

The trip will also give Harris a chance to stress the need of having rules to ensure freedom of navigation in the West Philippine Sea, where Filipino fisherfolk have been facing challenges due to a maritime dispute between the Philippines and China.

“This [engagement] in Palawan is an opportunity to underscore —and to help Philippine [fisherfolk], our allies — those challenges,” the official said.

The US vice president’s trip to Palawan made the headlines as the island province borders the West Philippine Sea, with the Spratly Islands being the nearest to it.

The Philippine Coast Guard is expected to give Harris a tour of Palawan aboard a patrol vessel.

There were fears that Harris’ visit would cause tensions between the two Asian countries, but President Ferdinand Marcos Jr. said this should not be an issue as Palawan is part of Philippine territory.

“Of course, it is the closest area to the South China Sea, but it’s very clearly on Philippine territory. I don’t think it will cause problems,” he said.

Harris is expected to meet Vice President Sara Duterte first before talking with Marcos for a “long bilateral meeting” on Monday.

Apart from that, Harris will have other engagements, among them the launch of key nuclear cooperation negotiations between the US and the Philippines.

Harris arrived in Manila on Sunday evening aboard Air Force Two and was welcomed by US Ambassador MaryKay Carlson and Filipino officials, led by Philippine Ambassador to the US Jose Manuel Romualdez.

Harris is the highest-ranked US official so far to visit the Philippines under the Marcos administration.

Before her, during the previous Duterte administration, then-President Donald Trump made a trip to Manila to attend the 2017 Association of Southeast Asian Nations Summit.