Harris: US stands with PH vs coercion in South China Sea | Inquirer News 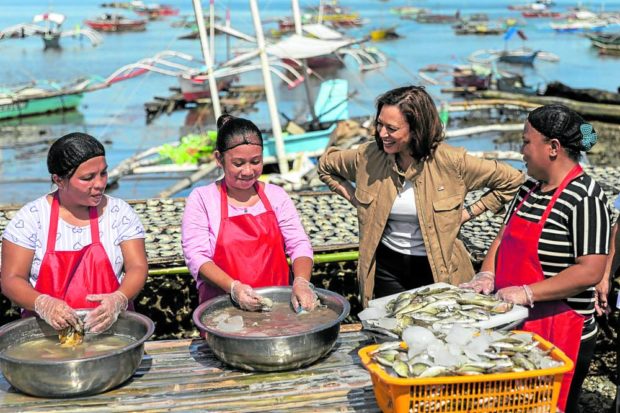 LAST STOP BEFORE RETURNING HOME | US Vice President Kamala Harris drops by a fishing community in Barangay Tagburos after her arrival in Puerto Princesa, Palawan province, on Tuesday, the third and last day of her visit to the Philippines. (REUTERS)

PUERTO PRINCESA CITY, Palawan, Philippines — US Vice President Kamala Harris on Tuesday afternoon visited this province closest to the West Philippine Sea, in a show of support for the Philippines’ assertion of sovereignty over its exclusive economic zone, amid Beijing’s occupation of several areas within the country’s waters.

Palawan was Harris’ last stop during her three-day visit to the country before she left this provincial capital around 4 p.m. on her way back to the United States.

The US Embassy in Manila said she left Yokota Air Force Base on board a flight to Los Angeles late Tuesday afternoon.

Harris arrived at the Puerto Princesa City airport on board a US aircraft at 12:05 p.m.

From there, she went to Barangay Tagburos to meet with the fisherfolk community, then met with other residents before she boarded the Philippine Coast Guard’s BRP Teresa Magbanua to address her audience of provincial and military officials, Coast Guard personnel, and the media.

Harris said from the ship’s deck, “Here in the South China Sea and around the world, to uphold the international rules and laws in South China Sea is to support the lives through the region.”

She added: “As an ally, the United States stands with the Philippines in the face of intimidation and coercion in the South China Sea, [and] we support the 2016 ruling of the UN (United Nations) arbitral tribunal which delivered a unanimous and final decision formally rejecting China’s expansive South China Sea maritime claims.”

“The [Hague] tribunal’s decision is legally binding, and must be respected,” the US vice president said further. “We will continue [to support] our allies and partners against unlawful and irresponsible behavior.”

The US vice president reaffirmed her country’s “unwavering” commitment to defending the Philippines if its vessels or aircraft were attacked in the South China Sea.

China claims sovereignty over almost the entire sea and has ignored the 2016 ruling against its claims.

The ruling was based on the United Nations Convention on the Law of the Sea to which Beijing is a signatory.

Washington has a decades-old security alliance with the Philippines that includes the 1951 Mutual Defense Treaty and the Enhanced Defense Cooperation Agreement, the 2014 pact which allows the US military to store defense equipment and supplies on five Philippine bases.

China on Tuesday said it saw no problem with Harris’ visit, particularly to Palawan.

“We are not against the US interaction with regional countries. But it should be good for regional peace and stability and not damaging to other countries’ interests,” the Chinese Embassy in Manila quoted Foreign Ministry spokesperson Mao Ning as saying.

Mao’s remark was in contrast to China’s reaction when US House Speaker Nancy Pelosi visited Taiwan in August.

In her Palawan speech, Harris also announced additional areas of cooperation between Washington and Manila.

The United States is allotting $7.5 million in additional assistance for this undertaking. 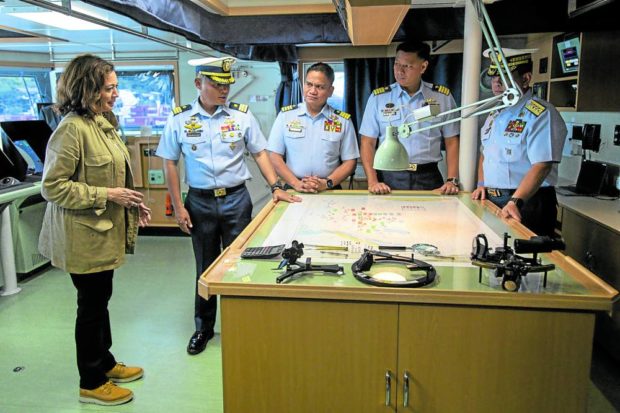 LOOKING AT THE MAP | Harris is briefed by members of the Philippine Coast Guard at the BRP Teresa Magbanua, docked at Puerto Princesa City on Thursday. (REUTERS)

The fresh funding would enable Philippine maritime law enforcement agencies to increase their capacity and capability to counter illegal fishing, improve maritime domain awareness, and provide search and rescue support, including in the South China Sea, according to an advance fact sheet sent by the US Office of the Vice President to the media.

Harris also said the United States Agency for International Development was launching a new partnership with local stakeholders in the western Philippines, to support traditional livelihoods and sustainable fishing practices, strengthen food security, and advance the conservation of marine ecosystems in the South China Sea that are vulnerable to development and climate change.

In her dialogue with residents in Tagburos, they discussed the impacts of illegal fishing on the village which, despite its small population of around 1,500 families, produces about half of the fish supply of Puerto Princesa.

But not everyone in the country welcomed the US official’s visit.

A fisherfolk group has urged Harris not to capitalize on the plight of the Filipino fisherfolk to justify the construction of more military bases in Palawan.

Pamalakaya chair Fernando Hicap asserted his group’s opposition to “any military intervention, [whether] Chinese or American troops, [that] trample on our sovereign rights and territorial integrity.”

He accused Harris of visiting not to talk peace but to “provoke China and push them to become more aggressive and hostile in the West Philippine Sea, at the further expense of the fishing security of Filipinos.”