No ramping up 2nd booster coverage despite dose wastage 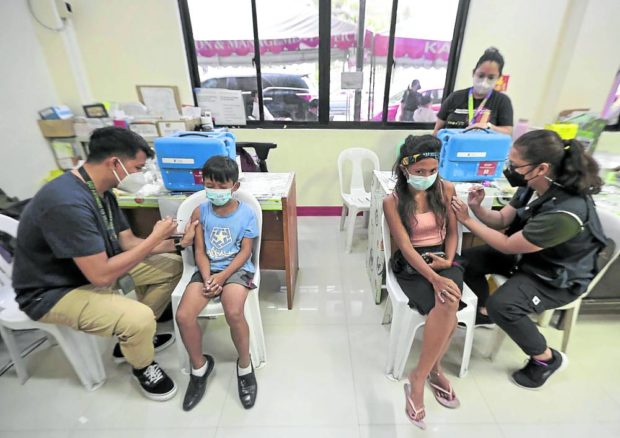 MANILA, Philippines — The Department of Health (DOH) will still not expand the second booster doses to the rest of the population despite the country’s soaring COVID-19 vaccine wastage rate, which officer in charge Maria Rosario Vergeire on Tuesday pegged at 12 percent.

In a press conference, Vergeire said that “we are not going against science or evidence just because we have expired vaccines.”

Second boosters are only eligible for three priority groups: healthcare workers, the elderly, and individuals with comorbidities aged 18 and up.

She defended the 12 percent vaccine wastage rate as within the considered “acceptable level” based on the World Health Organization’s (WHO) recommendation that was raised between 25 and 30 percent but is higher than its earlier threshold at 10 percent or lower.

The country’s vaccine wastage rate surged in the last seven months. Last April, it was pegged at only 2 percent. It more than doubled to 4.7 percent by June, before it further climbed to 6.6 percent two months later.

Citing the WHO’s raised standard, Vergeire said: “The situation is evolving because of COVID-19. It’s not just the Philippines experiencing this kind of situation in terms of logistics and vaccines, we are seeing more and more countries having this wastage of vaccines and other commodities.”

Vergeire said of the 31 million vaccines considered wasted, 24 million were already past their shelf life and seven million were from “operational wastage,” or jabs that were destroyed due to calamities, broken vials and those that had temperature “excursion” that went past the recommended range.

She stressed that some of the 24 million wasted vaccines are still set to be replaced by the COVAX Facility based on an outstanding agreement with the government.

Some senators are looking to start an inquiry into the vaccine procurement and wastage after learning about the volume of COVID-19 shots valued at P15.6 billion. They also raised alarm over the absence of a Commission on Audit report on the government spending for the vaccination program.

The DOH last week welcomed any inquiry, saying it would make itself available to scrutiny by Congress.

Vergeire said the DOH would still carry out the usual interventions and strategies of bringing vaccines “closer to people,” such as the conduct of another “Bakunahang Bayan” scheduled on Dec. 5 to 7, focusing on the primary vaccination of kids aged 5 to 11.

As of Nov. 20, only 5.3 million out of the target 10.9 million children, or nearly half, have received their first two COVID-19 doses.

Nine in 10 Filipinos are up-to-date with their COVID-19 shots as they got their primary doses and boosters based on eligibility. But they also want to receive bivalent vaccines, the new generation vaccines that can provide protection for two COVID-19 strains.

A DOH survey showed that around 90 to 92 percent of Filipinos were “very much willing and interested” to get inoculated with bivalent vaccines currently developed by vaccine manufacturers to contain the more contagious Omicron, which is still the dominant variant globally, and the original COVID-19 strain.

Among those who received only the primary doses, around 68 percent are also keen on getting the bivalent jabs.

Vergeire said the DOH survey was done to help the government get an estimate of the number of bivalent vaccines it would purchase in the initial tranche.

The Nov. 20 DOH data showed a low booster coverage with only 20.9 million or about only 27 percent of the eligible 78 million individuals receiving their first booster shots.

She added that the private sector could also gather similar data on potential bivalent vaccine uptake in their companies to prevent another batch of wasted vaccines.

Around 70 percent of the 24 million expired or expiring doses came from either the private sector or the local government, Vergeire noted.

“To be efficient, it is better if the local government or private sector who are interested to purchase [vaccines] know the demand in their area or among their employees so there would be no wastage,” she said in a press briefing.

But Go Negosyo founder Joey Concepcion on Tuesday discounted claims by Vergeire that the majority of the expired vaccines were privately procured, noting that only 9.3 million of the 23.5 million doses they secured through a tripartite agreement with the government and vaccine manufacturers have expired.

On Monday, Vergeire was quoted by ABS-CBN as saying that almost 70 percent of the expired vaccines were procured by the private sector and local governments.

Concepcion, who is part of the government’s private sector advisory council, said: “There are clearly several gaps that led to the expiry of the vaccines,” saying that they tried to point out some of those gaps, including the need to listen to the science and real-world data from abroad.

“We need to learn from this experience and lay down clear guidelines for vaccinations,” he added.

—WITH A REPORT FROM ALDEN MONZON

$5 million from US to boost COVID vaccine rollout