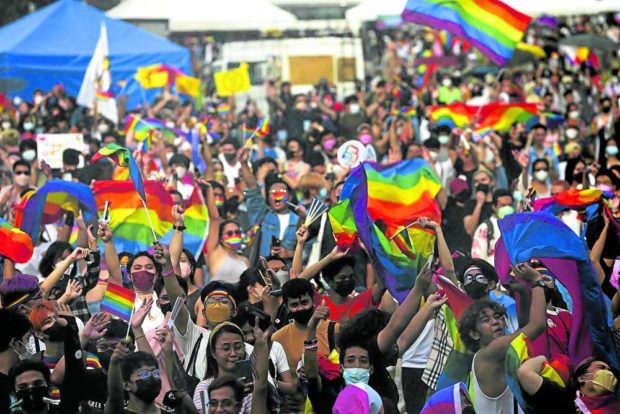 MANILA, Philippines — The Commission on Human Rights (CHR) called on the national government to “keep an open mind” and reconsider its rejection of a UN Human Rights Council (UNHRC) recommendation to pass a gender equality bill and other similar measures protecting the LGBTQ community.

In a statement, the commission reminded Justice Secretary Jesus Crispin Remulla that several local governments have already promulgated ordinances protecting their constituents against discrimination on the basis of sexual orientation and gender identity.

As such, his statements that the passage of a Sexual Orientation, Gender Identity and Expression (Sogie) bill was “not acceptable” in the Philippines as a predominantly Catholic country would not only “downplay” those efforts but further “embolden” discrimination against LGBTQ members in the name of religious beliefs.

Last week, Remulla led the Philippine delegation to the country’s Universal Periodic Review (UPR) in Geneva, where 107 member states urged President Marcos’ administration to end the policy of Red-tagging and the climate of impunity against activists, rights workers and journalists.

Most of the 289 recommendations made by the member states urged the Philippines to protect the interests of vulnerable and marginalized groups, such as women, children, indigenous folk and the LGBTQ. While the delegation accepted 200 of those recommendations, it rejected calls to push legislation on gender identity, same-sex marriage and divorce, citing religious grounds.

CHR Chair Richard Palpal-latoc said that while respect for other people’s beliefs was part of upholding other people’s rights, the Sogie bill and other similar proposals were part of the country’s obligations to ensure that every citizen is free from threats and harm and is treated equally.

“We urge the Philippine government to reexamine this position, given that the 1987 Philippine Constitution mandates the State to value the dignity of every human person and thereby guarantee full respect for human rights (Article II, Section 11), as well as to provide to all persons the equal protection of laws (Article III, Section 1),” Palpal-latoc said.

He added that the commission was willing to dialogue with the government to address misconceptions about the Sogie bill and related measures.

For one, the present version of the Sogie bill does not contain any provision on same-sex civil unions and does not, contrary to the belief of certain sectors, “grant special privileges to the LGBTQ community,” the CHR chief noted.

“In the end, the country will be judged and viewed through how it treats the weak, vulnerable, and marginalized. The challenge before the government is to serve and address the plight of the unseen and unheard, to recognize silenced realities, and live up to its commitment that will unconditionally uphold the inherent human rights, dignity, and worth of all regardless of their identity,” Palpal-latoc said.