Other Ampatuans uneasy with massacre memory 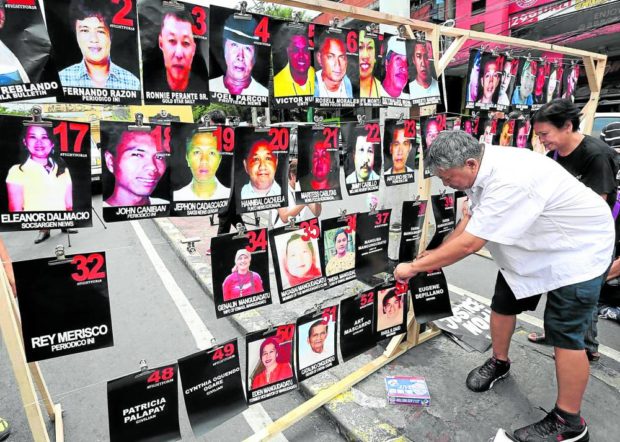 NOT FORGOTTEN | Photographs of the 58 people, including 32 journalists and Maguindanao Rep. Esmael Mangudadatu’s wife and sister who were massacred by his rivals, are shown at Mendiola Bridge on Nov. 23, 2019, a decade after that massacre. (Photo by MARIANNE BERMUDEZ / Philippine Daily Inquirer)

SHARIFF AGUAK, Maguindanao del Sur, Philippines — Members of the Ampatuan clan who have no involvement in the Maguindanao massacre 13 years ago still suffer from the stigma associated with the crime and feel bad when it is commemorated every Nov. 23.

Anwar Emblawa, executive secretary of Shariff Aguak Mayor Akmad “Mitra” Ampatuan, said: “Right after the massacre, many of our younger clan members surnamed Ampatuan who were studying (outside Maguindanao) suffered severe anxiety due to intense discrimination, especially from [people in] Luzon, [who] thought that all the Ampatuan clan members were involved.”

“That’s totally unfair. Only some members of the family within the clan were involved,” said Emblawa, a kin of the Ampatuans.

The massacre happened as then Maguindanao Gov. Andal Ampatuan Sr., incensed at a possible challenge to his family’s grip on power, tried to stop the filing of a certificate of candidacy for governor by then Buluan town Vice Mayor Esmael Mangudadatu for the 2010 general elections.

Mangudadatu’s wife, Genalin, and his sisters were accompanied by journalists and other workers from the media mostly from General Santos and Koronadal cities to cover the event.

But Ampatuan’s men flagged down their convoy along the national highway in Barangay Kauran, Ampatuan town, and with eight other motorists who were just passing by the route, brought to the isolated hills of Sitio Masalay, Barangay Salman, where they were shot with high-powered firearms and buried in shallow graves, apparently to hide the crime.

The massacre was led by then Datu Unsay Mayor Andal Jr., more known as Unsay. Mitra was a trusted aide of Andal Sr.

With 32 journalists and media workers slain, it was the worst single attack on the media and the deadliest election-related violence in the country.

Emblawa said the stigmatization still lingers today, and the undue tarnishing of their image has somehow made the other Ampatuans also a victim of the massacre.

He noted that every time Nov. 23 nears, the Ampatuan clan members who have had no hand in the crime feel bad about being reminded of the ghastly memory.

Mitra served as a state witness against his relatives accused of carrying out the carnage, among them Ampatuan patriarch Andal Sr. who died of a heart attack in 2015 while in detention, and Andal Jr. who was anointed by his father to be the next governor of the province.

Emblawa said that as much as possible, they preferred to keep silent to avoid recalling the scars of the incident.

In December 2019, Judge Jocelyn Solis-Reyes of the Quezon City Regional Trial Court Branch 221 found Andal Jr., his brothers Zaldy and Anwar, and 25 other principal suspects guilty beyond reasonable doubt in the 2009 massacre.

The court ordered them to pay the victims’ heirs a total of P155.5 million for civil indemnity; moral, exemplary, temperate and actual damages; and loss of earning capacity.

The Ampatuans have appealed the court’s decision.

Thirteen years on, danger still lurks for journalists in the Bangsamoro Autonomous Region in Muslim Mindanao (BARMM) where Maguindanao belongs.

Crizbelle May Tapia Lorenzo, a young field reporter of Kutangbato News, was a campus writer when the massacre happened. “It is still risky covering the areas of the BARMM,” she admitted.

“It’s my passion to report what’s happening on the ground. There’s always fear but my drive for truth-telling is overpowering whatever fear I have,” Lorenzo said.

No justice yet for journalists killed in Ampatuan