No justice yet for journalists killed in Ampatuan | Inquirer News

No justice yet for journalists killed in Ampatuan 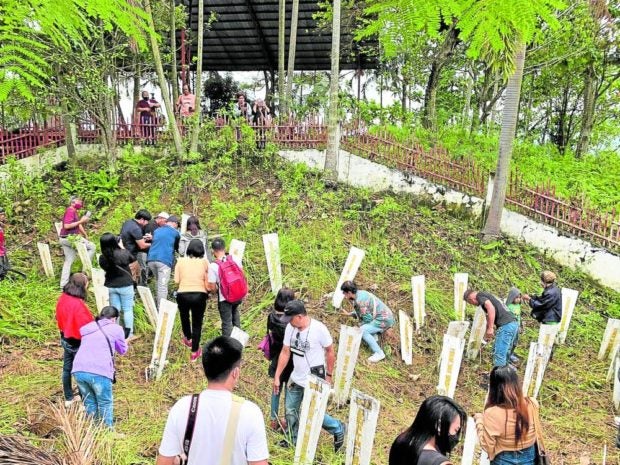 ILIGAN CITY, Lanao del Norte, Philippines — The memorial site of the 31 media workers waylaid and killed in the town of Ampatuan of the then undivided Maguindanao province 13 years ago has been overgrown with grass and weeds but media colleagues who visited the site in Sitio Masalay, Barangay Salman, on Sunday assured families and friends of the victims they had not abandoned the quest for justice.

Jonathan de Santos, national chair of the National Union of Journalists of the Philippines (NUJP), said travel restrictions and the series of lockdowns during the height of the coronavirus pandemic might have kept them away for a while but the calls for justice for the slain colleagues would not stop until justice is attained.

“That’s why it is good that all of us are here today to show each other that we have not forgotten the campaign for justice for the relatives and colleagues we lost in the Ampatuan massacre,” said De Santos in a message delivered at the massacre commemoration at the Ampatuan site on Sunday, three days ahead of the anniversary of the gruesome event that occurred on Nov. 23, 2009.

The slain journalists were among 58 people killed by a group of armed men identified with the powerful Ampatuan clan. They were on their way to a local elections office to file the certificate of candidacy of then Buluan Vice Mayor Esmael “Toto” Mangudadatu, who was running for governor against Datu Andal Ampatuan Jr., then mayor of Datu Unsay and son of the then incumbent governor, Andal Ampatuan Sr.

De Santos said few things had changed three years after the court handed down the decision on the case in December 2019, convicting 43 of the 48 accused — 28 of the principals, among them eight members of the Ampatuan clan including Andal Jr., and 15 accessories.

An appeal by the prosecution led to the conviction of one more accessory to the case, bringing to 44 the total number of people convicted, De Santos said, citing the update from the Office of the Press Secretary and lawyer Nena Santos, legal counsel of the victims’ families.

At least 83 more accused are still at large but Malacañang has promised that the government will not forget the case, De Santos said.

“Some of the Ampatuans who were convicted have filed appeals, and that is why we say that we only got partial justice in 2019,” De Santos said.

“Until there is a final conviction, we cannot say that we have received justice. And part of that justice is the compensation for the families who lost their loved ones on Nov. 23, 2009,” he added.

Santos said they were still awaiting the decision of the Court of Appeals on their appeal to increase the damages for each of the slain media worker to at least P500,000 to give dignity for the slain victims.

NUJP vice chair Kath Cortez said journalists helped the families clean up the gravesites of their slain colleagues and restore the markers that were destroyed in the last two years when the maintenance of the place seemed to have stopped.

“While we wait for developments in the case, we can keep calling attention to and calling for justice for the massacre victims,” De Santos said.

“As members of the media, we can continue reporting on the case and the delays as well as check on the convicted masterminds while in government custody and continue reminding the public about the Ampatuan massacre and about other attacks on journalists. As for NUJP, we reaffirm our commitment to the families that we are with in this fight and that we will continue to work together to call for justice in this case,” he added.