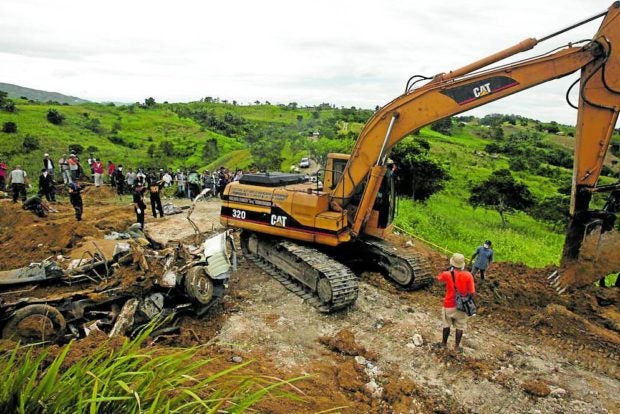 MASS GRAVE The site where at least 50 bodies, mostly those of journalists, were found buried in Datu Ampatuan, Maguindanao. Their vehicles were likewise buried. —REM ZAMORA

MANILA, Philippines — Full justice remains elusive for families of journalists and media workers killed in the Maguindanao massacre two years after the partial promulgation of the case that convicted members of the political Ampatuan family.

The massacre occurred on the morning of Nov. 23, 2009, in the town of Ampatuan in Maguindanao when a convoy of several vehicles carrying 58 people were intercepted, abducted and later killed. They were on their way to file the certificate of candidacy for Esmael Mangudadatu, then vice mayor of Buluan town.

Out of the 80 accused who were at large when a Quezon City court rendered a partial decision in December 2019, only five have since been arrested. Fourteen of these suspects have an Ampatuan surname.

According to the National Union of Journalists of the Philippines (NUJP), the Presidential Task Force on Media Security said four of the accused—Gambayan Kasim, Faisal Dimaukom, Police Officer 1 Ysmael Baraquir and PO1 Alfie Pagabanga—were arrested in 2020, while Andami Singkala was arrested in 2021.

But NUJP chair Jonathan de Santos said they could not consider the case resolved because the ruling of Judge Jocelyn Solis-Reyes of Branch 221 of the Quezon City Regional Trial Court was still under appeal.

De Santos said the court had yet to serve justice for the family of the 58th victim, media worker Reynaldo Momay, who was excluded from the case because his body was never found.

“In a press conference in 2020, [Momay’s daughter] Reynafe Castillo said that, ‘for me, forgetting is not an option … and will never be an option,’” De Santos added.

Nena Santos, counsel for former Maguindanao Governor Mangudadatu and many of the massacre victims, said they had filed a second wave of cases against 49 accused who were involved in the planning, execution and coverup of the gruesome massacre in 2009.

“We have the indictment of eight among the 49 that we filed and one of the eight died. There is no apprehension of the seven yet, while the rest of the 41 is on appeal with the Office of the President,” said Santos, adding that the families also filed an appeal for higher civil damages.