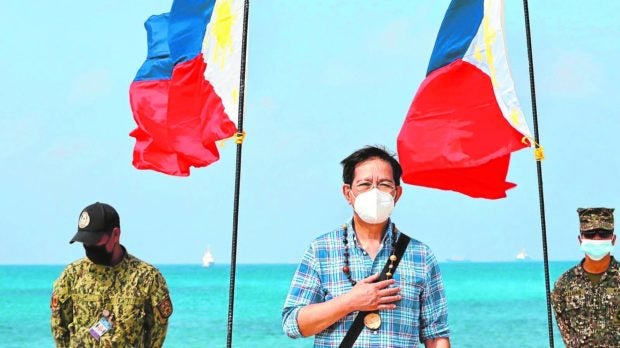 MANILA, Philippines — Sen. Panfilo Lacson, presidential standard-bearer of the Partido para sa Demokratikong Reporma, visited Pag-asa Island on Saturday and reiterated his call for allies of the Philippines to restore the balance of power in the South China Sea.

Officials of the Armed Forces of the Philippines Western Command briefed Lacson, chair of the Senate defense committee, on the situation in and around Pag-asa Island, the administrative center of Kalayaan town.

Lacson made the visit only days after the Chinese Coast Guard fired water cannons at Philippine boats on a supply mission to the BRP Sierra Madre in Ayungin Shoal, 227 kilometers southeast of Pag-asa Island.

No one was hurt during the incident that took place on Tuesday, but the boats had to abort their mission.

The Department of Foreign Affairs protested the Chinese action, but Beijing said it was only defending their territory in the Spratly Islands.

‘Bullied in our own territory’

“We cannot just let China or any country continue to bully our fisherfolk or water-cannon our troops in our own territory,” Lacson told reporters when he returned to Puerta Princesa City from Pag-asa Island.

“We need the help of our allies, not to provoke war with China but to maintain a balance of power,” he added, reiterating his earlier proposal to get some of the country’s strongest allies to help restore the “balance of power.”

He said the Philippines must strengthen its alliances its Southeast Asian neighbors and other countries like the United States, the European Union, Japan, and Australia.

“I suggested to the officers of the [AFP] there to influence the national leadership to go that direction because we’re so helpless,” he said.

During his visit, Lacson expressed disgust at how the plane he was riding received a “challenge” on radio from the Chinese Coast Guard as it was about to land on Pag-asa island.

“After landing on the airstrip, [police personnel] who were with us received notification on their mobile phones stating, ‘Welcome to China.’ To me this is odd, unusual, because we are in our own territory, and we get that kind of treatment,” he said.

He said the names of the place — Pag-asa and Kalayaan — capture the people’s yearning that should guide the government in its foreign policy.

“Pag-asa is hope for lasting peace in the region, and Kalayaan is freedom of navigation for all,” he said, lamenting the current situation of the troops and civilians on the island.