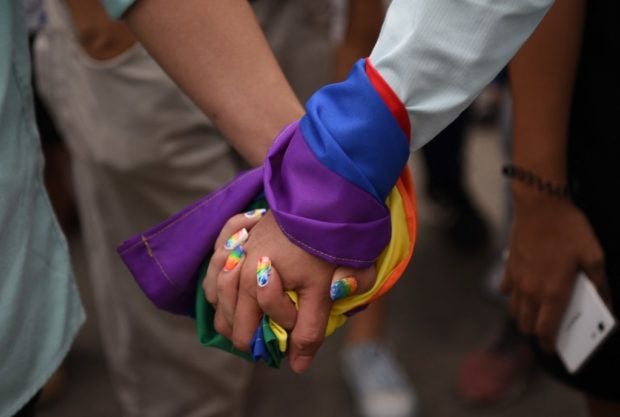 A couple holds hands wrapped in a rainbow flag as thousands of Lesbian Gay Bisexual Transgender/Transexual Queer (LGBTQ) members hold a pride march at a sports complex in Marikina City in this file photo taken on June 30, 2018. AFP photo

MANILA, Philippines — The Philippine government is firm against same-sex marriage.

Same-sex marriage was among the recommendations made by member-states of the United Nations Human Rights Council on the Legalization of Abortion and Divorce that was rejected by the country.

“Culturally, our values may [has a] conflict with many of the values that they want to impose upon us…That’s what we believe, ha, unless somebody argues otherwise; that is our position right now,” Justice Secretary Jesus Crispin Remulla said in a press conference.

Over the weekend, Remulla also said that the country is rejecting measures such as the Sexual Orientation, Gender Identity, and Expression Equality (SOGIE) bill.

“I think, culturally, we are not ready for that,” Remulla said.

If the country rejected same-sex marriage, it has deferred its stand on divorce because, according to Remulla, it is a matter that is up to the legislators.

“We cannot immediately grant it unless the legislature properly debates about it and lays down the premises–advantages and disadvantages,” Remulla said, adding that he believed that the Philippines is now one of the few countries that do not allow divorce.

Justice Undersecretary Raul Vasquez said the Philippines had accepted 200 of the 279 recommendations by the UN body. Of the 79, he said they deferred from accepting it, such as divorce, because it requires the participation of another branch of the government.

While same-sex marriage, he said, was rejected because “of our national identity, our religious beliefs, and our cultural traditions and the Philippines sovereignty that we need to protect and uphold at all times.”