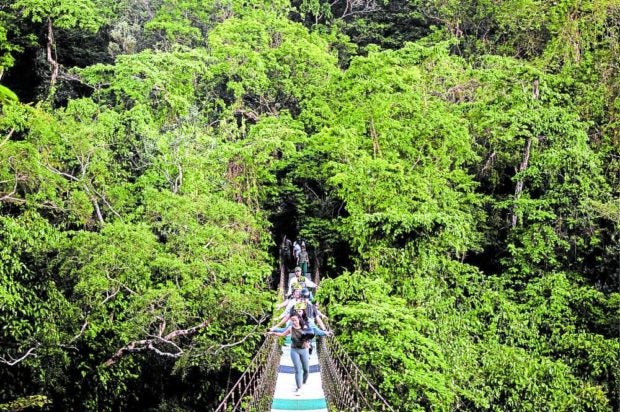 MANILA, Philippines — The Masungi Georeserve Foundation on Monday said the recent statements made by Department of Environment and Natural Resources (DENR) officials about its contract with the government to conserve a protected area were “libelous, irresponsible and baseless.”

“We are deeply disappointed that after investing our own resources and risking our lives to help the government protect and restore the Masungi landscape, it now claims, five years later, that the Masungi Geopark Project (MGP) Memorandum of Agreement (MOA) signed with DENR Secretary Gina Lopez in 2017 is ‘illegal, infirm and disadvantageous to the government,’” the foundation said in a statement.

In a hearing on her department’s budget at the Senate on Nov. 16, Environment Secretary Maria Antonia Yulo Loyzaga said that the MOA was disadvantageous as it resulted in the loss of millions of Special Use Agreements in Protected Areas fees.

Sen. Cynthia Villar, who defended the DENR’s proposed P23-billion budget for next year, also said the contract was “wrong and illegal,” citing the department’s report to the Senate on the alleged complications posed by the agreement.

“The unfounded allegation that the MGP is illegal and money-making discredits the hard work and sacrifice of Masungi, its rangers and partners, and assaults its integrity,” the foundation said, adding that the MOA was valid and binding unless otherwise declared by a court.

The DENR report claimed that the agreement allowed for a perpetual land trust between the two parties which was “in direct contravention [of] Sec. 2 Art. 12 of the Constitution which limits the terms of agreements for the use of natural resources to 25 years, renewable for under 25 years, not for a perpetual period.”

But according to the foundation, perpetual conservation is the essence of protected areas. “Contrary to malicious insinuations, the MOA is not a gift or grant of land or benefit to Masungi. Masungi is merely a trustee and overall project manager who could be replaced if it violates the MOA,” it said.

It emphasized that it is a registered nonstock, nonprofit foundation that contributes to land conservation through research, engagement with forest rangers and educational initiatives meant to inspire love for nature.

“Masungi is not raking in profits. Conservation fees go to reforestation, rewilding, protection and maintenance,” it said.

The DENR report also accused the foundation of not informing local government officials in Baras, Tanay and Antipolo, all in Rizal province, of its plans and also depriving indigenous communities and longtime residents in the area of access to their homes.

But according to the foundation, indigenous cultural communities (ICC) have been its allies in conservation efforts and confronting destructive activities like quarrying and land grabbing.

It added that along with the DENR, National Commission on Indigenous Peoples (NCIP) and concerned ICCs, it conducted dialogues in 2021 to formalize partnerships and plans that resulted in its application for a certification precondition (CP) for the geopark project.

“However, it is the DENR that is holding up the CP process by refusing to provide a mandatory endorsement letter despite multiple requests from Masungi, the ICCs and the NCIP,” it said.

The foundation added that it was the DENR that was “showing bad faith” aside from being the “one at fault.”

“Until now, it continues to evade its contractual obligation to evict illegal occupants and cancel fraudulent instruments, thereby exposing Masungi trustees and rangers to the hostility and violence of watershed abusers,” it said.

In September, the foundation asked for help after armed men occupied an area within the conservation site reportedly with the intention of seizing tracts of land and selling these to third parties. The police later confiscated their firearms and fined them P1,000 each for failing to present their guns’ licenses but did not arrest them.