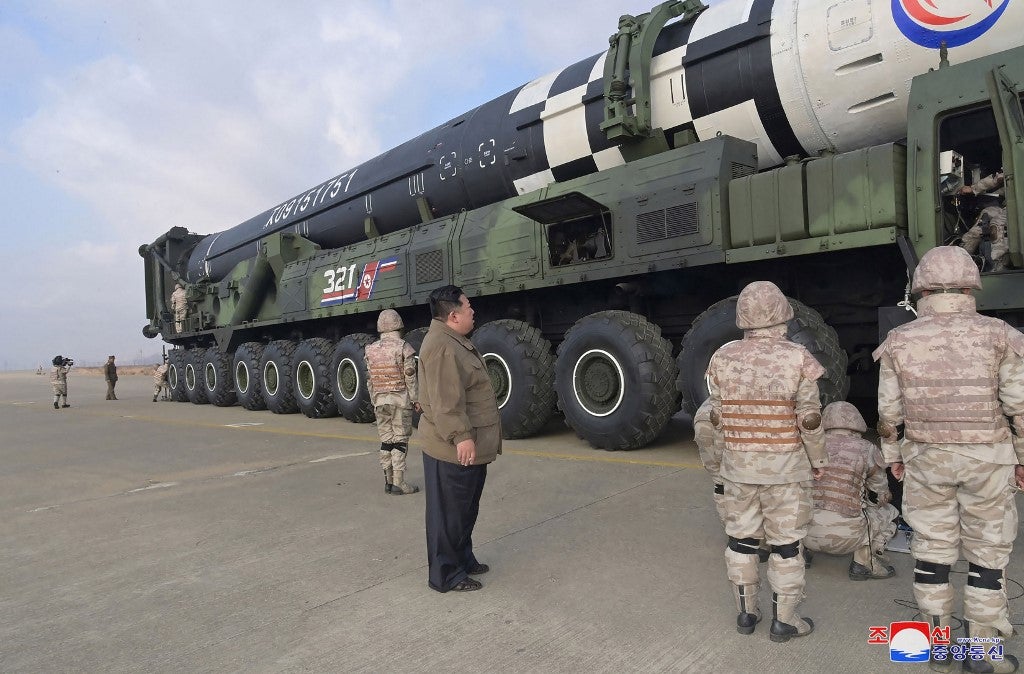 Since Kim declared North Korea an “irreversible” nuclear state in September, Washington has ramped up regional security cooperation, including joint military exercises, and is looking for ways to boost the protection it offers Seoul and Tokyo.

Kim slammed what he called “aggression war drills” and said that if America continues to make threats against the North, Pyongyang “will resolutely react to nukes with nuclear weapons and to total confrontation with all-out confrontation,” KCNA reported.

KCNA said that Kim attended the launch “together with his beloved daughter and wife” and state media images showed a beaming Kim walking in front of a giant black-and-white missile, accompanied by an adoring young girl in a puffer jacket and red shoes.

It is extremely rare for state media to mention Kim’s children, and this is believed to be one of the first official confirmations of his daughter, experts said.

North Korea has conducted a record-breaking blitz of launches in recent weeks, which Pyongyang — and some allies including Moscow — have repeatedly blamed on the US boosting regional security cooperation, including joint military exercises.

The Friday launch was of the country’s “new-type ICBM” the Hwasong-17, KCNA said, adding that the “test-fire clearly proved the reliability of the new major strategic weapon system.”

“Kim Jong Un said he came to confirm once again that the nuclear forces of the DPRK have secured another reliable and maximum capacity to contain any nuclear threat,” it added.

KCNA said the missile traveled “up to a maximum altitude of 6,040.9 km and flew a distance of 999.2 km” before “accurately landing on the preset area” in the East Sea, or Sea of Japan.

The distance and altitude match the estimates given by Seoul and Tokyo on Friday and are only slightly less than the ICBM Pyongyang fired on March 24, which appeared to be the North’s most powerful such test yet.

North Korea also claimed its March 24 launch was also of a Hwasong-17 — one of Kim’s largest weapons, dubbed the “monster missile” by analysts — but Seoul later cast doubt on that claim.

But this time, analysts said it seemed the North had succeeded.

“The Hwasong-17 is the largest road-mobile liquid-propellant missile ever designed and tested anywhere, so the North Koreans set a record of a sort with this successful flight-test,” said North Korea expert Ankit Panda on Twitter.

North Korea has fired scores of ballistic missiles this year — far more than any other year on record — and recent launches have been increasingly provocative, including firing a missile over Japan last month, triggering a rare air raid warning.

On November 2, Pyongyang fired 23 missiles, including one which crossed the de facto maritime border and landed near the South’s territorial waters for the first time since the end of hostilities in the Korean War in 1953. Seoul called it “effectively a territorial invasion”.

The next day, North Korea fired an ICBM — although Seoul said it appeared to fail mid-flight.

The most significant takeaway from Friday’s ICBM launch is “the permanence of the Kim regime’s weapons program because it is so integral to Kim’s own survival and the continuity of his family’s reign,” Soo Kim, a former CIA analyst now with the RAND Corporation, told AFP.

“This even addresses some of the curiosity and questions surrounding succession,” she said.

“We have seen with our own eyes the fourth generation of the Kim family. And his daughter — along with potential other siblings — will surely be groomed by her father.”