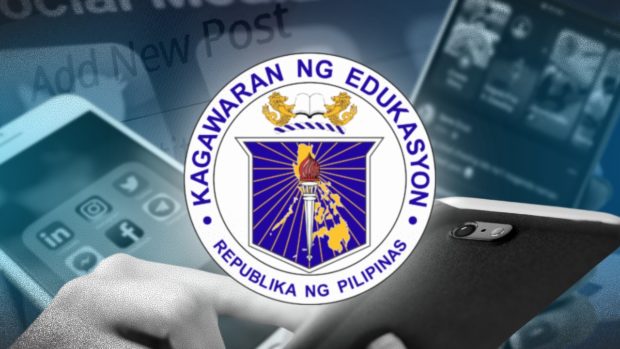 MANILA, Philippines—Last Oct. 21, the Alliance of Concerned Teachers’ (ACT) exasperation on the issue of “outdated and overpriced” laptops resonated with over 100 teachers expressing rage over the Department of Education’s (DepEd) “incompetence.”

This, as the Commission on Audit told the Senate Blue Ribbon Committee that 70 percent of the laptops intended for the DepEd Central Office were still being kept in the Asset Management Division stock room.

Because of this, Roel Mape, spokesperson of ACT, which hit the DepEd’s “endless incompetence” over the issue, called on the department to reveal how many laptops actually went to classroom teachers, saying that most laptops were given to DepEd offices, instead of schools.

The rage was shared by one teacher from Zambales, who stressed how “disheartened” she was to hear about the laptops: “I spent a lot improving my classroom during the Brigada Eskwela despite receiving meager pay, then I’ll only hear something like this.” 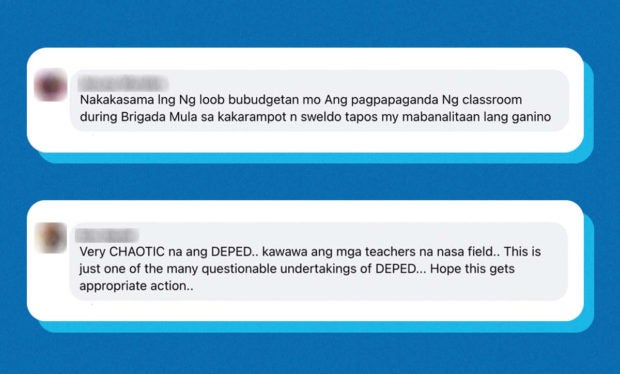 Screenshots of comments on ACT’s Facebook post regarding the “overpriced, outdated” laptops for teachers. The DepEd had said it was “taking steps” to address recommendations made by the COA, but stressed that the PS-DBM should be the one to answer questions and suspicions over the issue.

As stressed by Benjo Basas, chairperson of Teachers’ Dignity Coalition, teachers often end up expressing their sentiments on social media because they are not satisfied with how the DepEd is addressing their grievances.

“It’s [part of our] freedom of expression and right to self-organization,” he told Teleradyo on Monday (Nov. 7). 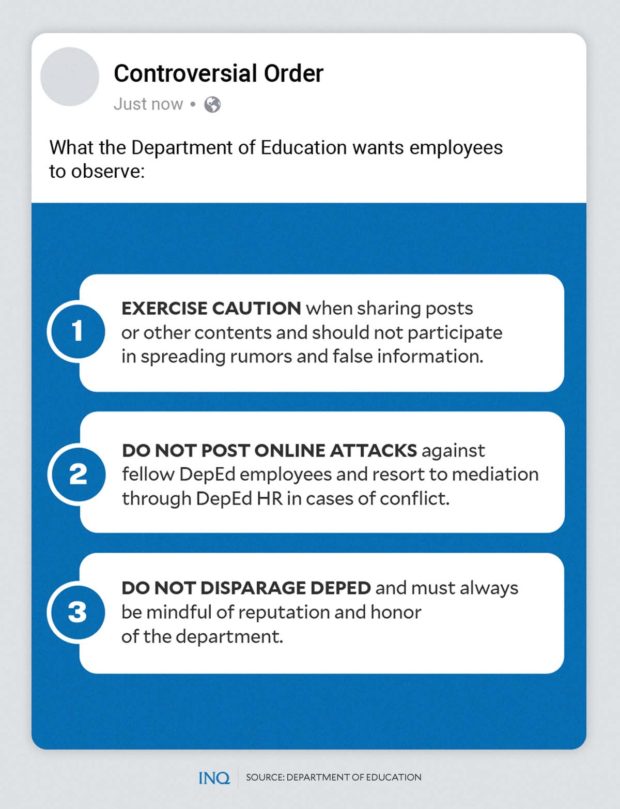 But with DepEd Order (DO) No. 49, which was signed by Vice President and Education Secretary Sara Duterte on Nov. 2, Rep. France Castro (ACT Teachers) expressed concern that the new directive could bar teachers and employees from exercising their rights to air grievances.

Castro stressed on Friday (Nov. 4) that some of the provisions of DO No. 49 “expands and even exceeds” the limits set in the Code of Conduct and Ethical Standards for Public Officials and Employees and the Philippine Teachers Professionalization Act of 1994.

‘Don’t disparage your own’

It was last Wednesday (Nov. 2) when the directive, which was intended to “promote professionalism” in the DepEd, was released to remind employees that they should raise issues and concerns on basic education through formal channels “without resorting to any political or third-party intervention or accommodation.”

But one of DO No. 49’s provisions stated that “employees and officials of the DepEd […] shall not disparage DepEd and must always be mindful of the reputation and honor of the organization.”

READ: VP Duterte to DepEd workers: Don’t ‘disparage’ your own

This, as the department stressed that “employees and officials must consider the legal restrictions imposed by existing statutes, rules, and DepEd Orders in the use of social media.”

“Whether it be for personal use of the DepEd official or employee, or as an essential or an accidental tool in carrying out their mandate, social media rules should be complied with,” the DepEd said in DO No. 49.

But Castro asked: “Why does DepEd feel the need to create such an order that gags and threatens teachers and education support personnel, which treats them as mere creatures only of the school and dehumanizes them, preventing them from exercising their right to free speech, expression, to organize and be able to voice out their grievances?”

“If the education department insists on gagging its employees online and offline and prevents them from relating to others on things, not about the school, what else is left of them?” she said.

Castro, who has been a teacher herself, stressed that teachers should be treated as individuals who contribute to society and are able to exercise critical thinking instead of being seen as robots who “blindly follow the state-sanctioned ‘truths’ of the administration.”

She then stressed that teachers already follow the Code of Conduct and Ethical Standards for Public Officials and Employees and the Philippine Teachers Professionalization Act of 1994.

But with the criticisms that the DO No. 49 received, lawyer Michael Poa, spokesperson of DepEd, said the directive does not seek to bar employees from exercising their rights as it was only a “reiteration” on maintaining professionalism within the department.

“If you look at the wording, it’s really more of a reiteration. Why? Because our teachers, for example, they are role models. I think, we all agree that they are all role models. And as role models, of course, they should act professionally and aside from that, they should always uphold the honor of DepEd in general,” he said.

READ: DepEd clarifies order on teachers’ use of social media to air criticisms

He told Teleradyo that “if they have grievances, we have existing machineries where they can raise their issues. Constructive criticisms are not prohibited.”

“We have no intention to infringe on their freedom of expression,” Poa said, stressing that all the things stated in the DO No. 49 are already found in the rules of the Civil Service Commission.

“We are not curtailing their right to post on social media. What we are trying to say is as civil servants, we really should not disparage our employer, being the government or our department. But it doesn’t mean that we don’t want to be criticized. It’s another thing,” he said.

However, ACT, which likewise hit the new directive of the DepEd, said it was “unprofessional” for the Vice President to refuse to address basic education issues only because they were made public or raised outside the department.

“In the guise of promoting professionalism, parts of the memo actually threaten the freedom of expression and right to redress grievances of DepEd personnel,” Vladimer Quetua, chairperson of ACT, said.

As stressed by Castro, instead of releasing an order that threatens the rights of teachers, the DepEd should address problems confronting the education system in the Philippines, like shortage in classrooms, lack of support for teachers and the worsening crisis in education. 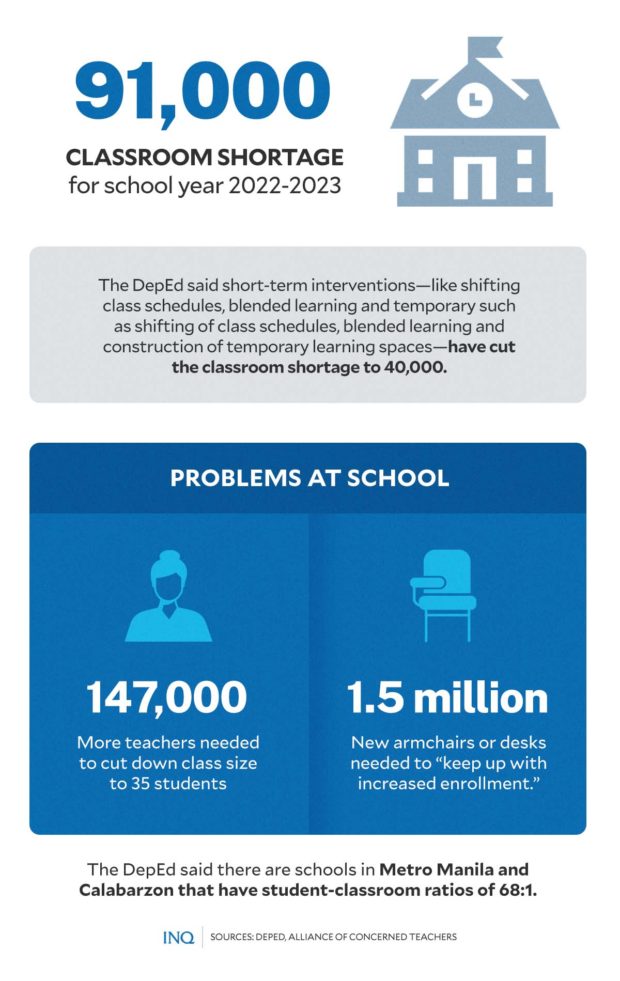 Based on data from the DepEd, the initial classroom shortage for this school year (2022 to 2023) was 91,000, but with “short-term interventions” such as shifting of class schedules, blended learning and construction of temporary learning spaces, the lack of classrooms was lessened to 40,000.

However, ACT said “every class held in a condemned/dilapidated/unfinished building, gymnasium, tent, or other makeshift classroom proves the government’s failure to provide our students with safe and conducive learning environments.”

This, as it revealed that in Daanbantayan Central Elementary School in Cebu, “open tents that are not conducive for the conduct of classes” are being used as makeshift classrooms. 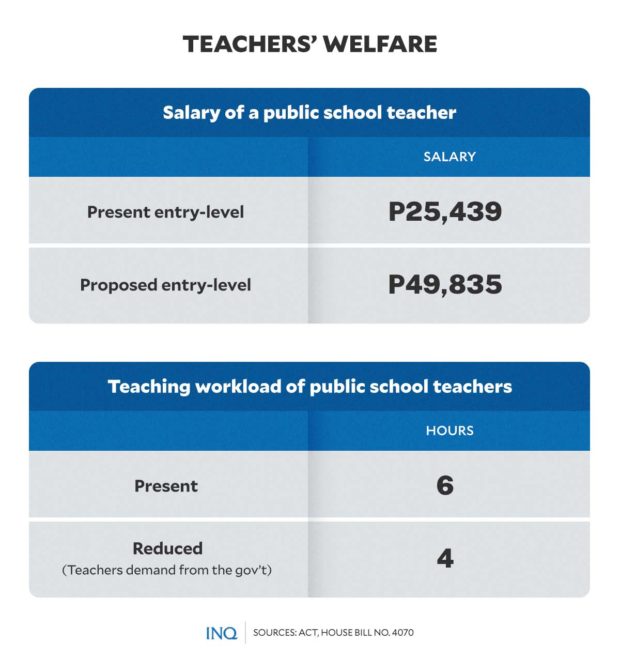 Likewise, ACT had said the government needs to hire 147,000 more teachers to lessen class size to 35 students as the DepEd previously shared that some schools in Metro Manila and Calabarzon have student-classroom ratios of 68:1.

It stressed that there is also a need for the government to buy 1.5 million new armchairs or desks “to keep up with increased enrollment,” especially since teachers in Metro Manila revealed that the lack of chairs is a problem confronting many schools in the Philippines.

There are also calls to ease the workload of teachers from the present six hours to only four hours a day, saying that “we need our rightful time to rest.”

Republic Act No. 4670, or the “Magna Carta for Public School Teachers,” provides that teaching hours for teachers shall not be more than six hours every day.