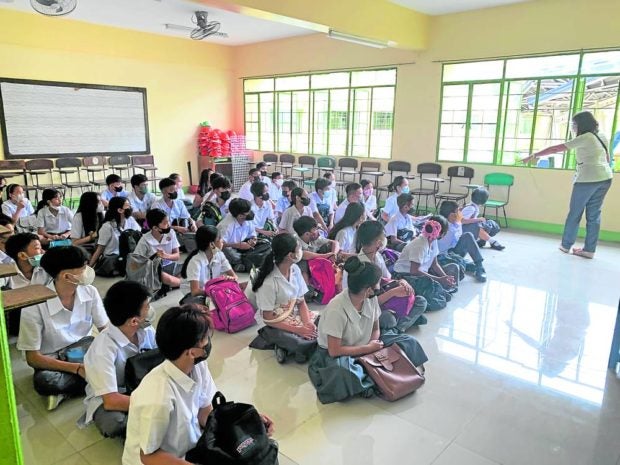 FLOORED Grade 7 students in Manila’s Jose Abad Santos High School sit on the floor on their first day back on campus, although a school official tells the Inquirer there are enough chairs for all their students. —JANE BAUTISTA

That in effect was the confirmation Tuesday from faculty members and employees of a public high school in Manila of a report about a shortage of chairs at their school that education authorities labeled as fake news.

Nestor Reyes, the President of the Jose Abad Santos Faculty and Employees Association (JASHSFEA), said photos showing Grade 7 students sitting on the floor due to a shortage of chairs were not fake news.

(The problem of insufficient chairs and other equipment is not only a problem in our school but also in other schools.)

(The post which has gone viral on social media is not fake news. It is just one of the problems experienced by teachers, children, parents, and school administration during the first day of classes.)

Reyes was referring to the post of Philippine Daily Inquirer reporter Jane Bautista on Monday, showing photos of Grade 7 students in the Jose Abad Santos High School in Manila City sitting on the floor for their in-person classes “due to the shortage of armchairs.”

Due to the shortage of armchairs, Grade 7 students from Jose Abad Santos HS in the City of Manila are seated on the floor for the first day of their in-person classes. @inquirerdotnet pic.twitter.com/9ky5DKLPdd

The Department of Education-National Capital Region (DepEd-NCR) has since tagged the post as “malicious and fabricated” meant to “malign” the teachers and school officials of the Jose Abad Santos High School.

It said the teacher in the photo “deliberately rearranged” the chairs for a group activity or orientation and psychosocial support tasks.

The agency also said the school has enough chairs to accommodate the learners, with an average of 51 chairs per classroom.

The Manila Public Information Office also called the photos “fake news” in a Facebook post that has since been deleted.

Bautista said she and the Philippine Daily Inquirer’s editors stand by her story, asserting the reporter had no intention to malign the school as Bautista only reported what she witnessed in the school, “which is the lack of preparation for the students’ first day in school.”

I'm being tagged to issue a public apology because the DepEd Manila and its LGU released a statement last night calling my report "fake news." I just wanted to let my followers know and whoever will see this that I and my editors stand by my story. https://t.co/soBKsbYXfj

According to Reyes, the shortage of chairs is not unique to the current school year but occurred before the COVID-19 pandemic when classes were physically held.

(We should look at the issue more deeply and not disseminate that this is fake news.)

The Alliance of Concerned Teachers (ACT), meanwhile, supported the statement of the school’s faculty and employees, saying some of the teachers indeed confirmed that some classes do not have enough chairs for students while others have dilapidated chairs.

Some teachers likewise shared that the school head was even compelled to borrow chairs from other schools to augment the deficiency, according to ACT.

(Regarding insufficient supplies, our teachers and local education officials don’t need to be defensive because it’s true.)

(It is the government’s responsibility to provide the needs of education, and it is the responsibility of the DepEd Central Office to make sure that these supplies will be bought, which are provided under funds for basic education facilities.)

Quetua said that the case of Jose Abad Santos High School is not isolated, citing numerous reports that ACT received about lacking armchairs and desks.

The ACT chairman has asked Congress to look into the problem, claiming that many students have complained about having to sit on broken or otherwise inadequate plastic chairs, in addition to the widespread shortage of any chairs.

“In the spirit of accountability, the DepEd should report on how many armchairs and desks it has procured in recent years to prepare for the resumption of face-to-face classes,” Queta said, stressing that DepEd was given a budget of P1.833 billion and P1.115 billion for school desks, furniture, and fixtures in 2021 and 2022, respectively.

“Does the 2023 National Expenditures Plan contain enough allocations to fill up the shortage?” Quetua asked.