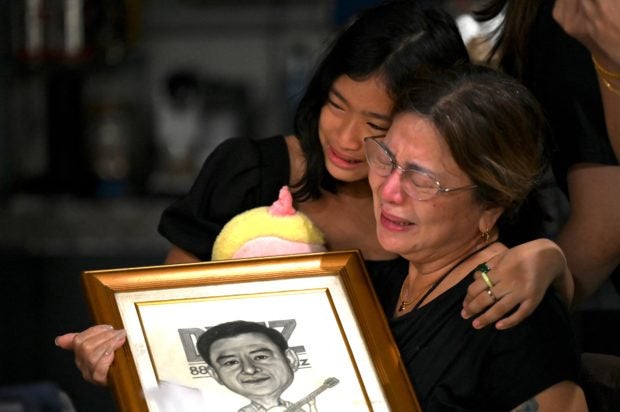 MANILA, Philippines – For the third straight year, the Philippines maintained its spot as the seventh worst country in convicting killers of journalists, according to a report released by a global media watchdog on Wednesday.

The annual Global Impunity Index of the Committee to Protect Journalists (CPJ), a New York-based organization tracing attacks against media, saw no movement in the ranking of the Philippines, with 14 murders still unsolved.

Only countries with five or more unsolved cases are included on the CPJ index.

For this report, CPJ monitored unsolved journalist killings that occurred across the globe between September 1, 2012 and August 31, 2022 – from the administration of late and former President Benigno “Noynoy” Aquino III to that of current President Ferdinand “Bongbong” Marcos Jr.

“The election of President Ferdinand Marcos Jr. brought hope of a shift away from outgoing President Rodrigo Duterte’s campaign of intimidation and harassment of the press,” the CPJ said in its report.

It noted, however, that the brazen murders of two tough-talking radio broadcasters – Percival Mabasa and Renato Blanco – since Marcos took the country’s helm in late June “raised fears that the culture of violence and impunity will endure.”

Somalia topped the list as the worst country for prosecuting journalist murderers for the eighth straight year with 19 unsolved killings, according to the CPJ.

The next countries in descending order with the highest tally of unsettled media-related murders are Syria, South Sudan, Afghanistan, Iraq, and Mexico.

After the Philippines, Myanmar debuted on the list at the eighth place followed by Brazil, Pakistan, and India. 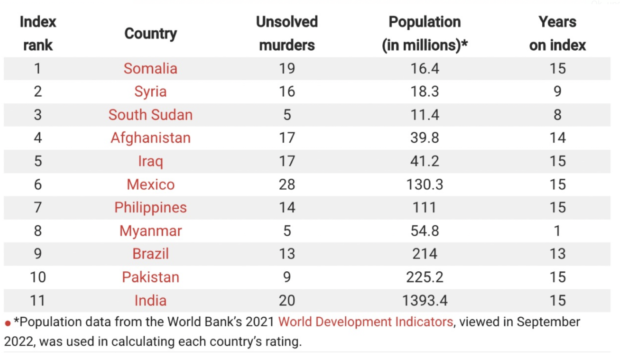 Getting away with journo murders

The CPJ’s 2022 Global Impunity Index pointed out that the majority of the killers of journalists have still not been held accountable for their crime.

“In nearly 80 percent of the 263 cases of journalists murdered in retaliation for their work globally over the past decade, the perpetrators have faced no punishment,” it said.

From the total number of murdered journalists examined in the CPJ report, 148 were threatened, 47 were taken captive, and 20 were tortured prior to their murder.

From Top 5 now 7: PH improves rank in list of deadliest countries for journos