From Top 5 now 7: PH improves rank in list of deadliest countries for journos 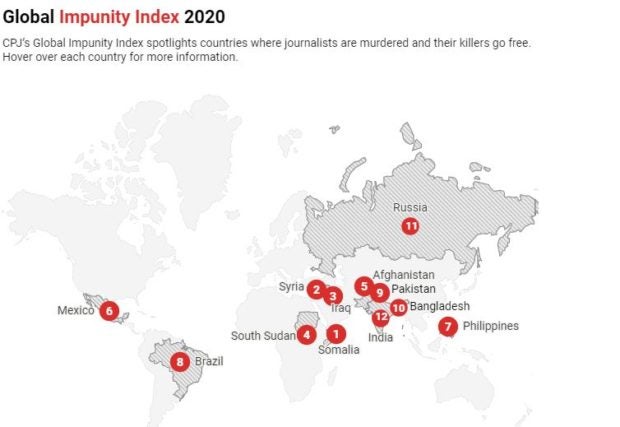 MANILA, Philippines — After placing fifth last year, the Philippines is now out of the top five countries considered most dangerous for journalists, according to the Committee to Protect Journalists (CPJ).

In its Global Impunity Index 2020 released Wednesday, the Philippines improved its ranking by placing seventh out of the 12 countries included in the list, with the CPJ calling the country the “biggest mover.”

The country has stayed in the fifth spot from 2017 to 2019 and has been a mainstay in the global impunity index’s conception since 2008.

According to the watchdog group, the Philippines’ improvement was because of the conviction of the former Maguindanao mayor Datu Andal Ampatuan Jr., his brother Zaldy, and their accomplices for the gruesome murder of 58 people—32 of whom were from the media—during the Maguindanao massacre in November 2009.

“Landmark convictions late last year led CPJ to adjust the status of the Ampatuan cases to ‘partial impunity’ from ‘full impunity’ previously – meaning that they would no longer have figured into the index calculation regardless of the time frame,” the CPJ said.

There are currently 11 unsolved murders of journalists in the Philippines, the CPJ noted.

While the Philippines ranks seventh, Somalia was named the number one country most deadliest for journalists, followed by Syria, Iraq, South Sudan, Afghanistan and Mexico.

The Presidential Task Force on Media Security, meanwhile, welcomed the country’s ranking in the index.

“We shall remain steadfast in our commitment to protect and promote media security by all means legally possible, relentless in the face of adversity,” task force chairman and Justice Secretary Menardo Guevarra said in a statement on Thursday.

Such was also the reaction of media security task force executive director Joel Sy Egco, saying: “In spite of the many challenges our media workers are facing right now due to the pandemic, the country has a reason to be happy for this very welcome development.”

“However, we will not rest until we are completely out of this list and until the day that no more media worker had to be killed in the name of his sacred duty and regardless of motive,” he added.