State of calamity declared over Calabarzon, Bicol, Western Visayas, BARMM due to Paeng 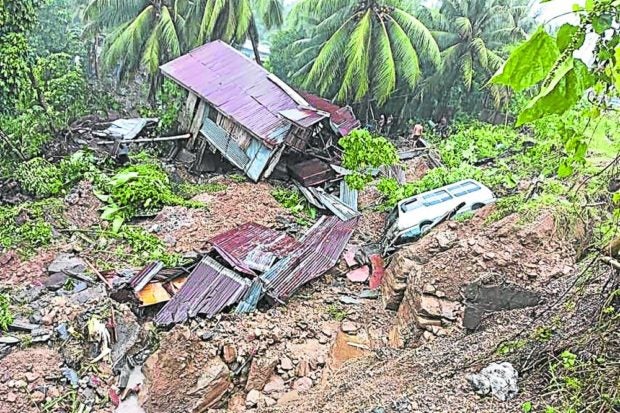 FILE PHOTO: A landslide triggered by heavy rains in Parang town, Maguindanao, on Friday, October 28, 2022, shows the almost nationwide extent of the damage wrought by Tropical Storm Paeng (international name: Nalgae), whose fury may yet be fully felt this weekend in other parts of the country. Photo provided by the Philippine Marines. —AFP

MANILA, Philippines — Four regions were placed under a state of calamity due to Severe Tropical Storm Paeng (international name: Nalgae).

The state of calamity will be in effect for six months unless earlier lifted by the President, the proclamation states.

The declaration of a state of calamity will expedite the rescue, recovery, relief, and rehabilitation efforts of the government and private sector, according to Marcos.

It would also allow the national government and local governments to use appropriate funds for calamity response as well as warrant price control for basic needs and prime commodities in the four regions.

Marcos noted the “loss of lives, destruction of property, damage to agriculture and critical infrastructures, and disruption of means and livelihood and normal way of life of the populations” in areas ravaged by Paeng, which pummeled the country – from Luzon, Visayas, and Mindanao, over the weekend.

More than 1.4 million people in the four regions were affected by the tropical cyclone, Marcos said.

Based on latest government data, the death toll due to Paeng rose to 121 as more than 3 million individuals were affected by the calamity.

Agricultural damage due to Paeng was pegged at P1.2 billion while the cost of property or house damage was approximately at P12.7 million.

Aside from the four regions, 164 cities and municipalities were declared under a state of calamity through separate proclamations issued by various local governments before Marcos signed Proclamation No. 84.

Marcos earlier said that declaring a one-year state of national calamity due to Paeng is “not necessary.”