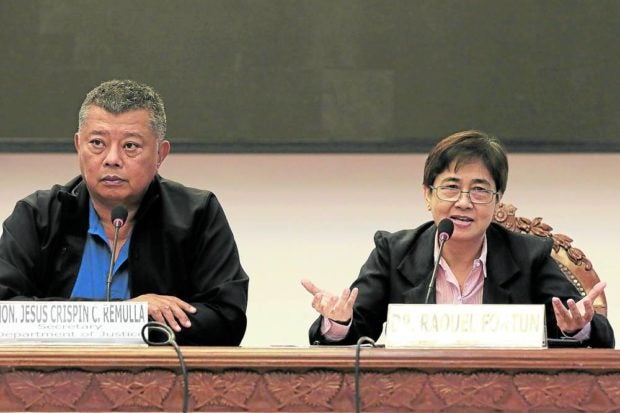 FOUL PLAY Based on the second autopsy, forensic expert Raquel Fortun (right) has found that Cristito Villamor Palaña, an alleged middleman in journalist Percival Mabasa’s killing, died of suffocation, likely from a plastic bag over his head. Justice Secretary Jesus Crispin Remulla said the masterminds would be named soon. —RICHARD A. REYES

MANILA, Philippines — An independent autopsy by top forensic pathologist Raquel Fortun on the body of Cristito Villamor Palaña, an alleged middleman in the assassination of broadcaster Percival “Percy Lapid” Mabasa, has bolstered conjectures of foul play in his death at New Bilibid Prison in Muntinlupa City on Oct. 18.

“Based on available information regarding the circumstances surrounding the death, the manner is homicide,” read part of Fortun’s pathological diagnosis, a copy of which was shared with reporters.

The esteemed doctor suggested, based on supporting evidence, that Palaña may have suffocated from a plastic bag placed over his head, as his body did not show signs of injury.

Fortun’s report appeared to conflict with the Oct. 21 statement of a Bureau of Corrections (BuCor) official that the lack of external injuries “probably [indicates] a natural cause of death or no signs of foul play.”

Her report was also more conclusive than an earlier autopsy by the National Bureau of Investigation, which did not give a specific cause of death and found “no apparent signs of external physical injury” on the body.

At a press conference on Saturday, Fortun, who was requested by Mabasa’s family to examine Palaña’s remains, made public her findings that the 42-year-old Bilibid inmate had died of asphyxia or suffocation.

The doctor cited two factors in coming up with her findings: “He [knew] he was about to die—which he did—and someone offered an explanation for the cause [of death.]”

Asked later who this informant was, Justice Secretary Jesus Crispin Remulla, who joined Fortun at Saturday’s briefing, pointed to an unnamed Bilibid inmate.

Palaña was found dead a day after Joel Escorial, the confessed gunman in Mabasa’s killing, turned himself in to the authorities and tagged him as an intermediary, along with four other accomplices, in the murder plot.

Fortun performed on Wednesday the second autopsy on the already embalmed body of Palaña six days after it was already examined by the NBI.

The pathologist earlier raised doubts about the results of the first autopsy because it lacked basic details, such as the cause of death and a clear timeline of the procedures done on the body.

Her other pertinent findings were complications in the lungs (pulmonary congestion, edema, and hemorrhages) and schistosomiasis of the liver, a parasitic disease.

Similar to the NBI’s findings, Fortun’s report found no “significant injuries,” whether internal or external, on the body.

But what was “shocking” to the forensic doctor were traces of the methamphetamine drug found in Palaña’s urine.

Remulla said the discovery of the illegal substance in the man’s urine was another significant result of the autopsy, as it confirmed the drug problem inside the NBP complex.

“The presence of methamphetamine is a factor that you should [take] note. The rumors that there’s ‘shabu’ inside Bilibid are confirmed by the fact that a person who died has ‘shabu’ or methamphetamine in his system,” he said.

The justice chief said that he would ask Gregorio Catapang Jr., the acting chief of the BuCor, to conduct a separate investigation into this matter.

Fortun also expressed alarm over the discovery of parasitic infection in Palaña, urging authorities to look into this health concern among detainees at NBP.

“You know these people die of noncommunicable diseases as well. Wouldn’t you want to check the jails? We don’t want our inmates to be dying,” she said.

With the new set of findings, Remulla declared that the Mabasa case was in the “last phase of the investigation,” as authorities were training their sights on “two masterminds,” whom he refused to name on Saturday.

“This case is almost over. It’s [now just a] matter of filing the cases and probably being able to identify masterminds in this case,” the justice chief told reporters.

He said he believed “there was nothing inconsistent” between the findings of the NBI and Fortun.

If anything, he said, Fortun’s report “gave a clearer picture” of the circumstances surrounding Palaña’s death.

Two unidentified sisters of Palaña had been placed under government protection.

One of them had revealed to authorities that her brother told her that he might die after Escorial pointed to him as a middleman in his confession to the police.

A total of 12 “persons of interest,” including seven more people who could corroborate foul play as the true cause of death, are now in custody, Remulla said.

“What is important now with the seven [people] in custody is they can validate that Jun Villamor was actually killed,” he said, using Palaña’s prison name.

Remulla assured the public that the probe would only “push forward and further and it will not stop here.”

On Oct. 3, Mabasa, a tough-talking radio commentator with a large social media following, was shot dead by a gunman on a motorcycle as he was driving his car on the way to his studio in Las Piñas City.

He was the second journalist to be killed under the Marcos administration.

‘I’m not that optimistic’: Percy Lapid’s brother fears justice will be elusive