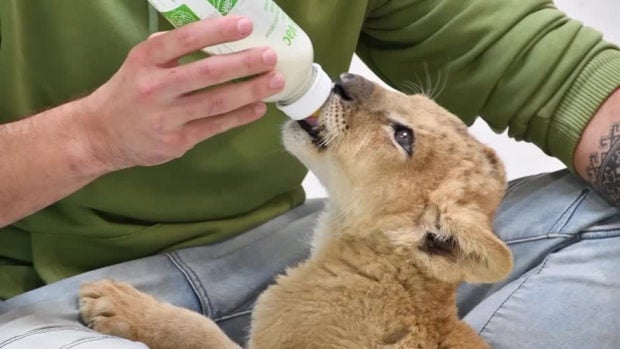 A lion cub from war-torn Ukraine has found safety in a Polish zoo, the International Fund for Animal Welfare (IFAW) said, after surviving drone attacks and bombing in the first few months of their lives. (Reuters)

WARSAW — Four lion cubs and a black leopard cub from war-torn Ukraine have found safety in a Polish zoo, the International Fund for Animal Welfare (IFAW) said, after surviving drone attacks and bombing in the first few months of their lives.

The cubs were transferred to animal rescue organisations in Kyiv and Odessa after a crackdown on the exotic pet trade in Ukraine, and are now in Poznan zoo in western Poland awaiting onward travel.

“An estimated 200 lions live in private homes (in Ukraine) and as the war rages on, they face increasingly grim outcomes,” Meredith Whitney, Wildlife Rescue Program Manager at the IFAW said in a statement.

IFAW said it had partnered with a sanctuary in the United States and one in Europe to care for the cubs, who were bred in captivity and cannot be released into the wild.

The Wildcat Sanctuary (TWS) in the United States will take care of the lion cubs.

“We were thrilled to be able to offer these cubs a beautiful, one acre habitat together and hope to welcome them home soon,” said Tammy Thies, the founder and executive director of the sanctuary.