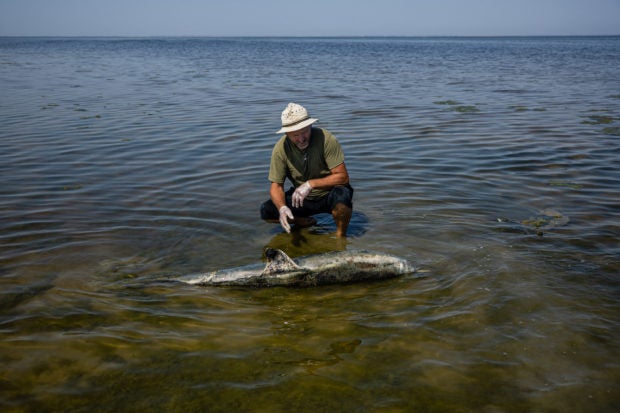 Scientist Ivan Roussev examines a dead dolphin at the Limans Tuzly Lagoons National Nature Park, near the village of Prymorske on August 28, 2022, amid the Russian invasion of Ukraine. AFP

PRYMORSKE, Ukraine — Pacing up and down a beach of fine white sand on the Black Sea coast, 63 year-old Ukrainian scientist Ivan Rusev breathes a sigh of relief: he did not find any dead dolphins today.

A few moments earlier he had rushed towards what he thought was a stranded dolphin. Mercifully it turned out only to be “tangled fishing gear”.

Rusev spoke to AFP from the Tuzly Estuaries National Nature Park, a protected area of 280 square kilometers (108 square miles) in the Bessarabia region of south-west Ukraine.

Rusev, whose weather-beaten face is shaded by a hat he brought during adventures in central Asia, is the scientific director of the park.

Now his job entails walking every morning along beaches bordered by anti-tank mines in search of the dolphins that have been washing up here since the beginning of the war.

“We only found three dolphins over our entire 44 kilometers (27 miles) coastline last year,” he tells AFP.

“This year, over the five kilometers (3 miles) that we can still access, we already found 35 of them.”

Much of the coastline has been off-limits to employees of the park since Ukrainian troops took up positions there to prevent any possible Russian sea assault.

This means Rusev and his team cannot say exactly how many dolphins have been stranded in the park or survey the full extent of the damage.

In any case, the death toll is “terrifying,” says Rusev, who has been keeping an online diary — now widely followed on Facebook — about the impact of the war on wildlife.

When dolphins started washing up on the coast in March, Rusev and his team had to get to work quickly to spot dead animals before the many jackals roaming the area got to them.

“Then, we reached out to our colleagues in Turkey, Bulgaria, Romania. Everyone witnessed the same thing: a huge number of dolphins have died since the beginning of the war,” Rusev said.

The Turkish Marine Research Foundation (TUDAV) warned in March of an “unusual increase” in dead dolphins washing ashore on the Black Sea coast.

Rusev estimates that 5,000 dolphins have been killed — about 2 percent of the total dolphin population in the Black Sea.

The Black Sea was home to an estimated 2 million dolphins during the 20th century, but fishing and pollution contributed to their decline. 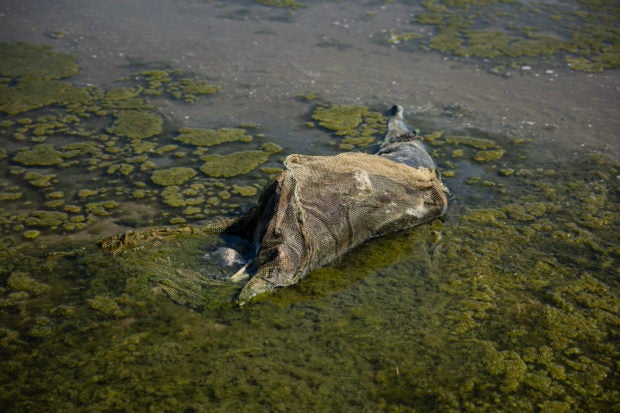 This photograph taken on August 28, 2022, shows a dead dolphin at the Limans Tuzly Lagoons National Nature Park, near the village of Prymorske, amid the Russian invasion of Ukraine. AFP

There’s no doubt in Rusev’s mind: military sonars used by Russian warships are to blame for the current bloodbath.

The powerful sonars used by warships and submarines “interfere with dolphin’s hearing systems”, he explains.

“This destroys their inner ear, they become blind and cannot navigate or hunt,” and are more susceptible to lethal disease due to their weakened immune systems, according to Rusev.

The dolphin remains do not show any trace of fishing nets or wounds, which for Rusev is further evidence ruling out the possibility they died any other way.

Russia and Ukraine are trading blame even on the environmental toll of the war, so Rusev’s theory is disputed.

Russian scientists who looked into the increase in dolphin mortality blamed morbillivirus, a common lethal disease for the species.

Rusev and his team took samples from dolphins that had recently been found and have sent them to Germany and Italy to settle the debate.

Usually Rusev sleeps in a cabin next to the entrance of the park.

Today, the carcass of a dead dolphin lies next to his cabin, in the lagoon’s stagnant waters.

Rusev covered it with a fishing net. That way, he explains, fish will eat the flesh, and he can give the remaining skeleton to a museum.

The scientist, sometimes halting conversation to marvel at a white-tailed sea eagle or a flock of pelicans, is visibly worried.

“War is a terrifying thing,” he said. “It impacts the whole ecosystem, including species that won’t easily recover.