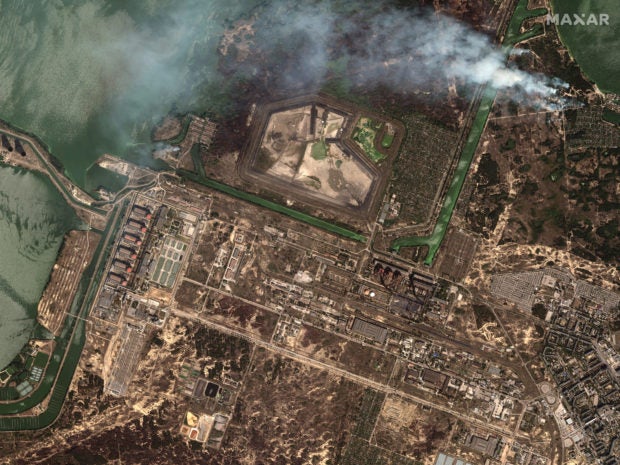 This handout satellite image courtesy of Maxar Technologies released on August 29, 2022, shows the Zaporizhzhia nuclear power plant in Enerhodar, the plant and the surrounding area shows recent damage to the roof of a building adjacent to several of the nuclear reactors. AFP

MYKOLAIV, Ukraine/KYIV — Ukraine said it broke through enemy lines in several places near the southern city of Kherson as it pressed a new campaign to retake territory while Moscow said Kyiv’s counter-offensive had failed as Russia shelled the port city of Mykolaiv.

Kyiv’s move came after several weeks of relative stalemate in a war that has killed thousands, displaced millions, destroyed cities and caused a global energy and food crisis amid unprecedented economic sanctions.

“I should note today the (Russian) defenses were broken through in a few hours,” said Oleksiy Arestovych, a senior adviser to Ukrainian President Volodymyr Zelensky.

Ukrainian forces were shelling the ferries that Moscow is using to supply a pocket of Russian-occupied territory on the west bank of the Dnipro river in the Kherson region, he added.

But a Ukrainian barrage of rockets left the Russian-occupied town of Nova Kakhovka without water or power, officials at the Russian-appointed local authority told RIA news agency.

Fresh Russian shelling of Mykolaiv, which has remained in Ukrainian hands despite repeated Russian bombardments during the war, killed at least two people, injured some 24 others and wiped out homes, city officials and witnesses said on Monday.

A Reuters correspondent reported a strike hit a family home directly next to a school, killing one woman.

The owner of the property, Olexandr Shulga, said he had lived there his entire life and that his wife died when she was buried in debris.

“It hit and the shockwave came. It destroyed everything,” he told Reuters.

The conflict, the biggest attack on a European state since 1945, had largely settled into a war of attrition, mainly in the south and east, marked by artillery bombardments and air strikes. Russia captured swathes of the south early on.

Ukraine’s southern command said on Monday its troops had started offensive actions in several directions in the south, including in the Kherson region which lies north of the Russian-annexed Crimean peninsula.

Ukraine had struck more than 10 sites in the past week and “unquestionably weakened the enemy,” according to a spokeswoman who declined to give details of the offensive, saying Russian forces in the south remained “quite powerful.”

More than six months into the invasion, Ukraine has been using sophisticated Western-supplied weapons to hit Russian ammunition dumps and wreak havoc with supply lines.

Russia says it is waging a “special military operation” in Ukraine to rid it of nationalists and protect Russian-speaking communities. Ukraine and the West describe Russia’s actions as an unprovoked war of aggression.

The world is scrambling to avoid a disaster at the Russian-occupied Zaporizhzhia nuclear plant, Europe’s largest nuclear plant, where both sides have traded accusations of shelling in its vicinity.

A mission from the International Atomic Energy Agency (IAEA) to the facility, captured by Russian forces in March but still run by Ukrainian staff, was due to arrive in Kyiv on Monday and start work in the coming days, Ukraine said.

It will also “perform urgent safeguards activities,” a reference to keeping track of nuclear material.

The Kremlin said the IAEA mission was “necessary” and urged the international community to pressure Ukraine to reduce military tensions at the plant. The mission must do its work in a politically neutral manner, Russia’s foreign ministry said.

The United Nations, United States and Ukraine have called for the withdrawal of military equipment and personnel from the complex to ensure it is not a target.

“We continue to believe that a controlled shutdown of the Zaporizhzhia nuclear reactors would be the safest and least risky option in the near-term,” said White House National Security Council spokesperson John Kirby.

But the Kremlin again ruled out vacating the site.

Liliia Vaulina, 22, one of a number of civilians who had fled Enerhodar for the Ukrainian-held city of Zaporizhzhia, some 50 km (30 miles) upriver from the plant, said she hoped the IAEA mission would lead to a demilitarization of its area.

“I think that they will stop the bombing,” she told Reuters.

Ukraine on edge as shellfire resounds around Zaporizhzhia nuclear plant