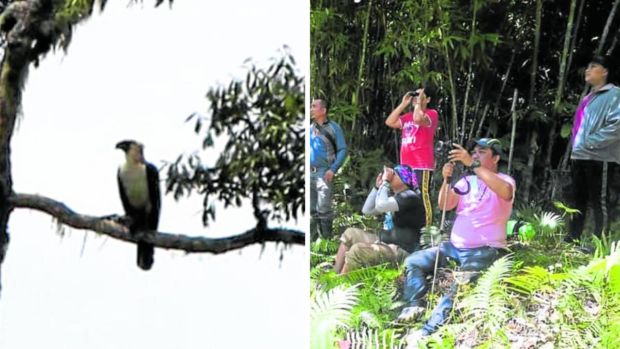 IMPORTANT FIND | A team from the Department of Environment and Natural Resources in Davao region finds this Philippine Eagle on Mt. Candalaga, an important sighting that is expected to
boost efforts to protect the endangered bird. (Photo courtesy of the DENR-Davao Region)

DAVAO CITY, Davao del Sur, Philippines — Environment officials here have confirmed the sighting of the Philippine Eagle (Pithecophaga jeffreyi) in the wild of Maragusan town in Davao de Oro province, an event that will likely boost their push for the inclusion of Mt. Candalaga range in the list of protected areas in the region.

According to a statement released by the Department of Environment and Natural Resources (DENR), Regional Director Bagani Fidel Evasco himself saw the Philippine Eagle at 10:55 a.m. on Oct. 12 perched on a tree in the forest canopy of Mt. Candalaga range.

The Philippine Eagle, one of the largest and most powerful among forest raptors, has already been listed as critically endangered by the International Union for Conservation of Nature with an estimated number of only 400 pairs left in the wild.

The raptor was seen at an elevation of approximately 1,200 meters above sea level, according to the DENR regional team, who went to Mt. Candalaga after the sighting was reported earlier in the month by environment personnel from the province and the town of Monkayo.

“The group witnessed the majestic bird of prey hovering in the forest canopy of Mt. Candalaga range and was also sighted perching on a forest tree,” the DENR statement said.

Evasco, who is eyeing to include the 2,100-m mountain in the protected areas in the region, also led the five-day reconnaissance climb to the mountain on April 30 last year to inventory the flora and fauna thriving in the area.

Among the flora they found was the endemic pitcher plant Nepenthes nebularum and an unknown Nepenthes under the N. alata group which could be new to science, according to the DENR team. They also spotted a mistletoe plant under the genus Amylotheca first found on Mt. Hamiguitan. It has yet to be published as a new species in Mindanao and the first record of the genus in the Philippines.

The endangered Rafflesia mira, one of the largest flowers in the world, was first discovered on Mt. Candalaga in 2005 although the flower was not sighted during the climb.

Fauna species that were documented include three species of beetles that were potentially new to science, an endangered Philippine Warty Pig, and frogs that included Ansonia muelleri, Leptomantis bimaculatus, and Limnonectes magnus indicating that the upper slopes of Mt. Candalaga remained pristine.

The DENR described the trail to Mt. Candalaga as “highly technical and steep,” hence, the department encouraged the local government of Maragusan to closely monitor and regulate the entry of visitors to the mountain and ensure that porters and guides were well-equipped in wilderness search and rescue. The designated campsites in the area, however, are already well established and have access to potable water sources.

According to the DENR, protected areas are a key part of the national and local responses to climate change and other environmental challenges. But before it could be included in the National Integrated Protected Areas System, the DENR said Mt. Candalaga has to be identified first as a target for Protected Area Suitability Assessment.