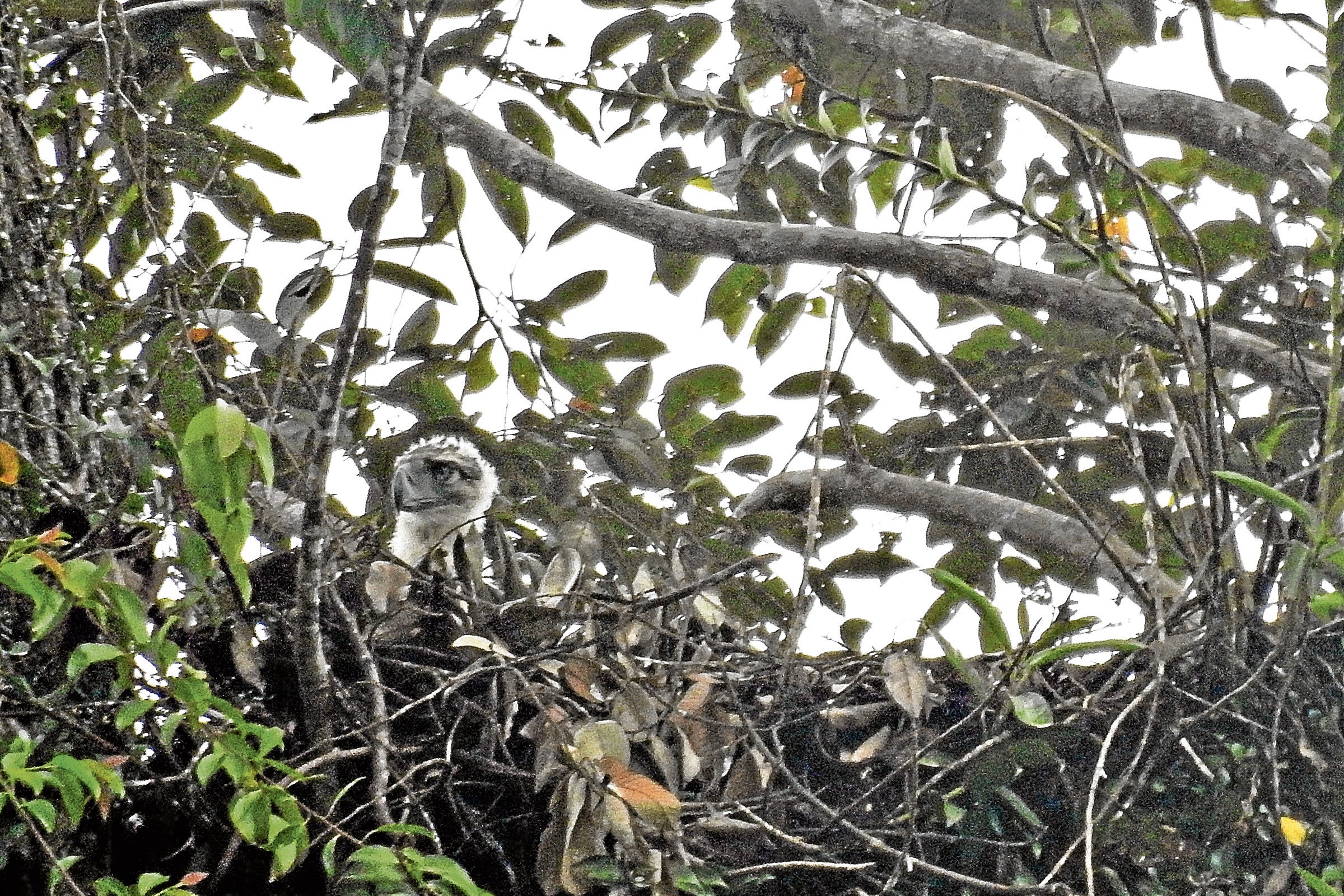 OFFSPRING A Philippine eagle chick comes out of a nest in the deep forest of Bislig City in Surigao del Sur on March 9. A team of wildlife conservationists discovered an eagle family in the area after a three-day expedition this week. —PHOTO COURTESY OF JUN FELIPE D. ARMIHAR

BISLIG CITY—Wildlife conservationists from the Department of Environment and Natural Resources (DENR) and the Philippine Eagle Foundation (PEF) confirmed on Friday the presence of a family of the endangered raptors within this city’s forests that form part of the Tinuy-an Falls Protected Landscape in Surigao del Sur province.

A team composed of personnel from the DENR in the Caraga region and PEF biologists were able to verify the presence of an eagle nest in the area while another group of tree climbers led by their guide from the Manobo tribe observed the nest from another tree, according to Dr. Jayson Ibañez, PEF’s director for research and conservation.

The team found a chick, estimated to be 2 months old, in the nest. The pair of eagles, which are thought to be its parents, were found perched on tree branches near the nest.

Ibañez said they considerd the sighting a “rediscovery” as they already found the pair more than 10 years ago.“This is very significant because, for over 10 years, we haven’t heard of any news about this pair here in Bislig. Our last confirmed sighting was in 2009,” he said.

Toward the end of last year, Ibañez said Manobo tribal leaders alerted them of a pair of eagles nesting on a huge lauan tree within the Tinuy-an forests, prompting them to organize the three-day expedition that began on Tuesday.

Further observation activities were, however, hampered by heavy rains on Wednesday.

Ibañez said the pair was first sighted in 2007.

By 2008, conservationists observed a juvenile raptor in the area, believed to be the offspring of the pair, which left the nest two years later.

The observation missions after 2009 could have missed the pair because these might have transferred to other parts of the forest.

Manobo guide Virgilio Domogoy, 50, said he saw the pair of eagles in September last year while gathering rattan. He tracked the raptors up to November then reported his sightings to the DENR.

“I heard its distinct sound so I check on the area (regularly). There were times I only saw one of them, there were also times when I saw both. My memories of the 2007 sighting was refreshed,” Domogoy told the Inquirer.

He saw the pair in 2007 and led the conservationists to their nest for the observation missions since then.

Domogoy believed that the eagles’ nest was destroyed in November 2012 during the devastating fury of Typhoon “Pablo.” But in 2018, he said he saw a large bird perched on a tree, and then in 2019 he saw large feathers dropped on the ground, raising his optimism the raptors were still there.