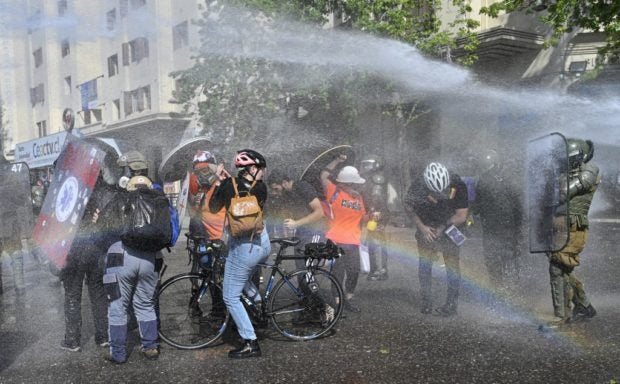 Demonstrators are sprayed with water cannons during clashes with riot police which erupted in a protest on the third anniversary of a social uprising against rising utility prices, in the surroundings of the Baquedano square in Santiago, on October 18, 2022. (Photo by MARTIN BERNETTI / AFP)

Hundreds of Chileans, mainly students, protested in Santiago Tuesday, erecting burning barricades to mark three years since a social uprising they say has not yet yielded the desired societal change.

Police deployed 25,000 officers to keep the peace, and used water cannon to disperse trouble-making demonstrators in at least one venue.

Many shops closed early, or did not open at all, while schools sent pupils home early in a country where demonstrations in recent years have frequently been marred by clashes with the security forces.

“We have gained nothing” in the three years since the movement began, said Andrea Valdebenito, a 43-year-old social worker who was among those gathered.

The protests came exactly three years after the start of a mass revolt against a rise in metro fares in 2019 that quickly escalated into a general clamor for better conditions and social equality.

The government suspended the price hike but protests continued, and dozens were killed over months of clashes. Hundreds of people were injured. 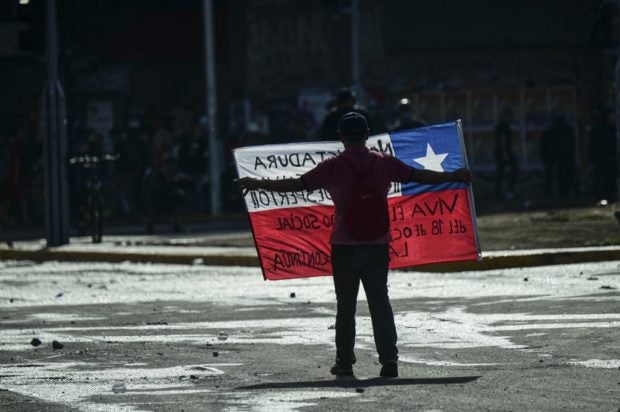 A demonstrator holds a Chilean national flag during clashes with riot police which erupted in a protest on the third anniversary of a social uprising against rising utility prices, in the surroundings of the Baquedano square in Santiago, on October 18, 2022. The sustained movement forced then president Sebastian Pinera to increase tax spending and expand social programs, resulting in 2021 in the largest increase in public spending in the country’s history at 33 percent. (Photo by MARTIN BERNETTI / AFP)

The demonstrations kickstarted reforms that included the government’s agreement to the drafting of a new constitution to replace the one inherited from the military dictatorship of Augusto Pinochet and perceived as market-friendly.

But last month, nearly two-thirds of voters rejected the proposed draft despite the new revolutionary mood, amid concerns that parts of the document were too far-reaching.

A constitutional provision to legalize abortion was a key stumbling block in the conservative, majority-Catholic country.

Boric, a former student leader who had supported the 2019 protests, on Tuesday called for a new social dialogue to give shape to much-needed social reform.

The 2019 uprising, he said, “was an expression of pain and fractures in our society that politics, of which we are a part, has failed to interpret or answer.”

Boric came to office with promises of turning the deeply unequal country into a greener, more egalitarian “welfare state.”