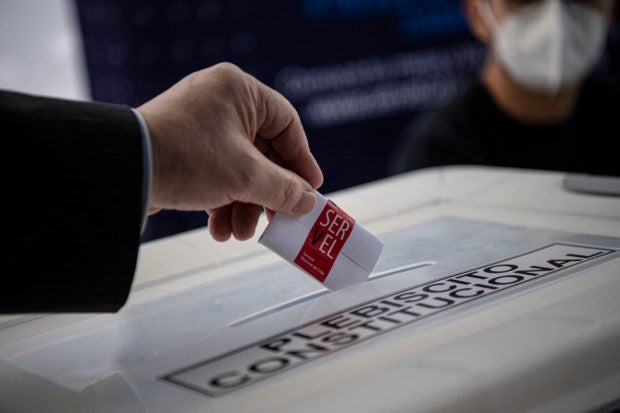 A member of the Servel (Electoral Service) shows how to cast a ballot at a polling station ahead of next Sunday’s referendum in Santiago on September 2, 2022. AFP

SANTIAGO — Chileans head to the polls on Sunday to choose whether to adopt a new constitution that aims to shift its market-driven society into one that is more welfare-based, while enacting broad institutional reforms.

Although Chileans previously voted in droves for a rewrite of the current constitution — adopted in 1980 during Augusto Pinochet’s dictatorship — opinion polls suggest the new text will be rejected.

Social upheaval that began in 2019 as tens of thousands of people demanded a more equitable society provided the impulse to overhaul the constitution, but several clauses of the 388-article proposed draft have proved controversial.

“I will reject it because it was a constitution that started badly,” Maria Angelica Ebnes, a 66-year-old homemaker, told AFP in Santiago.

“It was forced, through violence.”

In October 2019, protests sprung up mostly in the capital led by students initially angered by a proposed metro fare hike.

Those demonstrations spiraled into wider discontent with the country’s neoliberal economic system as well as growing inequality.

Although polls predict the new constitution will be rejected, those in favor are still holding out hope, not least because of what they see on the streets.

On Thursday night, an estimated 500,000 people turned out for the official closing of the “approve” campaign in Santiago, whereas no more than 500 people did so for the “reject” gathering.

“People will go out to vote en masse and the polls will be wrong once again,” said Juan Carlos Latorre, a legislator in the ruling coalition of leftist President Gabriel Boric, who supports the new text.

More than 15 million Chileans are eligible to vote in the compulsory referendum.

Chief among their concerns is the prominence given to the country’s Indigenous peoples, who make up close to 13 percent of the 19 million population.

Proposals to legalize abortion and protect the environment as well as natural resources like water, which some say is exploited by private mining companies, have also garnered much attention.

The new constitution would also overhaul Chile’s government, replacing the Senate with a less powerful “chamber of regions,” and requiring women to hold at least half of positions in public institutions. 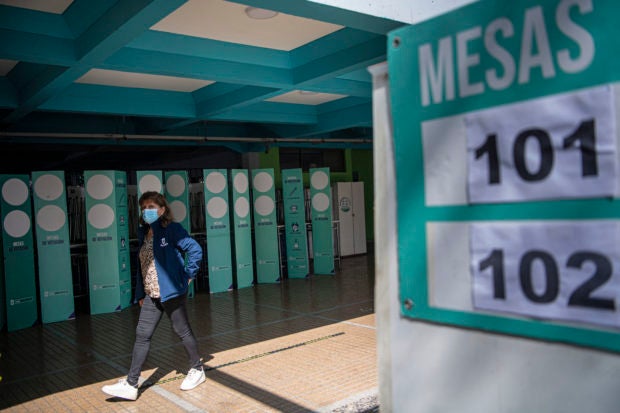 A worker of the municipality of Providencia prepares a polling station ahead of next Sunday’s referendum in Santiago on September 2, 2022. AFP

While recent polls have had the “reject” vote leading by as much as 10 percentage points, sociologist Marta Lagos believes “approve” may yet carry the day.

In the vast Santiago metropolitan area, the majority of people appear likely to vote in favor of the new constitution, even though some parts of the city — particularly in northern and southern areas — are largely against the changes, Lagos said.

“There’s always the possibility that all the polls are wrong and effectively the advantage for ‘approve’ in Santiago could compensate for the disadvantage in the north and south,” Lagos told AFP.

“I don’t think this possibility is more than five percent, and ‘reject’ is 95 percent likely to win.”

But what she is certain about is that “the gap will not be 10 points like the three polls published in the last two weeks say.”

Only a simple majority is required for the new constitution to be adopted.

Around 40 world-renowned economists and political scientists expressed their support for the new constitution in the last week.

Yet some fear the new text would generate instability and uncertainty, which could then harm the economy.

“What you can see is a certain conservatism in the Chilean electorate that we haven’t seen for years,” said Lagos.

It was certainly muted last December when millennial Boric was elected president. 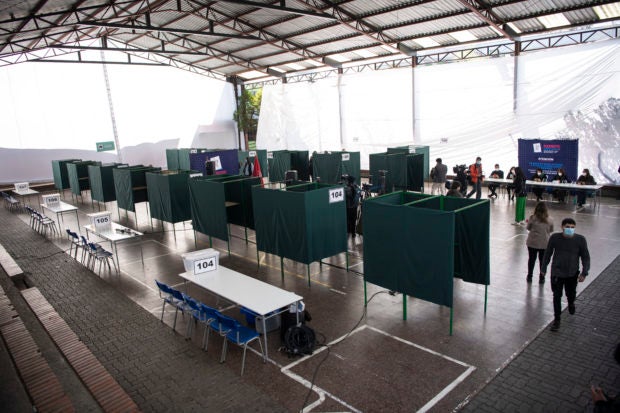 Workers of the municipality of Providencia prepare a polling station ahead of next Sunday’s referendum in Santiago on September 2, 2022. AFP

Those in favor of the new constitution say it will prompt major changes in a conservative country marked by social and ethnic tensions and lay the foundation for a more egalitarian society.

They say the current constitution gave private enterprise free reign over crucial industries and created a fertile breeding ground for the rich to prosper and the poor to struggle.

Although the 1980 constitution has undergone several reforms since it was adopted, it retains the stigma of having been introduced during a dictatorship.

Chileans have already voted once to rewrite the constitution and then again to elect the representatives to do so, making Sunday’s vote the third time in just two years that they have gone to the polls over this issue.

The new text was drawn up by a constitutional convention made up of 154 members — mostly with no political affiliation — split equally between men and women and with 17 places reserved for Indigenous people.

It is the most controversial clause, with some critics accusing the authors of trying to turn the traditionally marginalized Indigenous people into a higher class of citizens.

If accepted, Chile’s congress will then start deciding how to apply the new laws.

If the new text is rejected, the current constitution will remain in place.

Chile’s dictatorship-era water code is getting a makeover