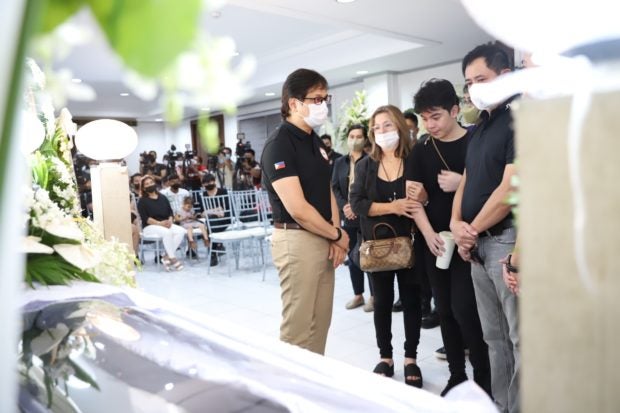 Interior Secretary Benhur Abalos attends the wake of slain radio commentator Percy Lapid on Wednesday, Oct. 5, 2022. (Photo from the Department of the Interior and Local Government)

MANILA, Philippines — Interior Secretary Benjamin Abalos Jr. is offering a P500,000 reward to anyone who could provide “valuable information” on the killing of radio commentator Percival Mabasa, more popularly known as Percy Lapid.

The Department of Interior and Local Government (DILG) announced that Abalos offered the reward after visiting Lapid’s wake on Wednesday.

“Expressing that freedom of information is essential in the country, Abalos stated that he is offering a P500,000 reward for valuable information that can help solve the incident,” the DILG statement says.

Abalos repeated his promise that the DILG would pursue justice for the slain journalist with the help of the Philippine National Police (PNP).

“The heads of the DILG and the PNP condole with the bereaved kin of Percy Lapid. The DILG and PNP will not stop until this case is immediately resolved,” Abalos said in Filipino.

Gen. Rodolfo Azurin Jr., the PNP chief, was also among those who paid a visit to Lapid’s wake.

“I gave [the Lapid family] the assurance that the police will focus on investigating the case until we catch identify, and file cases against all those involved in his killing” Azurin said in Filipino in a video sent to reporters.

Azurin also noted that he had ordered the Southern Police District to dissect all possible angles in determining  who might be involved in Lapid’s death.

The PNP earlier vowed to bring justice for Lapid, who was known to be a staunch critic of the Duterte and Marcos administrations.

Lapid was shot dead Monday night by a motorcycle-riding assailant at a gate of BF Resort Village in Las Piñas City.

Another person aboard a Toyota Fortuner, believed to be an accomplice, was seen to have bumped the rear portion of Lapid’s Toyota Innova before the shooting happened, according to the police.